It’s not so long since Broadway’s leading diva graced the stage at the intimate venue tucked away in a side street just off the West End’s busiest piazza, and here she is again, doing a brief residency, with old mate and fellow New Yorker, the inestimable Seth Rudetsky, on the piano and asking (most of) the questions in casual, off-the-cuff chat show mode between the musical numbers.

After a smashing curtain raiser of ‘When Did I Fall In Love?’, it quickly became apparent that Miss McDonald was not travelling alone. Her backstage entourage consisted of her children, sixteen-year-old daughter and suckling babe of a mere five months. Rudetsky and McDonald have known each other since their student days, and there is an ease and familiarity between them, a meeting of minds as well as creative souls, that makes for particularly open, frank and free discussion of whatever topics arise in these spontaneous, unscripted and strictly one-off encounters. Each night will offer a different programme of wildly eclectic repertoire… and talk. 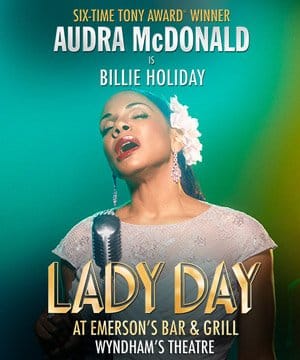 Jeff Blumenkranz’s charming ‘I Won’t Mind’ followed, and that relative novelty confirmed McDonald’s ability to pioneer new material and make it her own. Everything, of course, at some point has been new, and she drew equally fresh and exciting sounds from the old standard (with a strong UK connection), ‘I Could Have Danced All Night’, for which the audience was co-opted as sing-a-long chorus – a particular treat for all Audra fans, who can now go to their graves saying, with complete sincerity, that they have worked with her in the West End. Not stopping at this, Audra used the chance to talent spot, and we were all introduced to the lead singer from ‘The Restless Breed’ (who cover ‘Journey’, amongst others), who happened to be sitting – and singing – in the front.

The capacity audience then got a whole load of Jason Robert Brown’s ‘I’ll Give You The Moon And The Stars’ from ‘Songs For A New World’. Audra told the story with compassion and honesty, but – once again – one could not avoid the creeping sensation that JRB simply doesn’t like women that much. He is, it seems, destined to be the Strindberg of musical theatre songwriters, always leaving a faintly bitter taste in the mouth.

Refreshment from that acerbity came in the form of two songs from Gabriel Kahane’s ‘Craig’s List Lieder’: witty, clever, urbane and not to be taken at all seriously. These built up into the stage holding ‘The Glamorous Life’ from ‘A Little Night Music’, and then more Sondheim (as Seth helpfully pointed out, recently filmed in London), ‘Time To Leave The Woods’. We then moved into a snazzy rendition – by way of some affectionate mimicry of ‘Lisha’ – of ‘Maybe This Time’, which again McDonald managed to mint entirely anew, especially with her cry of desperation saved up for the very last, culminating note.

The intelligence and economy of her artistry seems to have been born early, as we discovered in her recreation of the closing moments of an early triumph, ‘Hansel and Gretel’, performed when she was a seasoned performer of the 4th Grade: picture the scene, the Wicked Witch (clearly the best part in the show and a must for our Audra), having been dispatched into the oven, manages – through who knows what hocus pocus – a reanimation, and gets back onto the stage to deliver the closing number of the show, ‘They Say Love It Is A River’. She even recreated some of the actual intonation and expression she used on that unforgettable evening. A shoo-in for later stardom, clearly!

After this, we got another member of the family: as she slipped away to take care of the children backstage, onto the stage appeared also her husband, Will Swenson, who gave us a briskly (again anglophile) ‘I Am The Pirate King’, before she came back and they did a splendid duet of ‘You Don’t Bring Me Flowers’. Then Mr Swenson snuck away, to leave Audra to us and a magnificent rendition of the work of another new writer she has championed, Adam Gwon’s wonderful ‘I’ll Be There’. This was her closing number. However, Rudetsky persuaded her to give an encore and – in testament to the recent fine weather, and perhaps also influenced by having been reminded that ‘Lisha’ is the goddaughter of Ira Gershwin, we got ‘Summertime’, full of the lush, operatic gloss of a voice that, once heard, can never be forgotten. Game, set and match to Miss McDonald.

If you can get a ticket for the remaining shows, do. If not, she’ll be at the Wyndham’s as ‘Lady Day’ in June. Perfect.