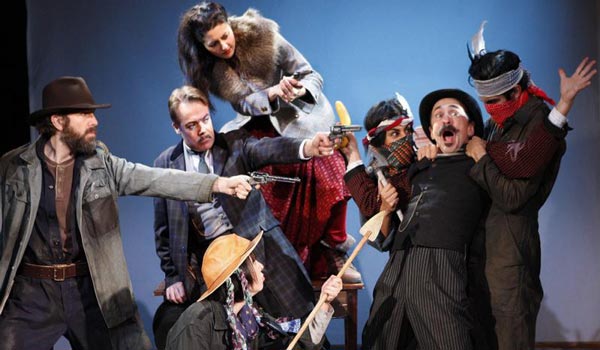 Around the World in 80 Days is one of the classic tales by Jules Verne, who in the 19th century wrote epic stories of adventure and futuristic scenarios that still captivate the readers of today. This production at the St James Theatre until 17th January is a retelling by Laura Eason who pays due homage to the brilliance of the original whilst highlighting the contemporary relevance of the old story.

Director Lucy Bailey ensures that the pace of the performance reflects the relentless haste of the journey of Mr Phileas Fogg. This only becomes delayed when the overabundance of clever ideas overwhelms the flow of the action. This is in particular reference to the scenes at sea when there are some quite beautiful moments of business that interrupt the narrative a tad. 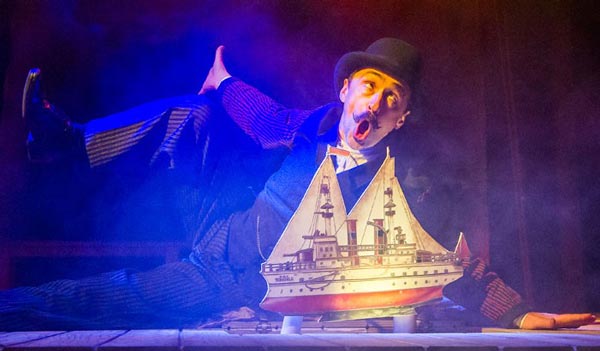 As with the innovative staging there are some wonderful design moments that become slightly over-cumbersome in effect. The set pre-show rather resembles a cross between a boxing ring, an Asian house and the old timber deck on a clipper. Hidden in the timber flooring of the raised stage are several trapdoors that are used to great effect: props, lighting, smoke and even people pop up and down at the most unexpected times.

Robert Portal plays an unflappable Phileas Fogg, just as he should be, but also allows the emotive side of the character to shine enough light to be seen or sensed when appropriate: from the restlessness in the opening scene, through the excitement of adventure into the unknown, the growing love for Mrs Aouda and the quiet triumphant ending.

Complementing the urbanity of Fogg, the volatility of his manservant Passeportout is the perfect foil. Simon Gregor delivers a very fine performance and is rewarded by the audience with love. Shanaya Rafaat completes the triangle of travellers as Mrs Aouda. She is exquisite in every way.

Tony Gardner plays the hapless Inspector Fix with a good deal of comic interpretation. There is something of an English version of Inspector Clouseau about his characterization. 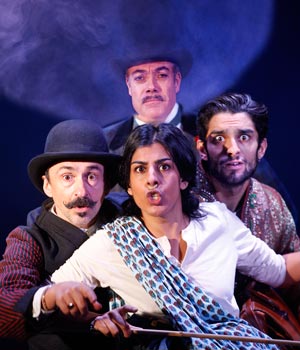 The rest of the characters, and there are many, are played by a cast of 4 actors and this is where the slickness of the production slips a little. Each of the 4 actors is a competent performer with Tim Steed deserving special mention. However the design of the show does not support the action in these sections. In costuming, the actors appear mostly in overalls that look messy and uninspiring and the props, whilst fabulous in concept, have been finished with a lack of refinement. Overall this contributes to a shortfall in the clarity of characterization in the minor parts.

This production focusses on the characters. The details of time, place and mood are for the audience to determine with the guidance of a very evocative sound design and original music by Django Bates. It is a journey well worth the hazards of the taking.

Having lived in Australia since childhood, Christine returned to the UK this year to perform in the Edinburgh Fringe Festival and decided to stay. She has been active in theatrical life for many years, working both onstage and as a director, choreographer and vocal coach. Christine has taught Performing Arts in schools for the last 20 years, specialising in creating large scale productions, and in directing choirs. She counts an annual concert of 600 voices as her favourite day of the year. She is excited to be exploring the enormous breadth and depth of British theatre and anything new that her life here will offer.