Mark Ludmon reviews Ontroerend Goed’s show, Are we not drawn onward to new erA, at Zoo Southside at Edinburgh Fringe 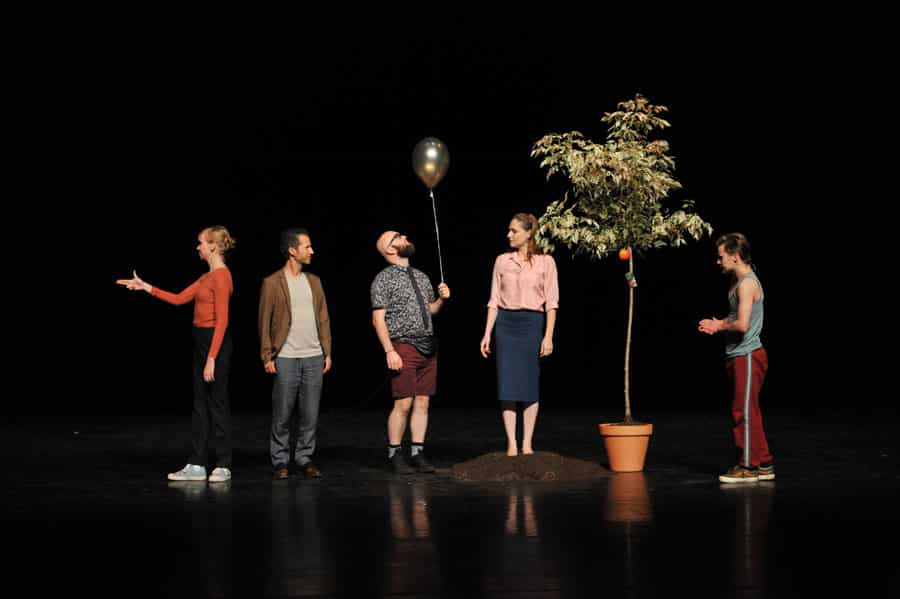 Belgian theatre company Ontroerend Goed have established a reputation internationally for their provocative, and often interactive, shows. A regular at Edinburgh Fringe, they have returned this year with one of their hits, Are we not drawn onward to new erA – a palindrome that can be read backwards or forwards. While this is not directly participatory for the audience, it is a provocative and haunting meditation on how reversible is humanity’s devastation of the planet.

The wordplay of the title is a hint of what lies in store. The show’s power and theatrical twists are best appreciated without knowing what to expect, so stop reading now if you want to avoid even the slightest spoiler. Going in cold, I was immediately drawn in by the visually striking concept as six people systematically destroy an apple tree, litter the large stage with hundreds of plastic bags and build an imposing gold statue. They are speaking a strange language: could it be the company’s native Flemish, or Russian maybe?

Even if you think you have worked out what is going on, it is only later that you realise how much you missed. It is delightful, surprising and unexpectedly moving, with technically impressive performances from the cast of Angelo Tijssens, Jonas Vermeulen, Karolien De Bleser, Leonore Spee, Maria Dafneros and Vincent Dunoyer. Directed by Alexander Devriendt with dramaturgy by Jon Martens, the show was originally devised four years ago, and premiered in the UK at Theatre Royal Plymouth, but its ideas are more timely than ever. The simplest response to this phenomenal show is just to say, “wow”.