Paul T Davies reviews Apollo 13: The Dark Side Of The Moon by Torben Betts presented online by the Original Theatre Company.

Apollo 13: The Dark Side of the Moon.
Streaming now on Original Theatre online.
4 Stars
Watch Now

“Houston, we have a problem” are five words known to many millions around the world, if mainly due to the Tom Hanks led 1995 film that recreated NASA’s aborted mission to the moon in 1970. The explosion of an oxygen tank put the mission and the lives of the men in danger, and, after initial disinterest in the mission, the world watched as the moon’s gravitational pull was used to get the astronauts home. Even if you know the outcome, Original Theatre’s technically wonderous production is a gripping ride. Torben Bett’s taut script wastes not a word, economical in what it has to say, less concerned with technical achievements, but in the human teamwork and the imagined conversation the men may have had during their minutes on the dark side of the moon, out of contact with planet Earth. Framed with an interview with the two surviving astronauts to commemorate fifty years since the mission, the play focuses on the isolation the men must have felt and many parallels are made with our pandemic age. 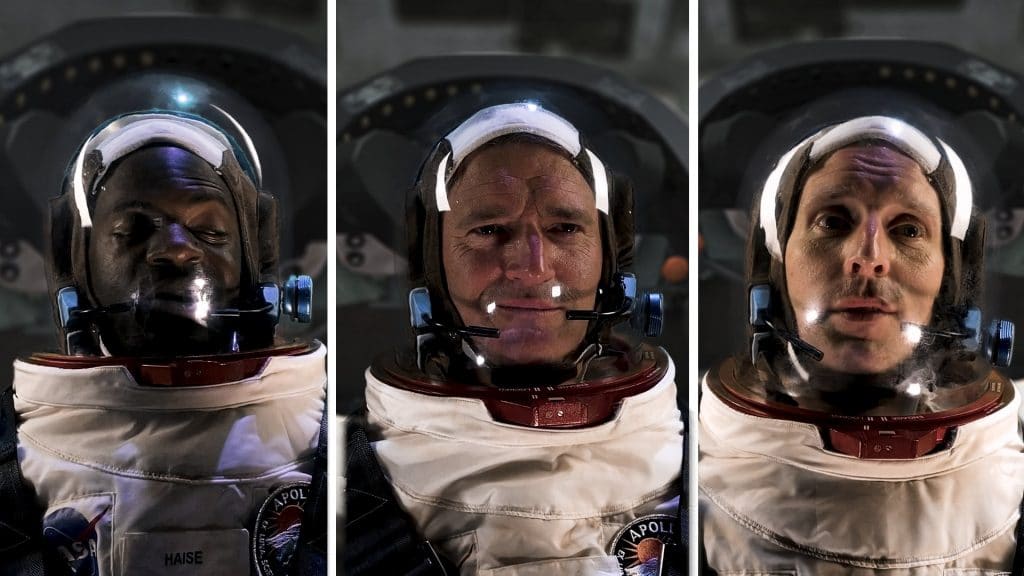 This device gives the piece a documentary feel, and, observing social distancing, the camera is tight on the actors faces, adding beautifully to the intimacy of the drama. Directors Alistair Whatley and Charlotte Peters and film director and editor Tristan Shephard shape the material beautifully, and huge praise for Sophie Cotton’s score, never overplayed and overwhelming, instead supporting the play beautifully, surging when needed, silent when necessary.

It’s a strong ensemble, with Tom Chambers as Jack Swigert, Christopher Harper as commander Jim Lovell and Michael Salami as Fred Halse, here reimagined and cast as an African American. This allows Betts to imagine a debate on the civil rights movement between Halse and the right-wing Swigert, which may lack subtlety but does allow the opening up of parallels between then and now, of how the same struggles remain. However, a reminder of the achievement of getting them home and the beauty of humanity is provided by older versions of Lovell and Halse, beautifully played by Phillip Franks and Geoff Aymer, who movingly call for us to express our love to those we care about as time is so short. Poppy Roe as the interviewer and Jenna Augen as the voice of mission control provide a female presence. It’s a highly accomplished trip, and no other men have travelled that far away from Earth, from home, as those astronauts.