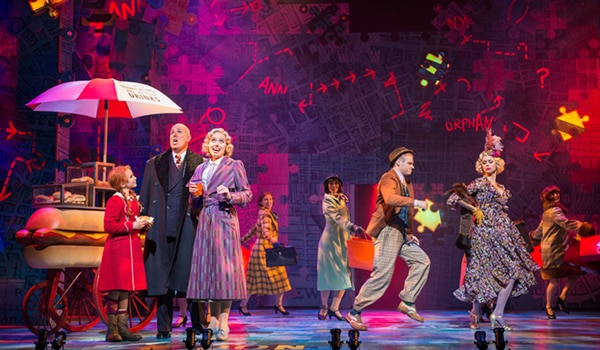 It’s hard to believe, looking the faces of the children either side of me, that we’re watching Annie – a musical dating back to the 1970s; a musical that was until recently reserved for school productions, synonymous with groans, unequivocally banished to the hall of ‘uncool’ and ‘old hat’.

Let’s be honest; it’s not the show’s enduring relevance that’s gripping these children. So what is it? Entranced, exhilarated, giving credence to each cheesy line, the reactions of these 21st century kids stand testament, simply, to the superb execution of this fresh re-imagining – this new production directed by Nikolai Foster and currently touring the UK. That’s right, folks. Annie has made a come back, and it’s delighting audiences at a venue near you.

Now, no one is pretending that Annie is high-art; it was never intended to be. It is what it is: a populist, rags-to-riches story about a sickeningly optimistic, red-headed orphan who happens to be taken in by a millionaire… sorry, billionaire. But today’s audiences are lapping it up, mesmerised by the colourful, contemporary set and costume design by Colin Richmond – not too dissimilar from that in Tim Minchin and Dennis Kelly’s Matilda currently at the Cambridge Theatre, London. 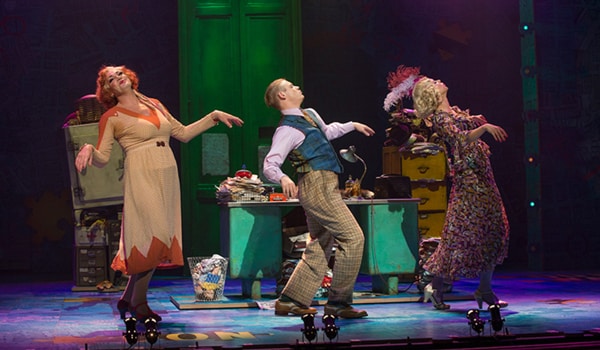 However, these confident performances are not matched in their veracity by the supposedly terrifying Miss Hannigan – played in Wimbledon by Craig Revel Horwood. Revel Horwood has all the right moves and hits all the right notes, but is too busy playing the stumbling drunk to convincingly chill these vivacious orphans into submission.

Upping the anti however are Jonny Fines and Djalenga Scott as outright villains Rooster and Lily. In each slick step and and shrill cock-a-doodle-doo, Fines exudes malice and unwavering greed. On the opposite side of the spectrum Grace Farrell, played by a pitch perfect Holly Dale Spencer, is Grace by name, grace by nature. Warbucks’ personal assistant is sassy and fiercely efficient, until Annie disrupts the peace that is, injecting new meaning into the businessman’s household.

And you can’t fail to admire the girls who, on rotation, play Annie. It’s far from an easy task, aged 11, to carry such a huge role, to deliver with clout and conviction the writers’ dewy message of optimism. There’s something altogether un-British about the mere suggestion of the sun coming out tomorrow (perhaps because it rarely does) but the extremely talented girls, and of course their dog Sandy, tricked even me into perking up a little.

Thanks to this energetic reimagining, Annie can finally escape the chorus of groans that once accompanied its name. It’s once again acceptable to hum Charles Strouse’s Tomorrow (boy oh boy!) and soak up Thomas Meehan’s saccharine rags to riches story – just as I did when I was seven. Foster’s fast-paced and punchy production – touring the UK until June 2016 – has given one very old dog a fresh lease of life, bringing Annie back for a new, let’s face it, more discerning generation. And they’ve done so with gusto.

FIND OUT MORE ABOUT THE ANNIE UK TOUR