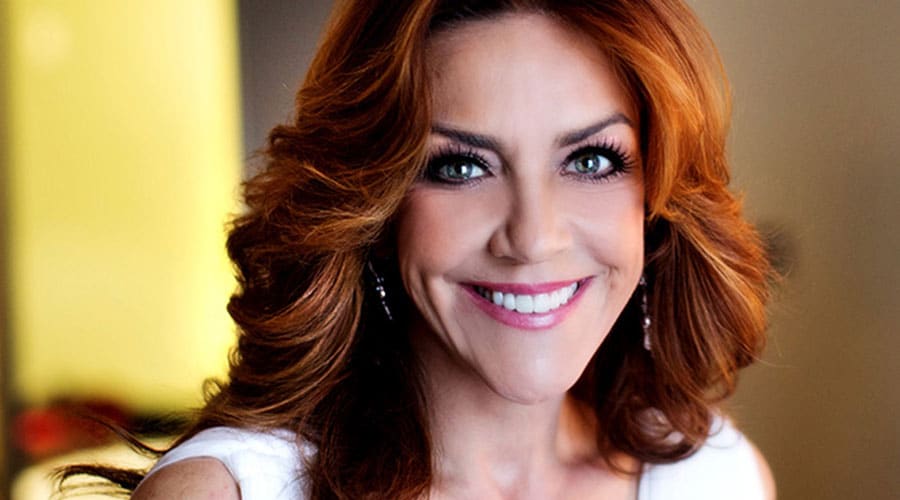 Whatever happened to that little orphan girl with an implausible ginger perm?  Showbiz CVs don’t come much more mainstream than Andrea McArdle’s, and this show promised to be a survey of the standard repertoire of the past five decades.  Plucked from the chorus during the Connecticut try-outs of ‘Annie’ in 1977, it fell to her to ‘create’ the title role.  And the rest, as they say, is history.  It’s definitely her history.

She has continued to play other great parts since, opening this chat-show cabaret with a blast of Judy-esque pizzazz with a brisk, ‘Zing Went The Strings Of My Heart’ (James F Hanley), reminding us of another of her triumphs, the 1978 TV movie, ‘Garland’.  She manages the chat well, too, doubtless having refined this part of her skills working for years in cabarets, casinos and cruises.  ‘Rainy Days And Mondays’ (Roger Nicholls and Paul Williams) came next, showing off even better the still youthful bloom of her voice, with that characteristic slightly nasal but wholly appealing twang in the upper and middle register.

And, at that point, the video relay crashed!  With a little gentle coaxing, however, it was nursed back into life.  Back to the anecdotes: how she nearly got to play in ‘Gypsy’ with Angela Lansbury, but her dad didn’t allow it!; how the first night of ‘Annie’ lasted four and a half hours, because it was interrupted by a hurricane!; and so on.  All delivered with cool, professional detachment.  So, we swished equally comfortably through a lesser-known corner of, ‘They’re Playing Our Song’ (Carole Bayer Sager/Marvin Hamlisch), and a blast of, ‘Being Alive’, from ‘Company’ (Sondheim): a toe dipped tantalisingly into something bracingly different, and then retracted.

Thence we proceeded to the inevitable, ‘Les Miserables’ (Schoenberg/Boublil), and a wallow with Fantine telling us that, ‘I Dreamed A Dream’.  Here, the evenness of her vocal style really began to show: the line remains fairly similar, rather like a spoken voice, with not so much light and shade, and the phrases are declaimed rather than actually sung all the way through.  Seth had to hurry along with some of the sustained notes, fairly galloping away with the accompaniment before McArdle’s breath ran out.  Nice of him.  If you can put up with these compromises, then it doesn’t really matter.  You’re hearing the great Andrea McArdle.

There is something comforting in this, for fans, doubtless; but there is also something of the Norma Desmonds about it – something is being brought back to life that, perhaps, should more safely be left to enjoy the graceful seclusion of a forgotten mansion out in the hills.  Eg., a medley from, ‘Rainbow’: Burton Lane and Yip Harburg’s, ‘Trolley Song’ from ‘Meet Me In St Louis’ (a show she has also done on the stage); the same lyricist working with Harold Arlen to create, ‘Over The Rainbow’; all of it sounding like a precocious orphan girl with a possibly disturbing talent for seducing middle-aged millionaire gentlemen.  You know, it’s like that line in ‘Hooray for Hollywood’: ‘… if she pleases the tired businessman’.  Well, if that’s what show-business is meant to be about, then it’s an increasingly fine line to tread.

Maybe she’s not aware of recent news stories, with another scandal being trotted out here, another embarrassing episode grovellingly apologised for there,… Maybe she doesn’t know all this is now happening?  There certainly aren’t many references to the here and now in her incessant repartee.

But we still get the stories of going on with fractured bones, black eyes, and all manner of mortification of the flesh: the way we were, perhaps, in them thar days.  But her story of dousing the orphans’ beds in ‘Annie’ with amyl nitrate is really not acceptable behaviour, is it?  ‘Maybe’ (Charles Strouse/Martin Chanin) from their biggest hit can still be sung with the punchy incisiveness she has always brought to the part, but one has to wonder how she has managed to keep her teeth all these years, chewing her way through that much sugar.

And cheese.  Plenty of cheese.  ‘New York, New York’ (Kander/Ebb) also dates from 1977 – her annus mirabilis – and she sang it as ‘Liza’ in the stage vehicle of the same name, segueing into ‘N.Y.C.’, right back where she started from in ‘Annie’.  Ever diminishing circles?  By this time, you are screaming to hear something a little bit more up-to-date, or just – well – different.

Nope.  That is not what you’re going to get.  It’s just more mainstream stuff, all from the same lost epoch.  ‘Mack and Mabel’ is a super show, and ‘Wherever He Ain’t’ (Jerry Herman) is one of its smashing songs, and it fits her voice today better than just about anything we’d heard in the show, but in this format, it just doesn’t work nearly as well as it does in the musical (which is the only other context I can recall hearing it in).  More Herman followed with, ‘Before The Parade Passes By’, sung with Little Orphan Annie’s cutesy-pie warble intact, after all these long, long years out there doing Broadway, tours, international tours, and even the West End.  Until finally, like the endlessly re-appearing Davy Jones in ‘Pirates of the Caribbean’, the greatest ‘Annie’ tub-thumper of all, ‘Tomorrow’, resurfaced to claim her soul all over again.

So, whatever happened to Little Orphan Annie?  Now we know.