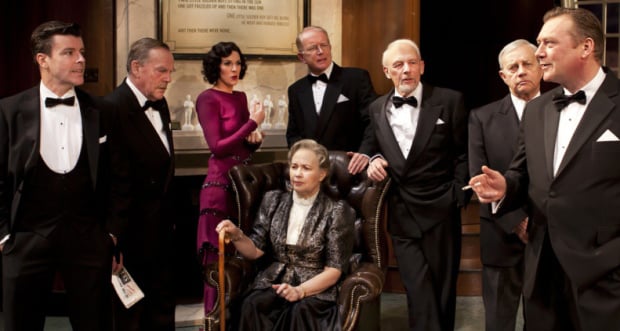 And Then There Were None
Churchill Theatre, Bromley on UK Tour
25 March 2015
4 Stars

You really have to admit that Agatha Christie was a woman who knew how to plot. She was the mistress of the carefully laid clue, the chance remark that ends up bursting with importance, the red herring, the redder red herring (where the red herring turns out to be a double bunger trick), the unexpected development, the sleight of hand, the sudden murderous twist. Her novels bristle with subterfuge and revelation, partly because Christie, having hooked the reader into her death filled, thrill laced world can rely upon the reader’s imagination to fill in the shadowy corners and propel the lingering joy of suspense.

In the theatre, however, it is much harder for Christie’s work to be as mysterious as it is on the page. The audience sees the action unfold and so there is a sharper emphasis on how the tale is told, in word and deed. Inevitably, the Christie plays are wordy affairs, set in bygone eras where language, taste, offence and the concept of decency were all very different from today. There might be the occasional clever lighting effect or set contraption to produce a particular effect or induce a gasp of fear, but, by and large, Christie’s plays only work because of two things: complete conviction by an accomplished cast and a text that gives full weight to Christie’s labyrinthine plotting.

Now touring the UK is Bill Kenwright’s Agatha Christie Theatre Company production of And Then There Were None, directed by Joe Harmston, who has helmed all of the productions of Christie’s plays the Company has toured over the last ten years. His experience shows clearly here. There is no lame attempt to update the play or tinker with it in ways counter to its ingenuity. No. Harmston approaches the staging with respect and considerable care.

Simon Scullion provides an excellent Art Deco set, complete with a circular window which is very impressive. The action is set in 1939 and the sense of that time is very clear in the costumes and furnishings. This is very much a period piece. It doesn’t have the lustre of Downton Abbey, but it is generally in that milieu. There are servants and lackeys and middle class people and the Establishment – Judges, Doctors, butlers and secretaries, all lured to an island for a House Party and jostling with each other for attention, respect and space.

Matthew Bugg’s sound design sets the scene very well. Before the curtain first opens, the sound of waves lapping against a shore reinforces the notion that the action is occurring on an island. You are clear from the out that the cast will be isolated by the waves. Later, Bugg provides excellent sound effects for a bruising storm and, for the climax, suitably doom laden notes echo around the stage, increasing the tension notch just so.

It was fascinating to hear the animated discussion in the auditorium, in the intervals or scene breaks, about the identity of the murderer(s) (not to give anything away, you know) and there was an audible gasp from many when the final revelation came. It is rare indeed – and an indication of the success of the piece – to witness this level of genuine engagement between stage and audience. It was not just the final reveal that produced shocks – several events along the way extracted notes of surprise or alarm, or that nervous laughter that comes when one is uneasy.

Because the action is confined to one set, a number of key events occur offstage. It would no doubt have been better if clever design could have opened up the stage to permit at least some of those events to be witnessed, even in part or in shadow. However, it is a testament to the sincerity of the performances that offstage events did not dampen the sense of drama or contribute to any serious notion of being cheated out of anything.

This being a whodunnit, beans must not be spilt. Suffice to say, ten strangers are marooned in a grand house on an island, cut off from the mainland by stormy seas, and they quickly find their lives in danger. Someone plans to kill them, one by one, but who, why and how? Even if you remember reading the book from which Christie herself adapted this play, possibly titled Ten Little Niggers or Ten Little Indians (depending on when you read it), there are still surprises and the odd textual change to keep your attention sharp and your little grey cells activated.

The chief flaw in Harmston’s production lies in his treatment of the necessary but fairly uninteresting, in terms of action, opening Act. Here Christie introduces the time, place and characters, so inevitably there is a lot of narrative set-up. It’s clunky and needs a better directorial solution than Harmston offers – static standing/sitting and talking may be interesting but it is not sufficiently captivating. However, the remarkable thing is that Christie’s alchemy wins through – as soon as the first corpse starts to cool, the almost feverish desire to work out the mystery starts to rise. From there on in, the time bomb fuse moves apace and inexorably.

The actors bear the brunt of the workload and here Harmston has, mostly, hit gold.

Ben Nealon, a veteran of eight Christie plays, is terrific as the good-looking but possibly slightly/completely unhinged Captain Lombard. This is a stock Christie character: the charming rake with a shady past, a good chat up line for the ladies and a revolver. Nealon gets the style precisely right, his accent and delivery spot on and his sense of total investment in the character and situation impeccably judged. His welcome brio is the pulse of the play.

Gravitas comes from a detached but dead-accurate performance from Paul Nicholas as Sir Lawrence Wargrave, a judge familiar with death sentences. Nicholas brings forensic aplomb to his delivery and captures exactly the Judge’s sense of entitlement and assumption that his great legal mind is up to the challenge of solving the mystery and fending off the paranoia that sets in deeply with his fellow victims in waiting. Measured and hawkish, Nicholas is first class.

This being Agatha Christie, there is a smorgasbord of eccentric characters to divert and hold attention. Susan Penhaligon is suitably dotty and purse-lipped as Emily Brent, a pretentious woman with an eye and ear for scandal and a tongue that is unafraid to lash. Stern, but also fragile and tragic, Penhaligon makes Brent much more than the archetype she could so easily be in lesser hands. Frazer Hines, as the newly hired butler, Rogers, does his best with a limited character. But he infuses the part with an ambivalence which works splendidly for the burgeoning mystery. His best scene comes when one of the murders reduces him to an automaton state, the life all but drained from him.

No murder mystery seems complete without Colonel Mustard, Professor Plum and Miss Scarlett and as the play proceeds one begins to wonder if those famous game board characters had their inspiration here – with General Mackenzie, Doctor Armstrong and Vera Claythorne. All are stock characters, spiced and peppered by Christie embellishments. As Mackenzie, Eric Carte is a triumph of gruff bluster, memories of his departed wife, and intermittent lucidity. Carte polishes the General’s part nicely and the moment when he is the first to articulate the grim fate which awaits them all is chilling.

Mark Curry gets the hardest part – the amiable Doctor with a shocking case of nerves and a dark history of alcoholism. He is the most obvious choice as murderer par excellence and Curry finds clever ways to underline that while, at the same time, leaving open the real possibility that he is just a frightened victim who happens to be a Doctor who happens to be best placed to dispense fatal treatments to those that fall. Fine work indeed.

Verity Rushmore is inconsistent as Vera, the femme fatale or frightened ingenue, depending on what you deduce is happening. She certainly gets the best deal from costume designer Roberto Surace – her backless dinner gown is a red herring all of its own. But in the sections where Vera has to express extreme emotion, Rushmore is wholly unconvincing. Apart from her final scene, this may have been a deliberate (and, if so, dashed clever) scheme to keep the audience guessing. She is at her best in her scenes with Nealon and Nicholas.

It’s difficult to imagine an Agatha Christie story without a policeman of some sort and this tale is no exception. Possibly. Colin Buchanan plays William Blore who says he is a policeman. A secretive, bold and upfront type, Buchanan’s Blore is completely believable and, like Hines and Penhaligon, walks the ambivalence tightrope well. There is a distinctive pungency to his delivery and he skilfully makes one of the oddest moments of staging work better than it should. (You would know when you see it.)

There is nothing ground-breaking here and nothing that suggests the re-imagination of classic play or thriller genre. Rather, this is a nicely judged, as-it-says-on-the-tin performance of a classy, complex, old-fashioned thriller. In this century, that is enough cause for celebration. A slice of what was in a world of whodunnit.