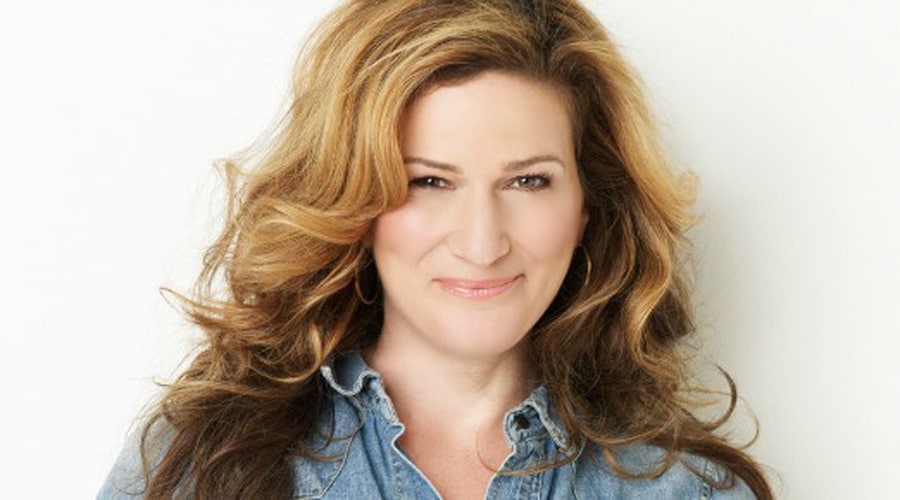 A bracing start was given to this episode of Seth Rudetsky’s now-familiar cabaret-chatshow format.  Ana Gasteyer sashayed into view with some rare and most, most welcome movement in this otherwise pretty static formula.  Immediately, she splashed out her cabaret creds with a punchy (and, oh, so timely) Irving Berlin hit, ‘I’ve Got My Love To Keep Me Warm’.  From this light-hearted start, things got even fizzier with the old Andrews Sisters’ number, ‘Proper Cup of Coffee’ (by, as I’m sure we all remember, Aaron Gershunoff and Emanuele Pellegrini).  And welding these substantial songs together were the sparks and crackles and flashes of the Gasteyer discourse, which – when mixed with the astringent vermouth of Mr Rudetsky’s quick-thinking banter –

Blessed with a speaking voice that bridges the brusque earthiness of a Bronx housewife all the way across to the whispering sophistication of Meryl Streep, Ana is a delicious raconteur, lavishing as much care over her anecdotes as she does her musical performances (with the distinct exception of her violin-playing, which we also got to hear).  Julian Fleisher, whose, ‘Nothing Rhymes With Christmas’, a pastiche 40s comedy song, was smoothly executed before the conversation got its instructions to wander off in the general direction of Barbra Streisand.

‘Don’t Rain On My Parade’ (Bob Merrill/Jule Styne) – the Act 1 Finale to end all Act 1 Finales – told us we needed to know about her massively blooming voice, but the ‘big’ stuff was dodged here, and instead, we switched into another jazz number, ‘Everbody’s Waiting For The Man With The Bag’ (a 1950 yuletide novelty song by Irving Tayler, Dudley Brooks and Hal Stanley).  Mood and tone kept changing so quickly that we became dizzy.  And then we were into a discussion of ‘Saturday Night Live’, into which La Gasteyer also graduated via her acting/voice-over/late-night comedy career.

This show, however, has also been a boom to all those who promote family values: barely an episode sneaks by anymore without various other inhabitants of guests’ homes popping up into the mis-en-scene, and in this instalment – devoted readers – we got Ulysses, her 12-year old, with whom she found another kind of voice to sing, ‘He’s Stuck In The Chimney Again’, for which Miss Gasteyer composed the lyrics (and very smartly turned they are).  Then we mooched into, ‘If You’re In The Market For A Miracle’, another Jewish riff on the season of other kinds of goodwill, done up here in sort of Tom Lehrer style.

Another of Gasteyer’s songs was rolled out next, another ‘secular, seasonal favourite’.  If we knew what was coming, then we were surprised by a silky Jackie Dankworth-style voice, as we got the title track from an album of our guest for this show: ‘Sugar and Booze’ (an album conveniently also on display throughout the entire programme, propped up on a music stand in the Gasteyer drawing room, between Ana and her piano.  Then, brava for Deanna Earl, winner of this week’s competition, who did a powerful last few bars of ‘Defying Gravity’: to which, Gasteyer – give her credits where they are so richly due! – said, ‘What does she get for that?’  Hmm.  ‘Reknown’ and tickets to a Broadway Show (the show’s sponsor is ‘Broadway World’, for those of you who have trouble seeing where the dots join up…).

Anyways.  Then she got to do a song from ‘Wicked’ all the way through: ‘The Wizard and I’.  This sounded like another finale.  (In fact, most of the songs in ‘Wicked’ do.)  A change of true style blew in with the send-off, ‘You’re A Mean One, Mr Grinch’ (Lindsey Stirling’s surprisingly durable ditty written for the original 1966 cartoon special, ‘How The Grinch Stole Christmas’.  And Ana did this with a pleasing mix of her cabaret drawl and Broadway showmanship.

Like many things packaged enticingly for Christmas, the show was perhaps a little more tinsel and sparkle than it could always back up with substance, but there is a market for such fripperies, and this edition certainly knew how to speak to it.  Still got it.