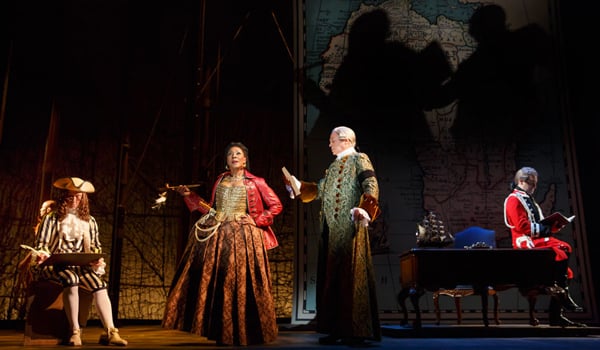 The ship is under attack. Explosions are going off everywhere and there is a palpable feeling of limbs being torn off as gunpowder-fuelled instruments of death find their mark. Suddenly, a large explosion, then another, then another, even bigger than the ones that came before it. A hapless crewman is blown skywards, high above the deck. It is not going to end well for him.

The lighting changes. Sounds effects signify the ship is sinking. The dead crewman hits the water and, together with the debris of the ship, sinks to the bottom of the waters off Sierra Leone. We are now underwater, watching the wretched result of the scuppered ship.

Suddenly, the maybe-hero, snarled in rigging rope, floats into view. Unconscious. Clearly drowning. No sign of life. He sinks lower. Maybe he is not the hero after all…Then, from off to the left, clearly having seen the hero fall to his doom, the old, faithful negro slave, Timothy, suddenly appears, swimming urgently to his former master. He cuts the rope, grabs the former hero and, now completely identified as the real hero, swims with his charge to the surface of the water.

The crowd goes wild. Act one ends – not a sung note to be heard.

This is Amazing Grace, a new musical by Christopher Smith (music, lyrics and book) and Arthur Giron (book), directed by Gabriel Barre and now having its premiere season at the Nederlander Theatre. It is no exaggeration to say that the well known hymn which carries the same name as the musical is, by far, the best piece of music in the score and this may account for the fact that the production is closing on October 25.

To describe the score as lacklustre is to engage in hyperbole. There are few arresting tunes, but a lot of “money shot” notes, high, held, pointless, which seem to entrance the audience. There is no real cohesion to the score, no sense of propulsion in either melody or harmony, and no real attempt to create a musical language which suits the narrative. Admittedly, a few numbers have interest and dynamics, but, on the whole, this is not a score anyone needs ever hear again – at least, in this form. 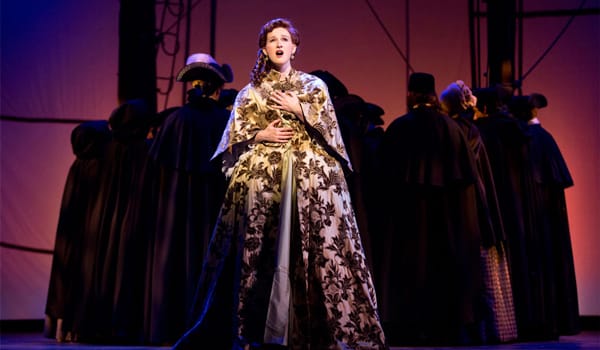 Dramatically, the piece is a complete mess. It never knows what exactly it is trying to be. It seeks to establish a redemptive “prodigal son” through-line, all about the conversion of one man from slaver empire heir to reformed zealous agitator for freedom for all slaves and an end to the barbaric practice. On itself, that is a story sufficient to found a musical.

But the creatives here add to that story others which are, at best, incidental. The tale of a gifted soprano and the evil military man who wants to own her and destroy the slavery abolitionists. The tale of the people of Sierra Leone and their grasping, murderous despot. The tale of a stupidly arrogant father finally awakening to the biblical tale of the prodigal son. While aspects of all of these stories are important to the central spine, too much time is devoted to them and too little time is spent fleshing out the life, motivations and reversals in the life of John Newton, the central character and accepted author of the tune, Amazing Grace.

But not enough time is spent showing why Newton senior is affronted by John’s behaviour. In order for John to undergo a proper transformation from sinner to Saint, to be worthy of hero status in the musical, the story needs to be darker, more honest. John needs to be seen demonstrating his failings, recognising them and then recovering. The production is almost entirely bereft of romance and certainly skirts around lust, when, truly, both should be integral. John’s failings come from his lusts – for power, wealth, independence, women; his redemption comes through love and understanding.

One of the results, intended or otherwise, of the approach taken to the story here is that the atrocities of slave trading and its reverberating consequences are glossed over. Audiences are encouraged to believe that the notion of slavery ended and that the hymn Amazing Grace is proof of that.

Of course, that is neither history or fact. Nor, indeed, is it what the programme records as the intentions of the creatives. Slavery is alive and well today; it may take a form different from chains around the necks and torsos of people abducted from their peaceful lives, but it nevertheless exists. Economic slavery, as well as physical slavery, is part of our world, and it is foolish for this musical to ignore that.

Had it embraced that reality, used that as a framework for a piece which was unsparing in its assessment of John Newton’s life, this may have been a significant musical. But by opting for blandness and superficiality, the creatives here have doomed this musical to the halls of mediocrity. 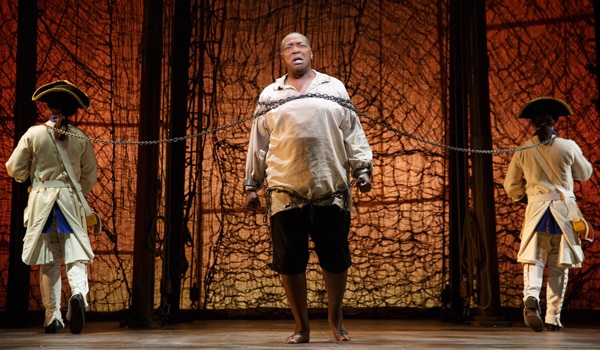 It’s not all a wasted effort. Toni-Leslie James provides beautiful, detailed, elaborately adorned, period costumes which are a real treat. Everything is beautifully tailored, sumptuous and elegant. Even the ludicrous character of the piratical despot, Princess Peyai (Harriet D. Foy, doing as best as anyone could) does not suffer in the costume department, and Erin Mackey’s radiant Mary is constantly immaculately attired. The long frock coats favoured by the Newtons are quite beautiful and, in the duller passages, there is endless fascination with buttons, waistcoats, and other accoutrements.

There is wonderfully effective use of scrims throughout and the lighting from Ken Billington and Paul Miller makes them spring to life in different and unexpected ways. The finale of Act One is very impressive indeed. The scenic design provided by Eugene Lee and Edward Pierce has a solid ship’s deck base which works well and other scenes are trucked in and out easily enough, without ever permitting a sense of the realness of the various spaces where actions occur. The depiction of Sierra Leone is poor but that is not, by any means, the only weakness in the design. One scene features a fabulous map of the then Africa, a map which provides detail and interest far superior to the critical scene which plays out in front of it.

While the tunes and harmonies for the new material might not be memorable, the orchestrations and playing is first rate. Kenny Seymour and Joseph Church, together with the 13 piece orchestra led by Aaron Jodoin, make great, evocative and stirring sounds. And when the title tune finally comes, the fusion of its simple majesty, the brilliant harmonisations of the cast and the clever arrangements, see the whole musical end on an intensely satisfying note.

Josh Young was indisposed at the performance I attended, and the role of John Newton was played by Vince Oddo who has a Disney prince style about him, and a pleasant voice he knows how to use well. (Production photos suggest that Young spends a deal of time shirtless; Oddo did not for reasons which cannot be associated with his physique) Oddo did his best, better with the blandest character of the piece than many would be.

Erin Mackey, perfectly judged and singing phenomenally well, similarly did her best with the vanilla cup-cake that is Mary Catlett. She is an extraordinary talent utterly wasted here. Chuck Cooper was in fine form as the stoically reliable, perfectly predictable slave, Thomas (real name Pakutch) and was especially good in the sequence where he told of the loss of his younger brother.

The villains, so to speak, of the piece, Captain Newton and Major Gray, are played as the writing suggests they should be by Tom Hewitt and Chris Hoch: without shade. Their parts would work better if Gray was a proper rival to John, and if Captain Newton was more tortured about his son. And it is a true pity those opportunities were missed.

The rest of the company do what they can given the raw material, but nothing can really make this ill-conceived narrative and these flimsy characters really work. The reliance upon silly tropes about the English, the French and the African people is counter-productive to creating a sense of reality and truth.

At one point, John hears the sweet singing of Yema, one of the Sierra Leone girls (nicely played by Rachel Ferrara). She seems to be singing tribal folk music, and her tunes contain snatches of Amazing Grace itself. Egregiously, no acknowledgment of that is ever made.

Towards the end of the play, the Prince wryly observes: “One thing about theatre. Audiences are fickle. They forget as soon as they leave.” Or something like that.

This production of Amazing Grace proves the Prince prescient.

Amazing Grace runs until 25 October at the Nederlander Theatre