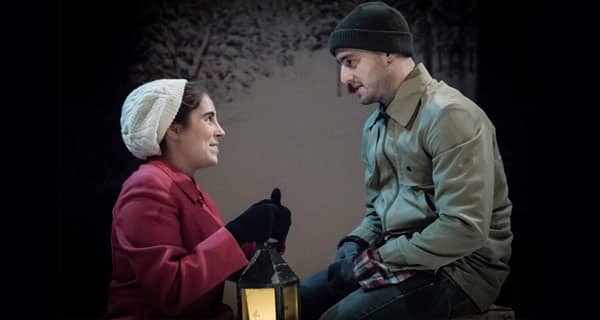 John Cariani’s play Almost, Maine has become one of the most frequently performed plays in the US. The show’s appealing charms have been a hit with both professional and amateur theatre companies including an off-Broadway run. After premiering in Portland, Maine, over 10 years ago, Cariani has updated the text for a new version that is having its international premiere at London’s Park Theatre.

Theatre company Go People has assembled a talented cast of six who portray 19 characters in the almost-real small town of Almost in the north of Maine – a surprisingly large state that is 90% forest and has only 40 people per square mile. The play is made up of nine loosely connected vignettes set at nine o’clock on the same Friday night in the deepest part of winter. A series of couples come together, break up, reunite and generally navigate the challenges of love and relationships.

The author’s premise is that the appearance of the northern lights in the Maine sky prompts normally grounded New England folk to behave out of character, excited in the same way as electrons excite atoms to produce the fabulous shifting light displays of the Aurora Borealis. The result is a play infused with magic realism where a kiss can heal and transform, love is tangible and people can literally fall for each other.

Despite there being magic in the air, there is a real sense of place in Simon Evans’ production, with the aroma of pine forests as soon as you enter the auditorium. Amy Jane Cook’s simple set captures the crisp winter night with pine trees and a snow-white floor, using packing crates to represent furniture and props.

There are no weak links in the strong ensemble of Hamish Clark, Lucy Eaton, Ian Keir Attard, Melanie Heslop, Patrick Walshe Mcbride and Susan Stanley. They portray the play’s magical and near-mystical elements as if they were the most natural thing in the world, preventing it from becoming too cute and over-sentimental. Cleverly and imaginatively crafted, Almost, Maine is a delightful show that will warm the coldest of hearts this winter.