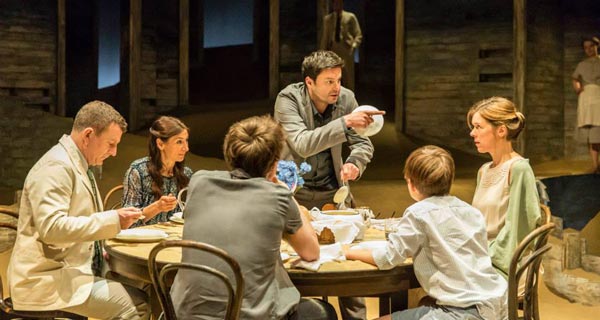 There is a symphony of sand. Sand is everywhere, pouring out of the door frames for a house. Things are buried in the sand, become unearthed and used during the course of the play. Other things are buried as part of the action. The family live in the house and don’t seem fazed by the sand. Except when they dig around in it, they seem to ignore it, although walking on it is sometimes difficult. At one point, a little lake bubbles up from underground, providing an odd oasis in the sandy vista.

The combination of sand, water, and romantic moon makes for a touching image towards the end of the play. It is beautifully lit by the talents of Charles Balfour and, for that one moment, it seems as though the shifting, gritty presence of the comatose sand has been worthwhile.

This is Natalie Abrahami’s production of Eugene O’Neill’s little known play, Ah, Wilderness!, now playing at the Young Vic. In the programme, designer Dick Bird is quoted as follows:

“I had been fascinated by pictures of a ghost town in Namibia called Kolmanskop. A once thriving diamond mining town, it had been abandoned since the 1950’s, and sand had invaded the derelict houses. Great dunes had formed against the faded plaster walls creating surreal desert landscapes interrupted by incongruous architraves and seemingly giant doorways.

We were drawn to the idea of invading O’Neill’s location with sand, the magic dust that, sprinkled in our eyes, makes us dream of creating an uncertain, shifting, interior landscape that showed the passage of memory and time.”

Whenever sand has been sprinkled in my eyes, dreaming has not been my first response. There is nothing magical in the feeling of gritty abrasion under the eyelids. Indeed, scarcely is there a more irritating thing than sand in places where it ought not be. And so it is here on Dick’s preposterous set: Irritating.

The Young Vic has been awash recently with productions of classics which seek to “de-construct” them, if not in the German way, then in a way which represents the pinnacle of Anglo-Deutsche assimilation. Some of these have been impressively memorable, cases where the design is an integral part of the overall deconstruction approach, where the design helps illuminate, frame and reveal the director’s intention and the response of the text to that intention.

But Ah, Wilderness! is not such a case. O’Neill’s play was billed as a comedy when first staged and it is often thought of as his “only comedy”. An apocalyptic vision of decay, sand invading everywhere, does not immediately summon up the urge to exercise one’s funny bone. It is difficult to comprehend why Dick and Abrahami were “drawn” to the notion of giving O’Neill’s setting a Kolmanskop feel. Trite notions of sand in the hourglass denoting the passage of time, and, therefore, memories, are insufficient to justify the design, especially given the sense emanating from the sand strewn fragment of a house: doom, despair, melancholy. These are not the key elements of a comedic setting.

But, that’s not all. Abrahami creates and imposes upon the text a new character. This unnamed man is clearly meant to be O’Neill reflecting upon his own life as it plays out in the play. This character also plays a couple of minor roles, but his main function is to read snatches of stage directions, to underline the fact that this play is based upon O’Neill’s memories. This is a totally unnecessary and endlessly distracting device. It adds nothing to the purpose or the playing of the text, but it takes away one’s ability to be caught up in the gentle comedic inter-play within the family. Constantly, the presence of this interposed interloper stops one from engaging completely with the Miller family; and wait as you might for a pay-off, a theatrical reason for the device, none comes.

Like the ludicrous sand, the omnipresent author character is a directorial misjudgment of epic proportions.

Given these weighty handcuffs, the cast struggle amiably to make the play work. It’s a gentle, delicate and quite lyrical play, essentially a coming-of-age play but with flutters in the direction O’Neill would later stride with A Long Day’s Journey Into Night and grace notes that remind one, forcibly, of his earlier Pulitzer Winner: Beyond The Horizon.

Newspaper man Nat Miller is happily married to Essie. They have three sons, Arthur, Richard and Tommy. Richard is sweet on Muriel but her father warns Nat to stop their relationship, giving him a letter to Richard which Muriel has written in which she denounces his advances. Richard takes it all badly, rows with his parents and goes on the 1933 equivalent of a bender, ending up drunk and with a call girl. His parents fret.

The family has an affable alcoholic living with them, Sid, who has a complicated past with spinster Lily. After much fretting and some hearty tut-tutting from Essie and Nat, Sid wakes up to himself and Richard realises he is awake. A moonlight encounter with Mutiel helps with the latter, a sand bath with the former. And along the way there is much quoting of poets, and Tommy has enormous fun with firecrackers – because the events take place mostly on July 4. It turns out that it is not just America celebrating its independence that particular year.

Regrettably, there is not sufficient lightness in the performances for the piece to take flight. Everything seems ponderous and self-important, partly, undoubtedly, because of the sand. There is an all-pervading sense of decaying worthiness about the style of performance; where there should be geniality and a spry lightness of touch, there is the smell of badly done Chekov.

Dominic Rowan is the central, but not sole, exception. His rascally Sid is full blooded and he makes the most of what the part offers. He even manages to look convincing while taking a sand bath, and his bad behaviour over soup plates is memorable indeed. He brings every ounce of laconic charm to the role and provides a nice counter balance to the more straight-laced sense of manhood against which young Richard is rebelling.

George Mackay is impressive as Richard, vibrant, compelling and suitably obsessive. It is as good a portrait of transitional angst as might be hoped for, although slightly too modern to fit neatly with either the writing or the style of the other actors. The best scene of the play, the moonlight escapade with Muriel, is as effective as it is because of the relentless restlessness Mackay brings to the entire proceedings. He gets firm support from Georgia Bourke’s rebellious Muriel and their moment by the water almost makes the annoyance of the sand dunes worthwhile.

Martin Marquez and Janie Dee are absolutely in sync as the Miller parents. There is a brittle abstractedness about the playing which seems intended to create a sense of the memory of these characters, rather than to be the characters themselves. If that was the aim, both score bulls eyes, and perhaps in this production, it was the wisest choice. But more warmth and less of a mannered style would have allowed their performances to blossom in ways one suspects the author would have approved. They each establish the sense of their marriage, their real commitment and affection and their concern for their children. Dee is the best of the two, finding the music in the words whenever she can. Marquez and Rowan establish a solid believable friendship and especially good was Marquez’ rapport with Mackay. The birds-and-bees talk is delightful.

The other performances range from competent to absurdly irritating. Abrahami does not keep the pulse of the piece beating hard and occasionally, often even, the whimsical joy in the writing is subsumed by the sonority bouncing off the sand. The endless sand.

This is a production of an interesting mid-career play from O’Neill. It is not, however, an interesting production. Absent the sand, reconstructed as the author intended, Ah, Wilderness! might actually be the comic gem it promises to be, given it was O’Neill’s only comedy. It’s a pity Abrahami and Dick let their deconstruction agenda get in the way of O’Neill’s gentle, humouorus and insightful vision.