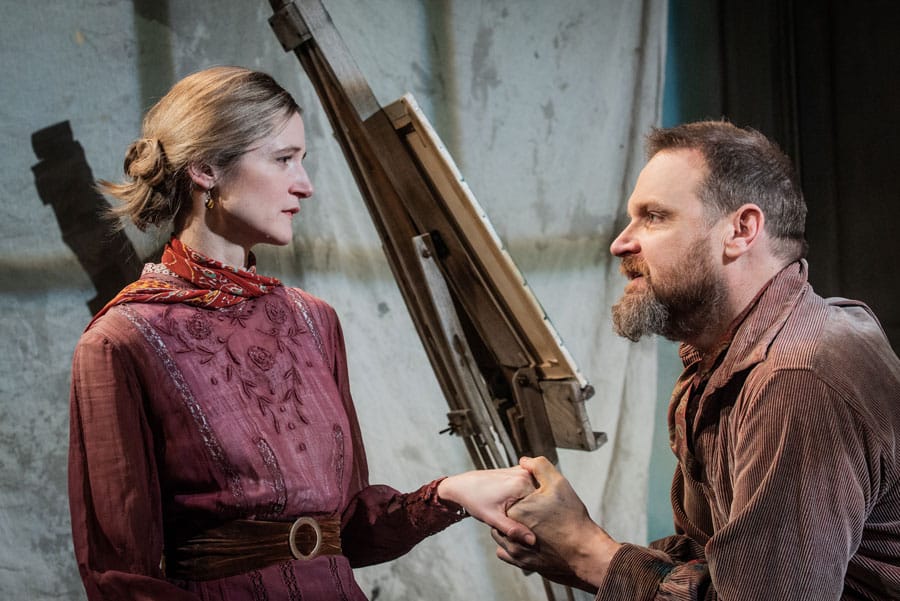 What do you expect when a feminist play has a title character named after a leaky kitchen implement?  Do you feel inspired with confidence?

Transferring to a small London theatre for a short run is the Ustinov Studio, Bath’s production of this never-before-performed early work by the not-often-performed turn-of-the-20th-century playwright, Harvey Granville Barker.  With a subtitle of ‘An attempt at life’, and as a clearly rough and ready work of apprenticeship, this might easily be called ‘An attempt at a play’.  Because that is what it is.  Characters come on stage, they make speeches at each other – which almost never sound like what they really want to say, certainly not what the audience wants them to say.  At one point towards the end of the first act, the title character has a snide little go at one of the two men who revolve around her (while she herself revolves around a fourth, whom we never get to meet), ‘Are you married?’  The suitor clever rebuffs this with the witty riposte (he is annoyed at her carrying on an adulterous relationship with an uber-macho painter), ‘Are you?’  The exchange is over in an instant, and lasts just long enough to pin-point what we are missing elsewhere in the script: any sense of dialogue emerging naturally out of characters in a given situation. 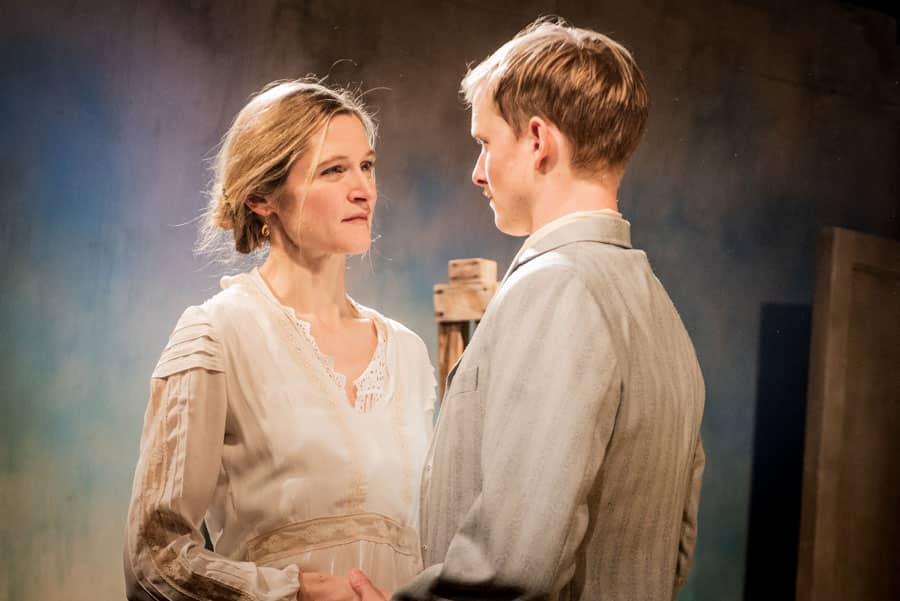 Elsewhere, for pages and pages and pages of this guff, there is nothing but vacuous posturing: a weakness in the play which is exacerbated by director Trevor Nunn’s obediently naturalistic staging, a move that just throws into garish relief the immaturity of the work, and its essential lifelessness.  By the time we get to the interval some patrons are ready to leave, and do, which is a pity, because it is in the second half of the production, in its closing scene, that – suddenly, unexpectedly, and wonderfully – Granville Barker hits his stride and creates genuinely interesting theatre, of the kind that was to make his later plays, like ‘The Voysey Inheritance’, so rewarding.  However, it is just one scene that offers us this glimpse of what was to come (he wrote it at 23, set it aside, and never attempted to produce it… wisely). 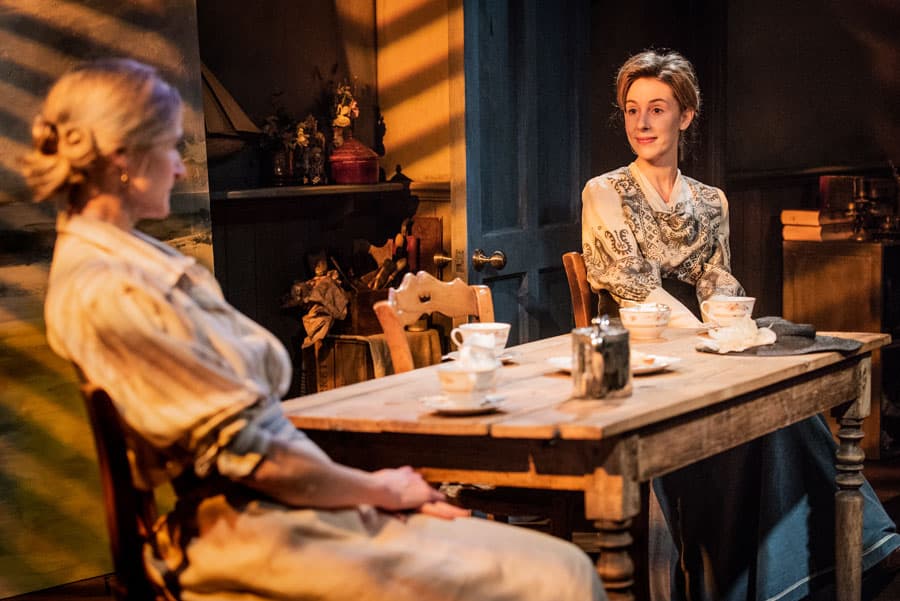 For the rest, we get the painful spectacle of having to watch a great deal of talent being thrown after too little result.  The playwright Richard Nelson was tasked with ‘revising’ the script for production, and god only knows what he thought of the task: it cannot have brought him much pleasure.  It certainly brings us very little.  Perhaps the biggest problem he is set is that the endlessly talked-about husband of the heroine never actually appears on stage.  The audience continually expect him to show up to either confirm or complicate or refute (anything is possible) what is being said about him, but that moment never arrives: it is one of the script’s many disappointments.  Naomi Frederick, in the title role, seems more embarrassed than anything else in having the empty lines she is given to spout, and she rarely begins to convince as the painter she is meant to be.  As her radical ‘Seitensprung’, the Dane, Otto Kjoge (let us remember that Denmark is on The Road To Ibsenland), Matthew Flynn has the nearly impossible task of making plausible psychological changes that are stymied by both torpidly static discourse on the one hand, and rash lack of preparation on the other.  He does what he can, and we feel for him – for all the wrong reasons.  Playing against him, as it were, Harry Lister-Smith as Alexander Flint, the naif smitten with goddess-worship of our Aggie (yes, that is how she is referred to in the play), strikes few sparks with his damp lines (except for one!).  But Sally Scott gets the best deal of having somewhere to go with her part, and something approaching a road-map indicating how to get there, in the much, much more interestingly, and economically conceived role of Emmeline Marjoribanks (the association of her forename with the head of the contemporaneous and illustrious Pankhurst family is, we can be fairly sure, not wholly accidental).  Her farewell scene with Agnes is the lovely high-point of the play, which points towards the author’s true merits. 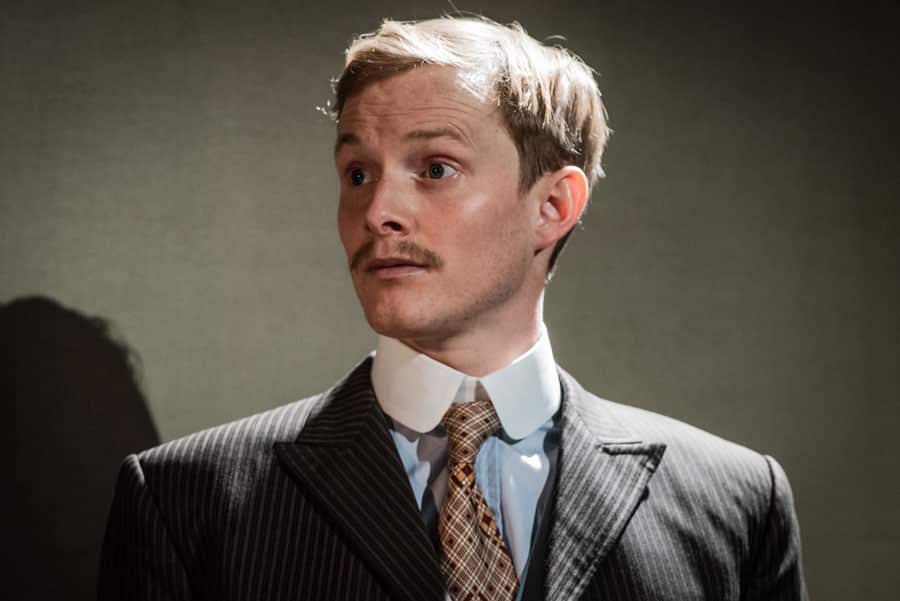 But so often these are invisible to us.  In two servant-roles of Martha (in England) and Suzon (an l’etranger – this tale of love among the artists is nothing if not thoroughly upper-middle-class), Cindy-Jane Armbruster spends most of her time carting meals on and off the stage – a laboured device that robs her final canny transformation of much of its impact.  In the company of these hard-working professionals, we stagger through the ultimately rather plot-less story, knowing that they are getting properly paid and being seen.  Apart from that, there are few consolations.  A lot of heavyweight creatives have contributed to the production, but with the director’s insistence on the literal approach, there doesn’t seem to have been much that they could do.  Richard Jones’ design is credible, but cannot find ‘point’ in a script so obviously lacking in one.  The same has to be said for Paul Pyant’s lighting, which is decorative and can be no more.  Fergus O’Hare’s sound design does what it can to further prettify the narrative, with lots of chamber music, which ultimately has the effect of making the whole pudding sag even more.  The overall impression made here is of a once great director who – on this occasion – has revealed waning powers of invention.  People will go because they are fans of the once revolutionary and startling director, but it is for addicts and completists only.