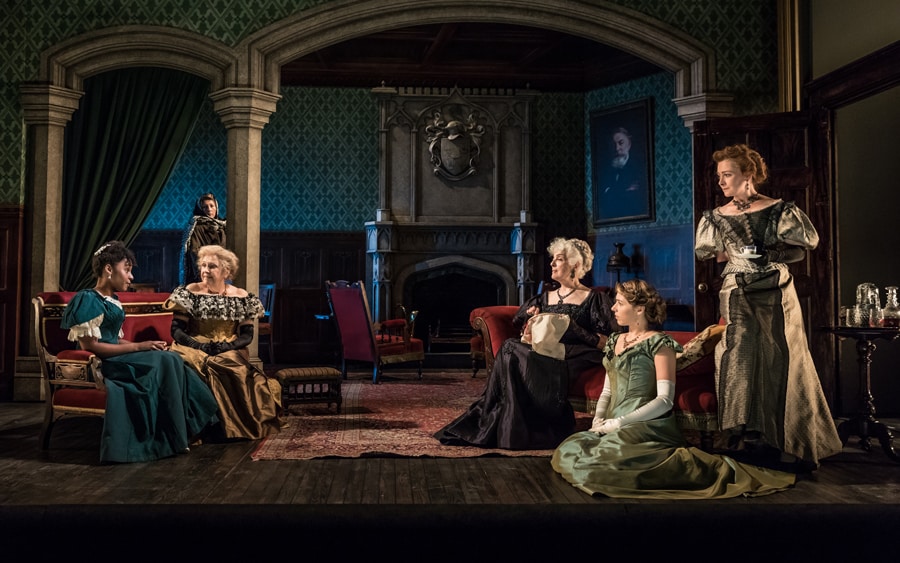 Under apocalyptic sepia skies hurricane Ophelia whistled in my ears and knotted my hair, rustled my coat and pushed me down the Strand at a pace. I took shelter at the Vaudeville theatre for the commencement of the Oscar Wilde season, opening with ‘A Woman of No Importance.’ Despite the many glances at my watch as the play reached its 150th minute, I was grateful to escape Ophelia’s temper. 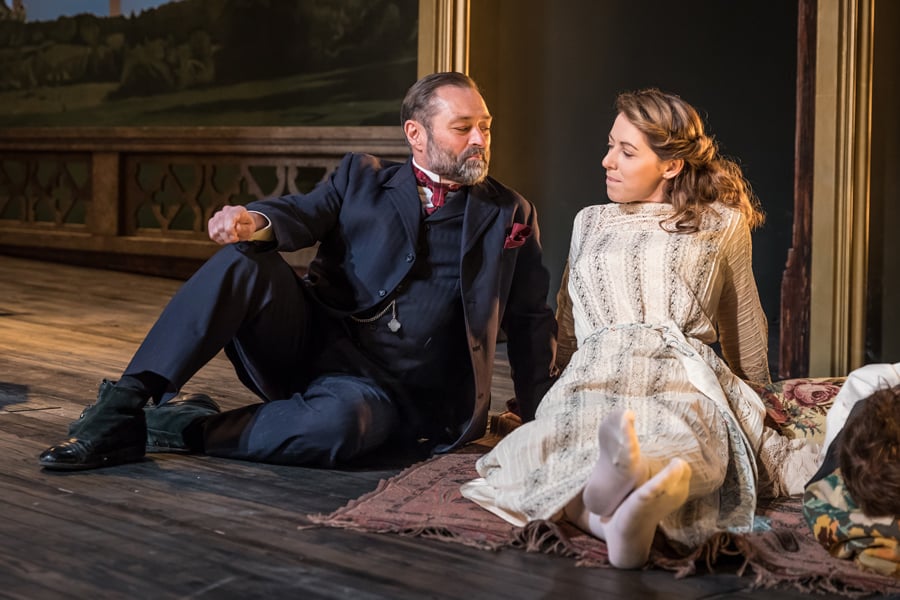 Wilde’s 1893 comedy tells the story of boyish Gerald Arbuthnot (Harry Lister Smith) who is offered a secretarial role by Lord Illingworth (Dominic Rowan). Upon hearing the news, Gerald’s mother (Eve Best) is devastated to learn that Lord Illingworth is the same George Harford who she once loved, but who refused to marry her despite knowing she was with child, and despite the social battery she would be faced with bearing a child outside of wedlock. Mrs Arbuthnot, ruined by illegitimacy and forced to live life as a sinner, is desperate for Gerald to refuse the position with, unbeknownst to him, his father. 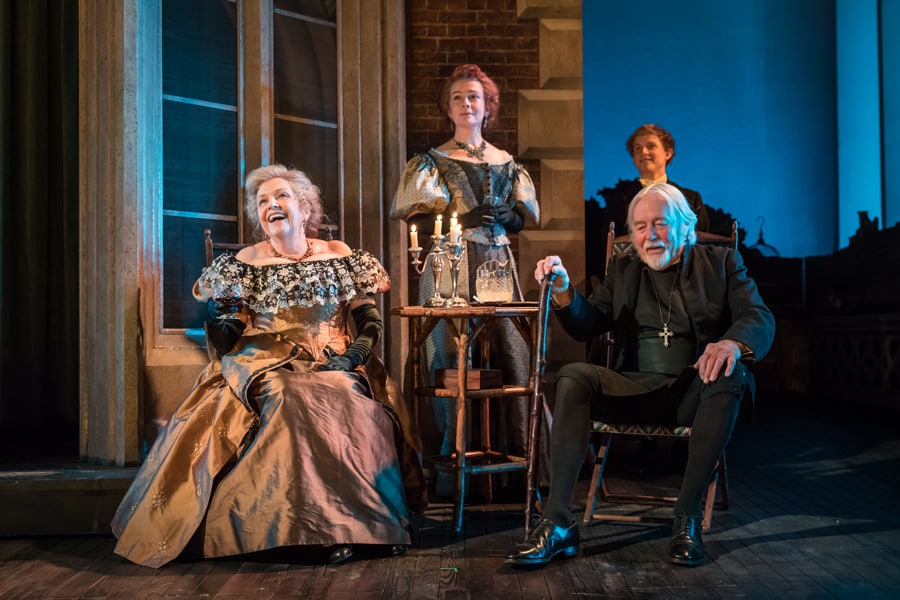 Eve Best is remarkable as Mrs Arbuthnot, conveying a woman not self-pitying because of her past, but strong-willed and thankful for her son, no matter the burden she has encountered as a lone parent. Best delivers Arbuthnot’s ‘Mother’s Love’ monologue with bruising affection, and her final altercation with Lord Illingworth (played by Rowan with haughty male superiority) is both directed and performed with satisfying catharsis. Throughout, the upper-class women hosted at Hunstanton Chase country house offer a sprinkling of laughter with their gossips and discussions about the behaviour of the opposing sexes. Emma Fielding’s Mrs Allonby has a ‘wickedness’ about her, only willing to tie her boots and kick the wall of obstacles faced by her sex. Lady Caroline Pontefract (Eleanor Bron) is amusingly possessive as she mothers and fusses after her husband but, for me, it is Anne Reid’s nosey and quick-witted Lady Hunstanton who holds the power in this performance. 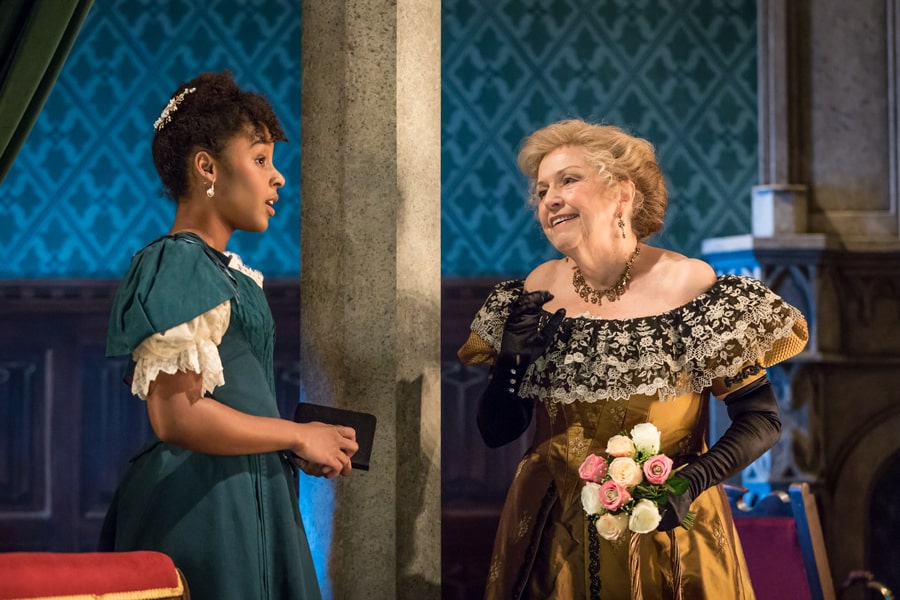 Assistant director Sara Joyce speaks of Wilde’s writing process, and how he edited some of the ‘pertinent moments and saucier language in earlier editions’ of the play due to concerns, particularly, for his reputation. However, some of Wilde’s original script has now been reinstated and, as a whole, there is no denying that the dialogue can still speak to the 21st century audience. Miss Hester Worsley says: ‘Don’t have one law for men and another for women. You are unjust to women in England. And till you count what is a shame in a woman to be infamy in a man, you will always be unjust.’

Wilde said: ‘theatrical audiences are far more impressed by what they look at than by what they listen to’, and Jonathan Fensom’s set design certainly satisfies the Victorian atmosphere with a patterned drawing room furnished with red chaise-lounges and handsome rugs, and a picturesque bricked terrace which is lit with glowing lanterns. During scene changes, as we are moved like pieces in a game of Cluedo from terrace to drawing room to the Arbuthnot home, a self-accompanied quintet (made up of Lady Statfield, Lady Hunstanton and three of the household employees) appear in front of the stage curtain to sing Victorian ditties. The first, ‘A Boy’s Best Friend is his Mother’ was met by a ramble of amusement but, by the third time this occurred, for me, the humour had dwindled. 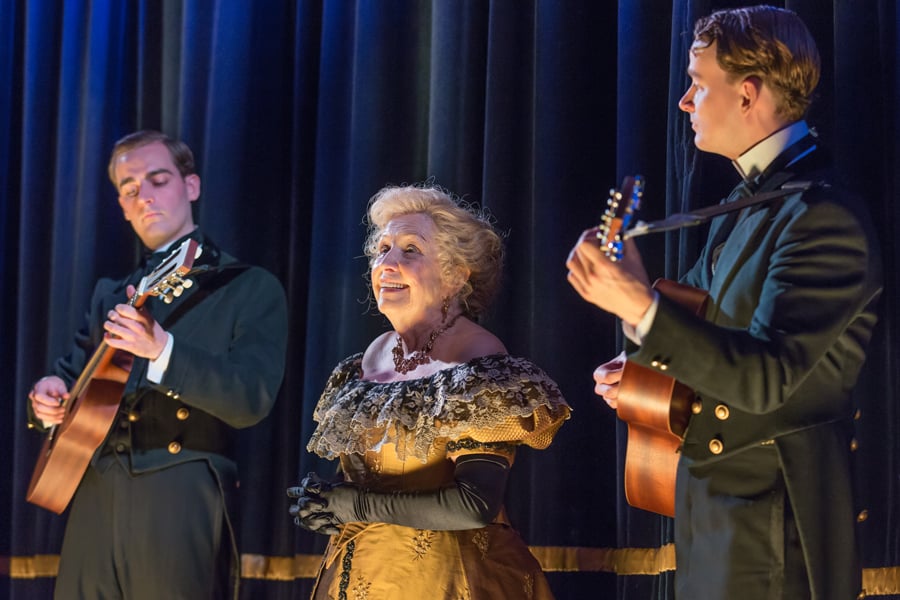 Artistic director Dominic Dromgoole’s Classic Spring Theatre Company embark on their season drawing acclaim to works of proscenium playwrights, performing plays on the stages the writers would have imagined as the ink on their manuscripts was still wet. ‘A Woman of No Importance’ fits into the Vaudeville theatre like a glove, and the vision of Oscar Wilde sitting in the same theatre auditorium in which he had watched performances of Hedda Gabler (a play which gave Eve Best an Olivier award) is rather romantic. Oscar Wilde had a unique sense of wit and his plays are heavily seasoned with sharp remarks. Whilst Wilde’s intelligent witticisms are successfully displayed here, and despite there being some good performances, ‘A Woman of No Importance’ feels far too long, and a sense of momentum and buzz is missing.

‘A Woman of No Importance’ runs at the Vaudeville theatre until 30th December 2017.

BOOK NOW FOR A WOMAN OF NO IMPORTANCE AT VAUDEVILLE THEATRE