Julian Eaves reviews Oscar Wilde’s A Woman Of No Importance at the Richmond Theatre as part of its UK Tour. 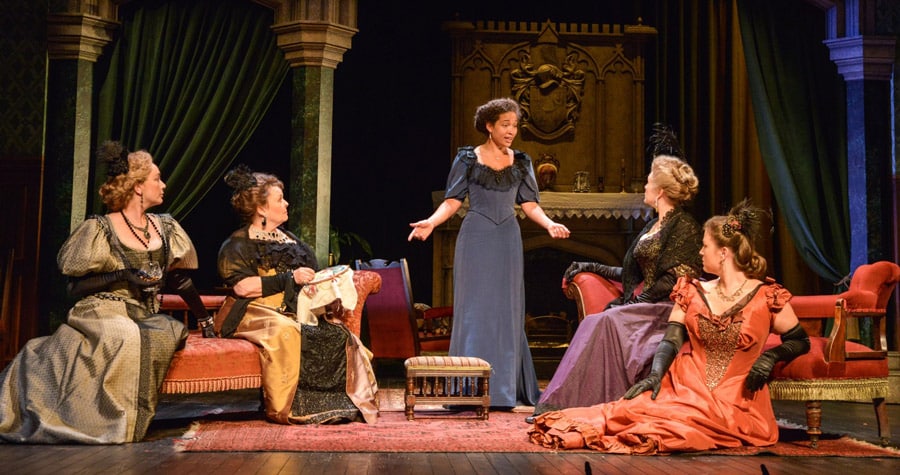 Last year, there was a blitz of Oscar Wilde plays at the Vaudeville Theatre in the West End; it included some magnificent hits – like Jonathan Church’s perfect ‘An Ideal Husband’ – and some less successful offerings.  This is one of the less successful scripts – a problematic mix of salon aphorisms and clunking melodrama: director Dominic Dromgoole was deemed to have cast it wisely and balanced the two competing dramatic modes as well as anyone could when it played in the West End.  However, in preparing the touring production – entirely recast – something seems to have gone awry. 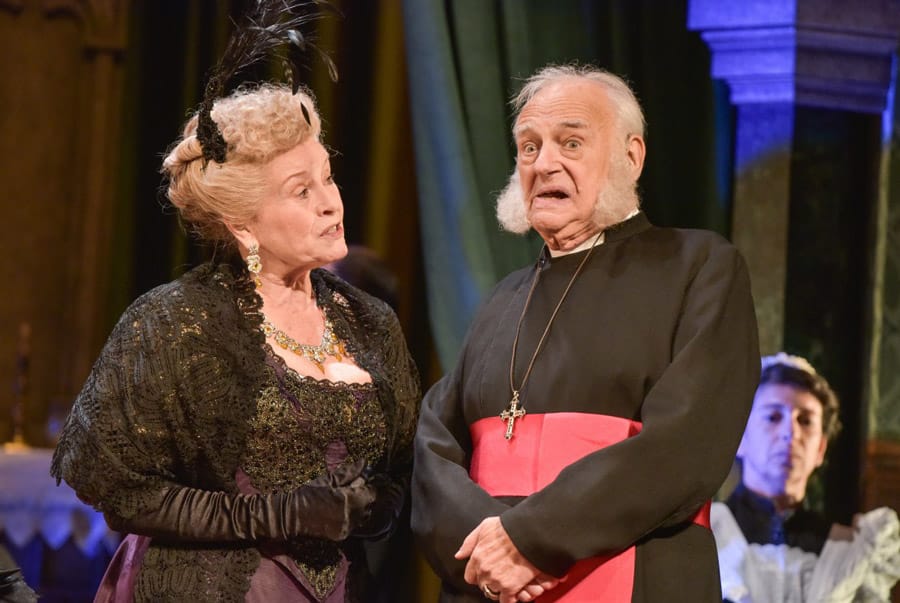 What we now get, starting at Richmond, is a gammon-flavoured slab of English Heritage theatre that succeeds neither as a light-hearted, bitchy comedy nor as impassioned Ibsen-esque disquisition upon the inequities of late 19th-century gender roles and social morality.  If you don’t speak English, though, you can look at a lot of very, very lovely costumes by Jonathan Fensom – and they are simply ravishing – and be very content with that.  In fact, there might be some considerable financial mileage to be gained in getting audience members to arrive early (this production is almost overwhelmingly going to appeal to patrons of more leisured and pensionable ages), to be photographed in this splendid attire, in the pretty box sets created to show them off.  Indeed, that might almost be a more worthwhile under-taking than having them sit for a couple of hours in the auditorium through the bumpily uneven experience of the play itself, which seems to be trying to replicate the shallow, narcotic nostalgia of ‘Downton Abbey’.  Of course, an awful lot of British people are afflicted by that condition, and perhaps the producers of this tour are hoping enough of them will be happy to book into theatres up and down the land for a ‘live’ experience of it.  Apart from the odd jibe at the uselessness of Parliament, there’s not much else for people today the latch onto in this play. 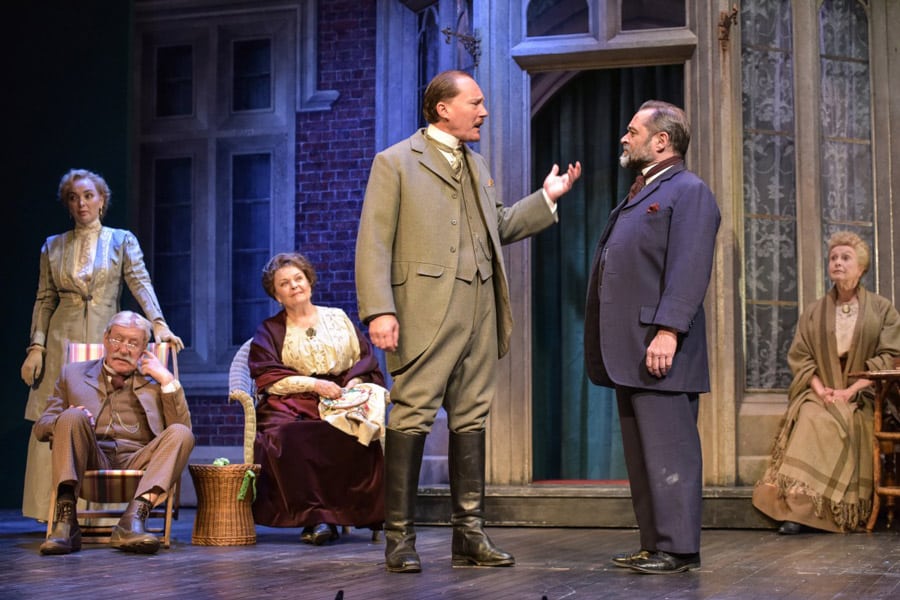 There are four acts.  The first, on the neo-gothic terrace of Hunstanton Chase, is a stiff affair, with much out-front, declamatory delivery of what should be carelessly airy repartee; Dromgoole directs his actors to promote surface bravura at the expense of suggesting any depth or complexity underneath, which is – in fact – omnipresent at such social gatherings.  Isla Blair (Lady Caroline Pontefract) and Liza Goddard (Lady Hunstanton) are cases in point here: they are popular names, given top-billing, but they only win smiles and chuckles rather than the belly laughs needed to engage the lower chakras and get us to care about them.  In fact, in the whole event, only one actor – the other headliner, Roy Hudd (who, at 83, is still in pretty good form, if a little under-powered at times) – as the dipsomaniac bore, Reverend Daubney, achieves that connection with the earthier, baser side of comedy that is absolutely vital if we, the audience, are going to give two hoots about what happens. 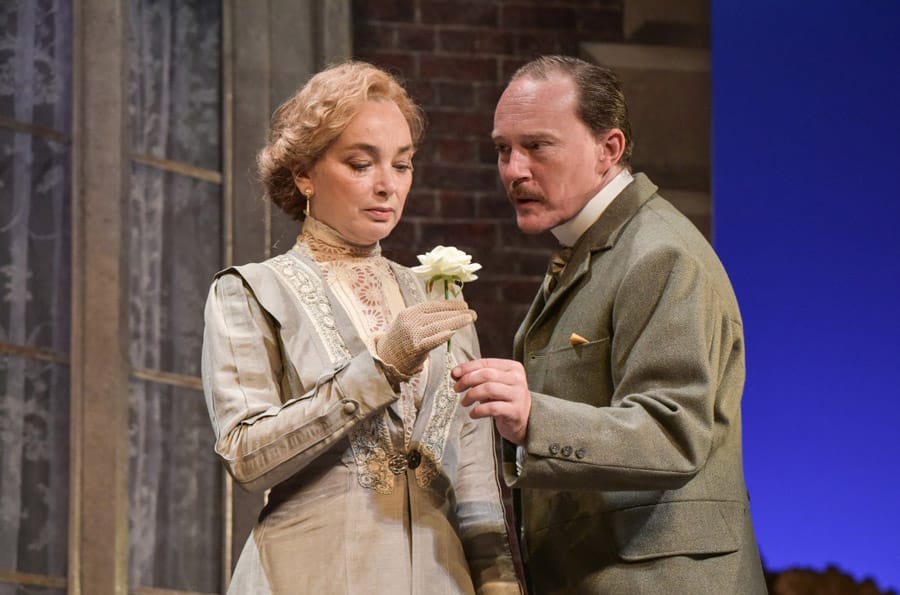 Sadly, the other, doubtless capable, members of the cast all go for rattlingly two-dimensional projections of pieces in a not very interesting jigsaw puzzle.  Emma Amos is attractive, but nothing more, as Mrs Allonby, and Meg Coombs seems just out of place as Lady Stutfield.  Georgia Landers puts effort into her American accent as Miss Worsley, but never seems to get to grips with who she is.  Tim Gibson is blandly innocuous as Gerald Arbuthnot.  Things occasionally get better with the dark shadows cast by Mark Meadows as Lord Illingworth, but he is stymied by encountering nothing but wafer-thin characterisations around him.  With one exception.  The Hamlet-like, black velvet-clad Mrs Arbuthnot of Katy Stephens has a gloomy gravitas that is even more awkward here than the Prince of Denmark’s is at Elsinor.  But, melding her grave, martyred role – virtually mirthless – with the frivolity of everyone else around her in this cohort, proves an insurmountable task for Dromgoole. 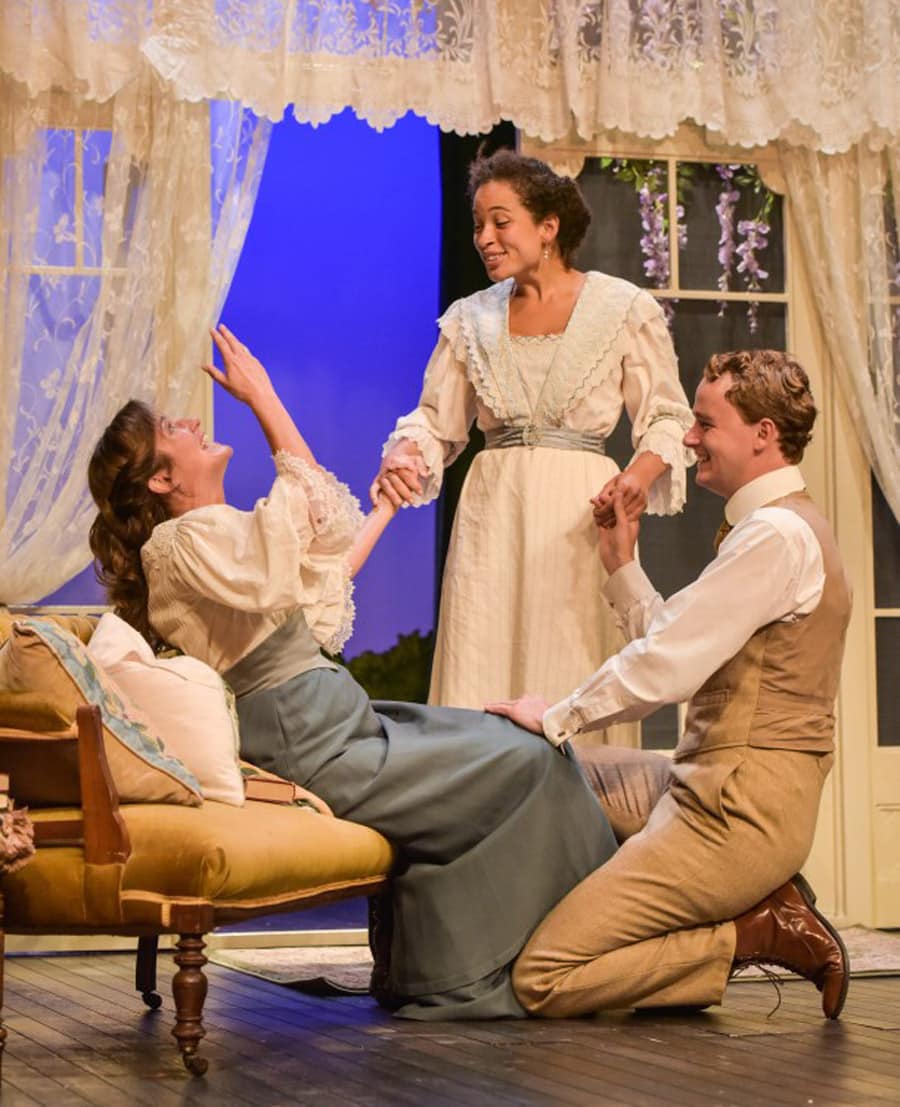 The talk – there is no real action to speak of – perambulates via a postprandial drawing room at the castle, then back onto the terrace by star- and candlelight, before concluding the next day in the more modest sitting room of Mrs A’s house at Wrockley.  Throughout, only Stephens manages to convince: her problems are caused mainly by the script which waits until the very last moment before revealing the mettle that has kept her going for two decades.  That’s a long wait for any actress to endure, and this one does a good job of patiently awaiting it.  It remains to be seen how well audiences also stand the course.