Midlands reviewer Gary Stringer is impressed by the touring production of A Monster Calls. 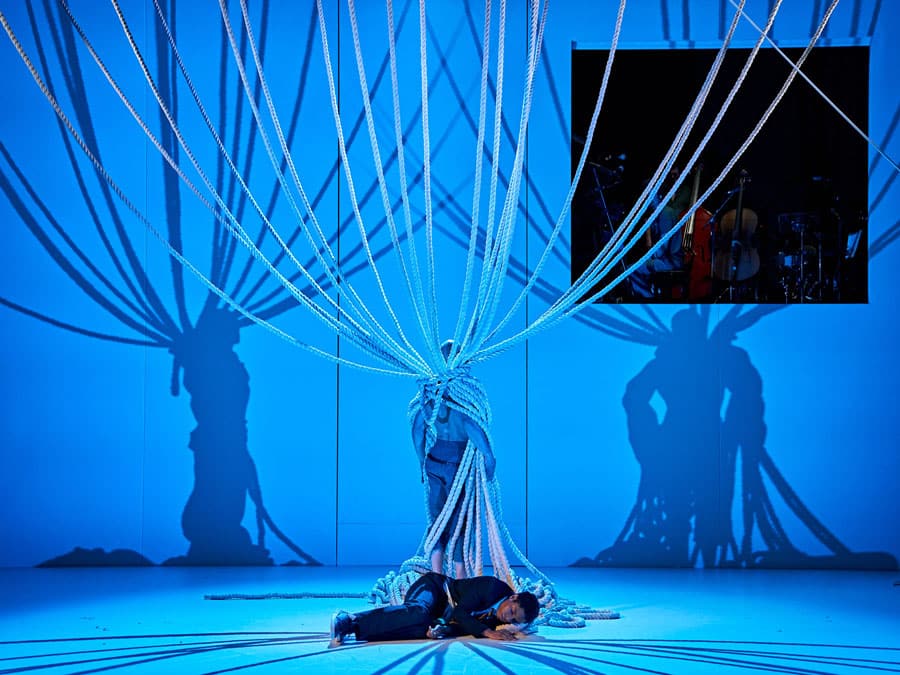 Patrick Ness’s acclaimed young adult novel, A Monster Calls, has some pedigree, having already been adapted into a hit film starring Hollywood heavyweights Sigourney Weaver and Liam Neeson in 2016, and a successful stage adaptation at London’s Old Vic in 2018. The baton is now passed to a new cast for a nationwide tour, running at Nottingham until 22 February, under the direction of Sally Cookson, who has form with literary adaptations, having previously helmed productions of Jane Eyre and Peter Pan.

We open on a stark set, from designer Michael Vale, a blank white wall and two rows of chairs facing each other. To each side, ropes hang ominously hinting at the entanglements to come, and suggesting that everything is not as simple as first appears. This blank canvas is the perfect foil for the drama that is to unfold, a clean white page on which to project our hopes and fears, a liminal space to explore the transitions between the dreams of childhood and the stark realities and responsibilities of adult life. Impressive and immersive projections and lighting from Dick Straker and Aideen Malone respectively transform this space as the cast lead us through the mundanities of day-to-day life, fictional flights of fancy and the confrontation with our deepest nightmares of loss and regret. 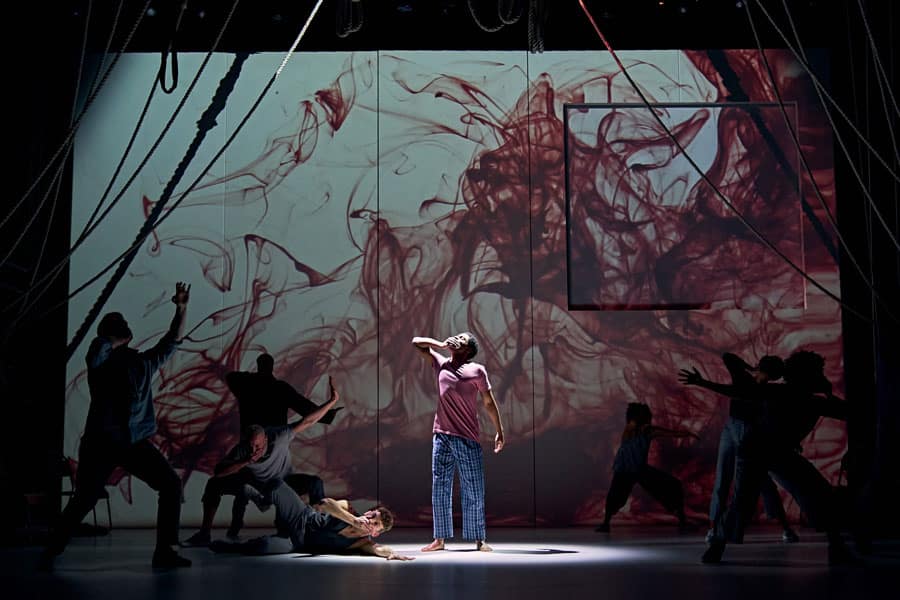 More than just a play, this is performance art, high-wire circus, dexterously choreographed ballet and sublimely scored concert. In fact, the music by Benji Bower is a character in itself, performed by musicians Seamus Carey and Luke Potter (I would hope they continue to work together after this tour) who oversee proceedings after being revealed top right of the set. Throbbing electronica and haunting synthesised vocals combine with piano and cello to evocative effect, underscoring and heightening the emotions being played out on stage.

The cast are all excellent, working together in tightly composed formation to bring to life characters you can identify and sympathise with. No rose-tinted glasses – this is humanity in all its complexities, resilient and fragile, loveable and unlikeable, fearful and fearless. As Conor, Ammar Duffus excels showcasing a boy forced to grow up too fast by events beyond his control and understanding. We share his grief as he comes to realise that he is not only losing his cherished mother, but also his idealised childhood along with the future he had imagined for himself. We journey with him as the walls he’s built up to protect his fantasy are brought tumbling down. Maria Omakinwa is also outstanding as his mum, bravely hiding her own pain and fears to protect her child as she battles against the inevitable and the unknown. Although surrounded by people, she is horrifyingly alone.

As for the titular monster, this is stunningly and inventively realised as the cast manipulate and contort the ropes to create the yew tree, as a symbol of life itself. Striding across the ages, rooted in the past and branching out into an unknown future in which we will play no part, this is a powerful reminder about our uneasy relationship with the natural world.  Our human lives are just blinks as he stares out across history. Brought to life with impressive physicality by Keith Gilmore, this monster is both friend and fiend, offering no easy answers, he terrifies as much as he comforts, cajoling and threatening Conor, and ourselves to accept our own inevitable fates.

This is a story highlighting that there are as many ways to tell a story as there are stories to be told, about how hope, and daring to believe are at the very core of our humanity, and how the most convincing lies are often the ones we tell ourselves. Although this deals with heavy themes, they are deftly handled and the heart-breaking denouement is cathartic, bringing relief as well as tears as reality hits home, shared by cast and audience alike.

On tour to Nottingham, Salford, Coventry and Sheffield to 14 March