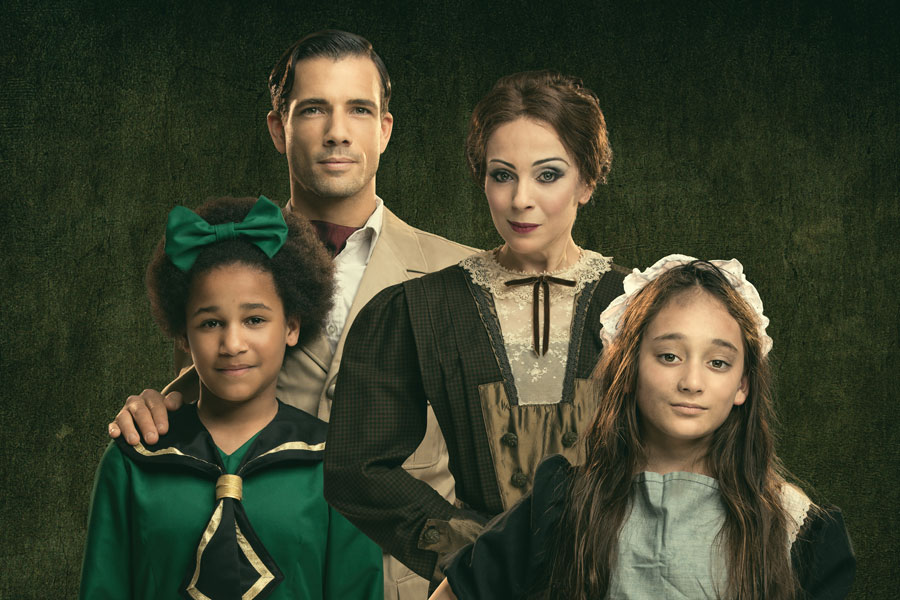 For people who tire of reality, there is always escapist fantasy.  And few people do the latter better than Frances Hodgson Burnett, whose day-dream of what it might be like to be an over-indulged child suddenly dropped from cosy cossetting into the privations of working class life is a perennial favourite with explorers of the netherworld of the bourgeois imagination.  A decade or two ago, the US-resident British born composer Andrew Lippa turned his attention to it, with the librettist Brian Crawley, and now their show has appeared for one night only at the South Bank for us to wonder at.  The whole thing was slickly directed by Arlene Phillips, with musical direction by Alan Berry (conducted by Mr Lippa in person!).

Billed as featuring the ‘Royal Philharmonic Concert Orchestra’, the podium looked a little empty with barely a dozen instrumentalists on show, including a mighty drum kit behind the ubiquitous perspex percussion wall.  No matter, their thin sound was miked to the heavens by a sound system that turned their delicate vibrations into something approximating the leaden mass blare of a big pit band.  Contrastingly, the plentiful voices available also got the same treatment, and in Ben Harrison’s sound design, boomed into our ears with drum-splitting intensity, not to say cachophanous muddiness, making Crawley’s lyrics frequently disappear into a haze of noise.  Nic Farman had much more success with his lighting, filling the hall with many beautiful effects, but an unfortunate decision meant that the twin choirs of mixed Arts Educational Graduate Students and Alumni and Children’s Choir were shrouded in darkness for most of the evening, which seemed a little unkind, especially when they seemed to be singing so well.

The soloists had more of an effortful time of it.  An exception to this was Danny Mac (as the wayward dad, Captain Crewe, abandoning his apparently treasured daughter Sara (clarion-voiced Jasmine Sakyiama) to the merciless, not to say cardboard cruelties of Amanda Abbington’s one-and-a-half-dimensional Miss Minchin – no relation to the author of ‘Matilda’, we are assured): he alone seemed to understand that the acoustics of the RFH are really rather good and don’t need to be pushed to do their job.  His voice was relaxed, beautifully supported, gracefully phrased and alive to every nuance of his part; he also knew how to act convincingly on a nearly empty concert platform, using generously distributed gestures to expand upon the reach of his every utterance, whether that was sweeping the plot along in great sideways arabesques, or lifting his daughter aloft with both arms outstretched, there was an exciting athleticism to his performance that was – to be honest – worth the price of the ticket alone.

Sadly, it wasn’t his show.  Although the book gave him plenty of stage time in the first half – criss-crossing his way to Timbuktu in cut-away scenes a long way away from the main action in London – he all but vanished after the interval.  A number of other players scarcely got a look in: Landi Oshinowo had a couple of fleeting moments; Rosanna Hyland blazed through the bizarrely construed role of Queen Netflix (she’s supposed to be Queen Vic, but as cast here came across as about 40 years too young!); Alexia Khadime was under-used as Aljana; Adam J Bernard made the best of his pasteboard role as Pasko – momentarily filling the hall with much needed excitement in his surprise (bolted on?) 2nd act showstopper, which launched into entirely contemporary musical territory, reminding us of all the things the rest of the sub-Alan-Menken-esque score was not delivering; Shvorne Marks stood around nobly as Grown Up Sara; and even Rebecca Trehearn managed to keep a smile while being sidelined in the ‘Miss Honey’ role of Miss Amelia – she only got one little number to herself – and sang it magnificently – but even that segued into another, weaker number, denying her any applause (and the audience any satisfaction).

But really, this was Sakyiama’s show.  She smiled a lot, sang loudly and clearly, and with an almost unvarying tone.  Not for nothing do Italians refer to such child-performers as having ‘voci bianchi’: white voices (as opposed to the adult versions, which contain the ‘colour’).  She had to carry it, much in the manner of Matilda or Little Orphan Annie, two very much more successful shows which this poor imitator does all it can to ape, in the most craven and insincere manner.  And to little effect.  Even with her sidekick Jasmine Nituan (as the stoic underclass Becky) to banter with.  Or with the more bitchy fellow inmates of Miss Minchin’s Maximum Security Asylum for Abandoned Infants on hand for their – utterly conventional and predictable – scenes.  Nothing surprised.

Audiences cannot be fooled that easily.  They know when they’re being short-changed.  And, even when a piece is as craftily stage-managed as this, contrived to meet all the clicheed expectations of child-exploitation musicals, including Christmas and an overlong rip-off of ‘The Lion King’ thrown in for good measure (all that were missing were lots of birds on long poles swooping above our heads, and I would not have been at all surprised if someone had informed us that the school motto was, ‘Ipi Tombi Hakuna Mutata’), even with all this schtick, the public still refuses to be duped.  Were it not served up as a kind of glorified School Play, with the roomy auditorium of the RFH thronged with doting mums and dads and brothers and sisters and their uncles and their aunts and neighbours and best friends and cousins by the dozens, then who, really, would want to go and sit through it?

Even to hear Danny Mac sing so gloriously.