Sophie Adnitt reviews A Lesson From Auschwitz by James Hyland at the Time and Leisure Studio Wimbledon. 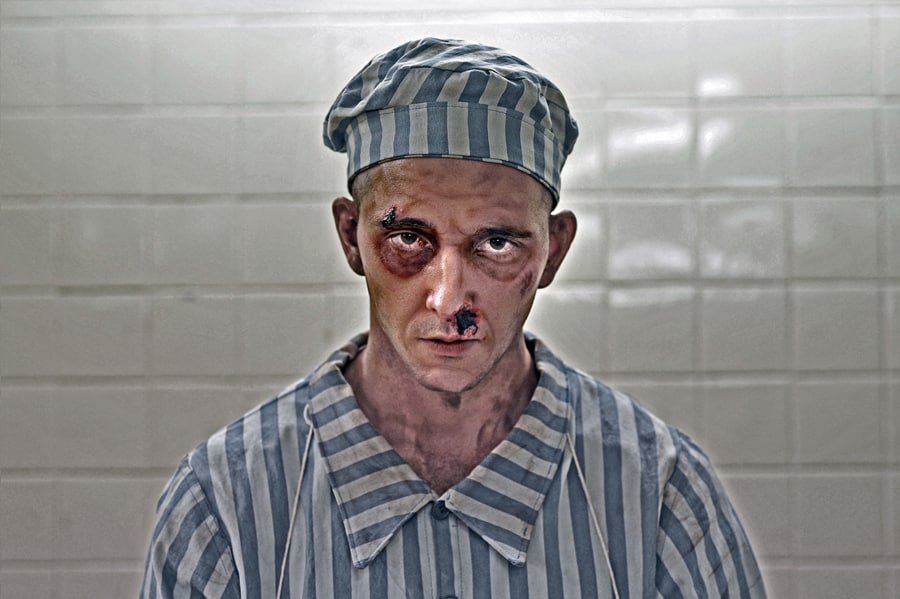 A sixty minute tirade of hate, delivered as a lecture to Nazi officers at Auschwitz and heralding the commencement of the Final Solution, A Lesson From Auschwitz does not make for easy viewing from the start. Upon the audience’s arrival a prisoner from the camp (Michael Shon) is stood onstage, slumped in exhaustion and bloody nosed. He stands like it’s an immense effort, swaying a little from time to time as if he might collapse and makes a haunting figure. As the play begins, he is joined by the evening’s speaker: Rudolf Höss, Auschwitz Commandant (James Hyland, who also directed, wrote and produced the play).

Höss welcomes us and addresses us as his comrades. His character takes the bulk of the piece’s dialogue, and the majority is delivered directly out towards the audience in a way that is both confrontational and makes us feel uncomfortably complicit. Höss’ lessons are a series of vicious, anti-semitic mantras, demonstrated through the brutal humiliation and abuse of his Jewish prisoner, recent escapee Abraham Könisberg. This play is dark, disturbing and difficult to watch. However, as a piece of theatre it excels in practically every single way. 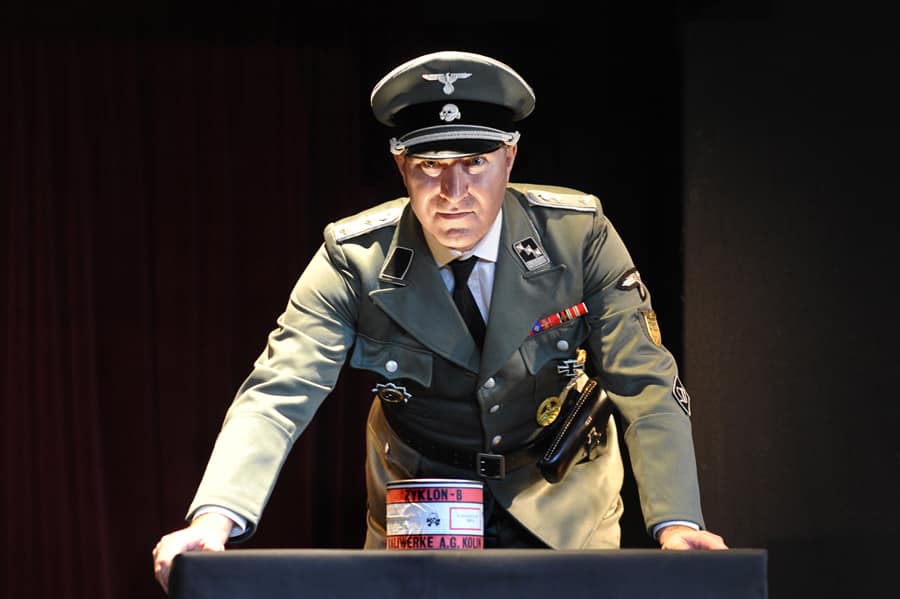 There’s a tendency for creatives who wear multiple hats to be a little bit precious about their work, but not Hyland, who handles the performance and direction of the piece with the necessary levels of professionalism and skill required. Formidable and physically imposing from the off, he delivers Höss’ horrific views with unwavering conviction and the style, variation and intonation of an accomplished public speaker. Whilst Shon has far less to say, his physicality is brilliantly, if heartbreakingly realised, as Könisberg’s pain and exhaustion virtually radiate from him. Within his few lines every word is an effort to choke out, and when he struggles to his feet at one point his legs tremble with the strain. Despite Höss’ showmanship and Könisberg’s cries of agony, the performances thankfully never enter into melodramatics. On the contrary, both are so utterly convincing that a sequence where Könisberg is flogged had me on the verge of shouting for Höss to stop.

An unexpected turn in the narrative is so subtly set up and so devastatingly paid off, seconds after the audience realises what it is, that within an instant it sheds new light on the entirety of what’s gone before. Ultimately this is two actors, a table and a few props and yet the work itself is of such quality that it should be held up as an example of what can be achieved with so few trappings. But more than this, A Lesson From Auschwitz is a forceful look back at how terrifyingly far an ideology can go. The fact it is delivered in real time and Höss’ unwavering, unshakeable belief in what he is doing, rationalising the utterly irrational, makes this piece all the more intensely horrifying. The audience leaves shaken and silent.

For subject matter and content, as well as the aspect that there are moments of this play that you genuinely cannot bear to watch, it feels wrong to praise A Lesson From Auschwitz, but for construction, execution, skill, and a shocking reminder of humanity’s darkest moment, it is an exceptional piece of work and a vital reminder that something like this can never be allowed to happen again.

FIND OUT MORE ABOUT A LESSON OF AUSCHWITZ