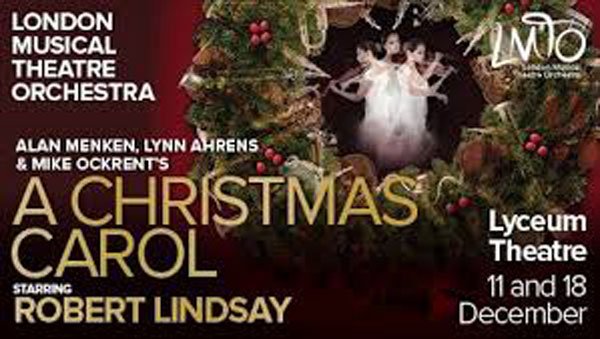 Seeing this sprawling, grand, majestic musical entertainment again in the once splendid surroundings of Bertie Crewe’s opulently spacious rococo interior (behind Beazley’s proudly neo-classical facade), with the full resources of the LMTO massed on stage, complete with a chorus and a line up of superb soloists, all in evening dress, flanked by a brace of sparkling Christmas trees, and beneath the trademark red banners of this specialist orchestra, in this melodramatic, sentimental story of vice and redemption, it is easy to think that there is rather more of nineteenth century French grande-opera about it than the conventional trappings and concerns of Broadway showbiz.  Hearing Alan Menken’s stunning score, given lush and vivid life in Michael Starobin’s gorgeous orchestrations, it is easy to imagine oneself back in the world of Meyerbeer, Gounod and Berlioz, where mighty moral struggles between Good and Evil are slogged out, to the sound of powerful blasts of colour from a symphony orchestra, and vaulting voices tear into our hearts with artful and yet simple melodies, telling a story in which our sympathies are never going to be confused: this is the open and shut case of the miser who finds salvation, through rediscovering the magic of Christmas.

Written to grace the gargantuan space of Madison Square Gardens, where it did service 20 times a week over the holiday season for 10 years running, author Mike Ockrent has axed most of the lengthy narrative passages, replacing them with tauter scenes featuring often largely invented minor characters, who dramatise, rather than merely tell, the path of Scrooge’s crimes and penance.  Lynn Ahrens furnishes lyrics that neatly match his intentions, while allowing the figures to attain more aesthetic complexity, if not actual depth.  Their business here is to tell a plain story with a strongly articulated ethical message: the single-minded pursuit of money cannot buy true happiness.  It is a maxim we like to hear repeated at this time of year – even if what happens in the rest of the year tends to disprove its claims to reliability.  And who better to make flesh the central character in this hopeful parable for the stage than the popularly adored Robert Lindsay, whose latter-day irascibility and  knowing, Ron Moody-like manipulation of the huge audience, are perfect for Scrooge and the central pleasures in this outing.

The LMTO have wisely situated their concert performances of this re-imagining of Dickens’ famous moral fable in a setting that makes the characters not only appear larger than life, but also more vividly and intensely human for their being contrasted so starkly with the deteriorating ambience of a theatre that is getting to look as if it should really be hosting ‘Follies’, immediately prior to its demolition.  Glenn Carter gives us a fairly likeable Jacob Marley, and Sophie-Louise Dann – buxom and brassy in shiny royal blue sequins – walks off with her renditions of Mrs Fezziwig and Scrooge’s invented housekeeper, Mrs Mops.  Lucie Jones, by constrast, makes an exact foil for her with her three roles: Emily, the Ghost of Christmas Future and a Blind Old Hag.  Michael Xavier makes a sympathetic but not saccharine show of Bob Cratchit, with Rebecca Lock his iron-willed spouse.  Tobias Ungleson is a clarion-lunged Tiny Tim – no helpless invalid he!  And Hugh Maynard is suitably warm and vivacious as the Ghost of Christmas Present.  It is down to Gemma Sutton to drag the Everyman anti-hero into Christmas Past, where Aaron Gelkoff captures his lost innocence, and Ivy Pratt the sweetness of his sister Fan.  Cameron Potts makes a matinee-idol’ish Young Scrooge and Sylvie Erskine a lovely Grace Smythe.  Nicolas Colicos makes up the rest of the podium with his triple threat of Fezziwig, the Beadle and Old Joe.  The choir of sixteen get plenty to do and go great guns about doing it, too.

However, it is very much MD Freddie Tapner’s evening.  His gleeful enjoyment in welcoming us into this world – in a talk that is perhaps the briefest I have heard him give – is warmly received, but it hardly prepares us for his ability to melt into the tissue of his invention, this incredible band, and to merge with it in its making of utterly splendid music.  What a joy to hear it again.  And how much longer will it be before this troupe make their way onto the stage at the Albert Hall for the Proms?  Not long I should think.  Especially when Shaun Kerrison is on hand to manoeuvre everybody around with such deft unobtrusiveness and facility, and Mike Robertson floods the theatre with such dramatic lighting, and Nick Lidster (for Autograph) mixes and projects the sound to such perfection.  Another ace roll out from executive producers Clive Chenery and Joanne Benjamin.

Catch them all one more time in this production on Monday 18th December: a perfect warm-up for the real thing the following week.

BOOK TICKETS TO A CHRISTMAS CAROL