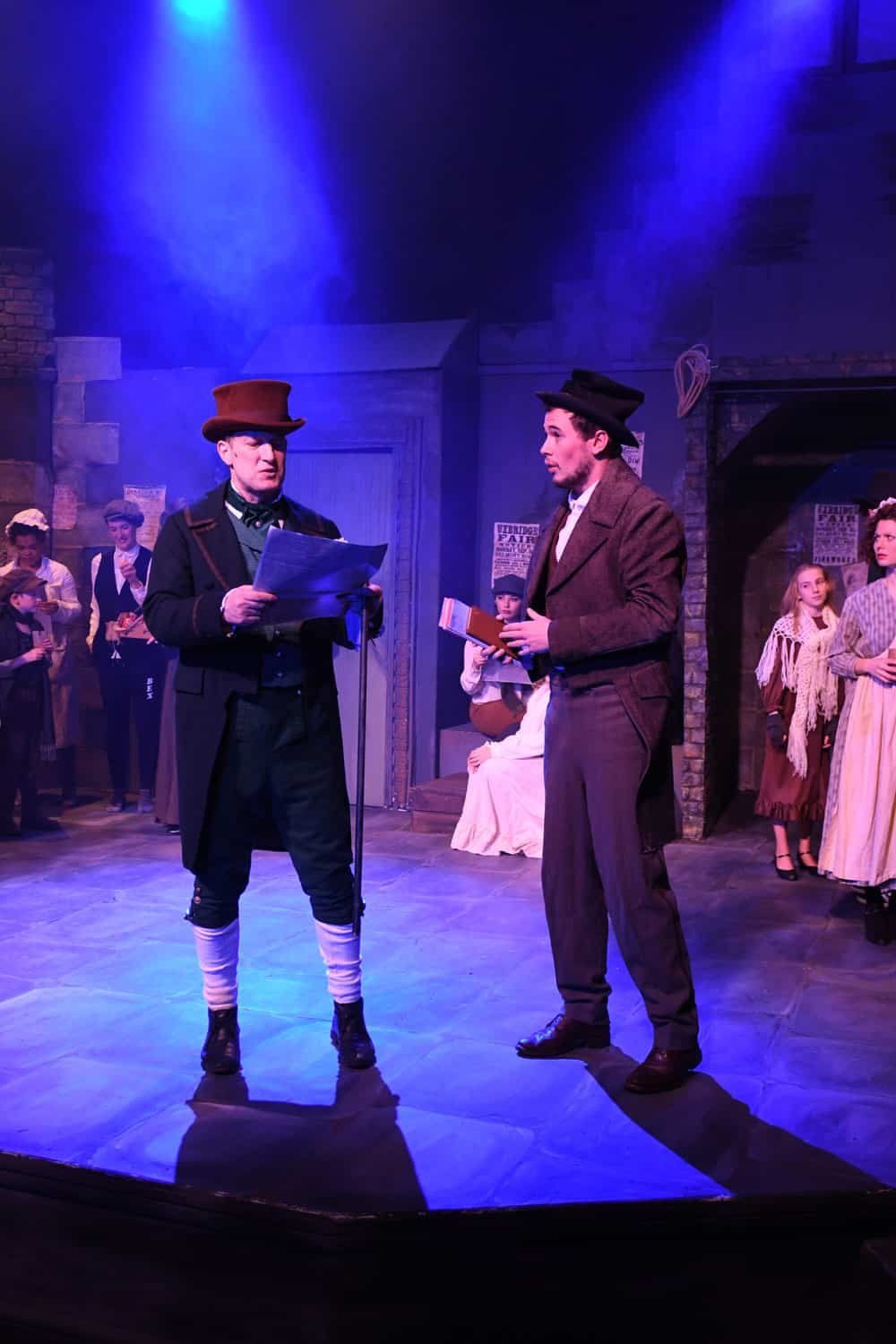 This year, the enterprising big small theatre on the Wandsworth Road brings this eternally popular Dickens’ ghost story to the stage in a thoroughly presentable amateur production. The choice is interesting. This version was put together in the early 90s by Mike Ockrent and Lynn Ahrens for Radio City Productions to show on the mammoth stage of Madison Square Garden, with music by Alan Menken, and lyrics by Ahrens. The original production, reprised for a decade each Christmastime, was staged by Susan Stroman. It mixes small scenes featuring Scrooge in conversation with various humans and then apparitions along with spectacular production numbers for the ensemble and full-throttle huge orchestra. 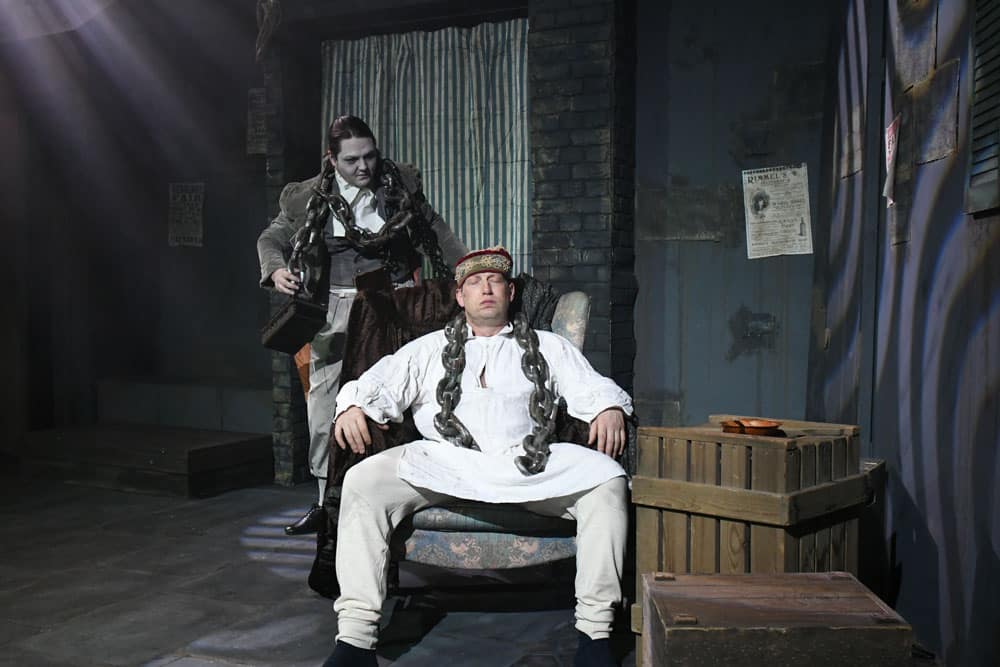 This is emphatically not the 1970 British film with Albert Finney in the title role, turned into a stage musical hard on the heels of the launch of the Ahrens, Mencken, Ockrent presentation, with book, music and lyrics by Leslie Bricusse, in which Tommy Steele has been touring on and off for the past few years. No, for that you will need to wait for Bill Kenwright to wheel out the next leg of its progress around the nation. This is the American product, which happens to have been very recently seen in London; in fact, it was only at the start of this week that we experienced it in the hands of London Musical Theatre Orchestra’s concert performance, with Robert Lindsay in the lead, selling out the Lyceum Theatre on ‘The Lion King’s day off. Significantly, though, the presence of names like those above in the main role, it seems clear that this is a story that needs charisma at its heart. 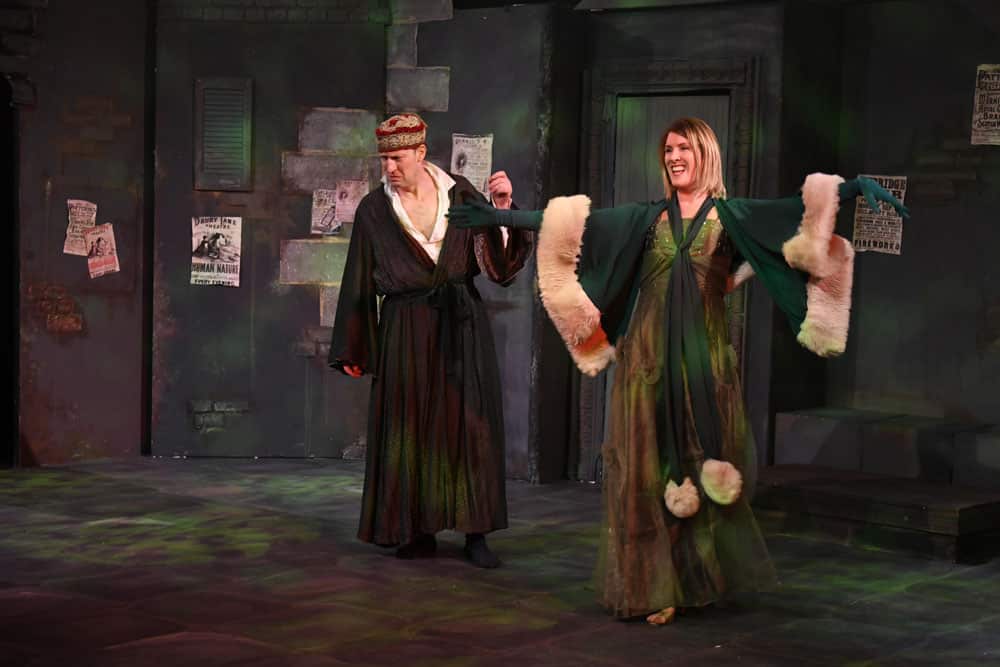 This production by Artistic Director, Mark Magill, working in collaboration with Martin John Bristow was an ensemble affair, and Magill ingeniously extends the performance space off the platform of the stage and into the auditorium with his dismal early Victorian (back-)street scene to accommodate their impressive cast of 22. Costumed by Magill and choreographer James Thacker (who provides everything from quadrilles to tap dances), the company looked their parts. And Bristow lit it effectively. The theatre sees itself as a community-based organisation and this production certainly delivers in drawing in a wide audience. 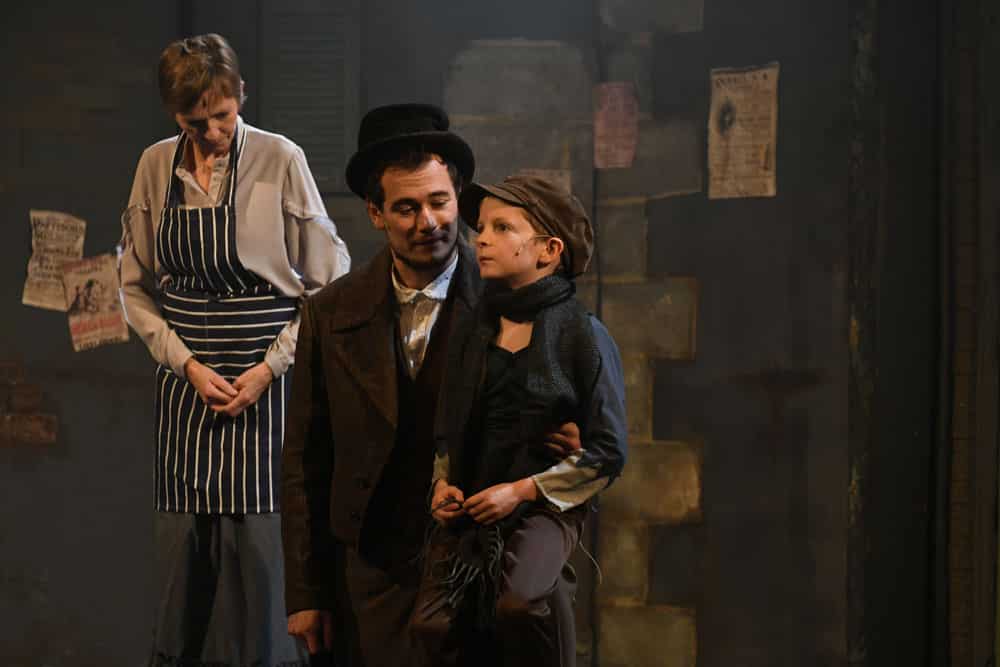 The cast ranges from members of the LOST Youth Theatre (delivering impressively clear and confident performances), young members of the acting profession (with strong, trained voices and good dance moves), more seasoned performers returning to the theatre after breaks, and those with extensive amateur experience looking to move into the professional field. This makes for a fascinating viewing experience. The score is quite demanding, with a very large quantity of musical numbers; the cast were generally on securer ground with the choral pieces, although the young professionals often made a good fist of managing the sometimes tricky solo lines. Pre-recorded backing tracks were used to accompany the singers (who were sometimes amplified, and sometimes not).

Suffice it to say that the whole was appreciated by the local audience, who brought with them to the theatre their loyal appreciation and good nature.

(In view of the amateur status of the production, no stars are allocated.)

BOOK TICKETS FOR A CHRISTMAS CAROL AT LOST THEATRE