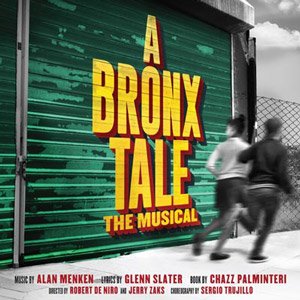 A Bronx Tale is a new Broadway musical with music by Alan Menken and lyrics by Glenn Slater. Based on the one man show and later film of the same name that was devised by Chazz Palminteri.

It’s great to see Alan Menken return to Broadway with a non-Disney based show. Menken’s ability to channel the musical stylings of the period for which he is writing is perhaps his greatest strength and in A Bronx Tale you are effortlessly transported back in time through the brassy, sax driven pulse of the sixties.

A Bronx Tale is the story of a young boy from a working-class family growing up in a neighbourhood dominated by organised crime. Befriending the local mob boss as a young boy, Calogero grows up in the middle of his father ( a bus driver) who tries to instil decent values in the boy whilst the allure of Sonny (the mob boss) continues to attract the boy.

Central to the telling of this tale are the central performances of Hudson Loverro as Young Calogero, Nick Cordero as Sonny, Richard H Blake as Lorenzo and Bobby Conte Thornton as the older Calogero. The performances of these four performers are accomplished and carry the guts of this coming of age drama effortlessly. Loverro’s youthful exuberance is perfectly showcased in numbers like I Like It, it’s a style that seems to transfer to Bobby Conte Thornton’s older Calogero when he sings Out Of Your Head. You can really hear the father/son dynamic in Look To Your Heart. These are wonderfully drawn characters that are realised perfectly by this quartet of actors. Add in the exuberance of the ensemble and incredible harmony work and it’s all there – just listen!

Of note are Corderro’s tracks One Of The Great Ones and Nicky Machiavelli which have the delivery and stylings of a Rat Pack Vegas show. Sublime!

What perhaps elevates A Bronx Tale is the weaving of the honesty of Palminteri’s story with Glenn Slater’s lyrics. Both co-mingle to ensure that each number drives the story forward without ever compromising the nature of this immensely personal story.

Like Jersey Boys before it, A Bronx Tale works because it’s real, there are times you’d swear that period songs have been incorporated into this show, but that’s the magic of Menken and Slater, their eye for detail and expert craftsmanship shines through in songs, the majority of which could be played out of context and enjoyed. Played in context they make A Bronx Tale a strong, brutally honest story of a young boy who grows into manhood with two influences, showing that perhaps it’s a measure of the man that he emerged, and made something of himself.

ORDER A COPY OF A BRONX TALE THROUGH AMAZON

BOOK TICKETS TO A BRONX TALE ON BROADWAY