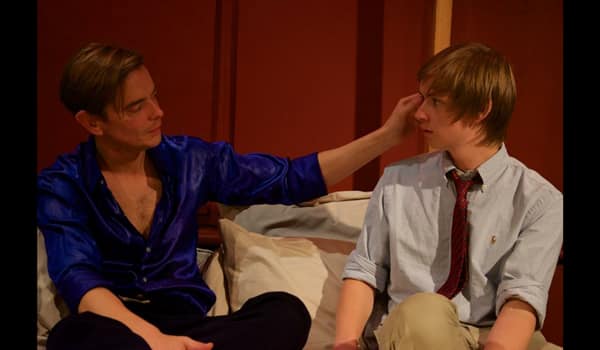 The set is simple but lucid – a double bed, and with occasional tables at different points. The necessaries for gin and tonic, a record player and a pile of LPs from the late 60s.. Judy, Sondheim, Streisand are the reference points. It is spartan, but neat and clean – a cheap lodging house on Beacon Street, Boston frequented by actors playing a season in town.

An opening monologue of insinuating charm fleshes out the picture as Robert (Matthew Baldwin) sets the scene for us historically, geographically and emotionally. It is 1970 in the theatre-world of Boston and in the middle of a run. Robert is back in America for the first time in a while and having a great time at work and play. We are in what for him is an era of sexual liberation and exuberance where traditional boundaries are falling away, and even for someone like Robert, approaching middle age, life has never been so good. Robert is a typical Brit-abroad: wry, sceptical and reserved but also fully aware that in the US, and particularly at this time, he can re-invent himself as something else with impunity.

We become aware that what we are about to see is the story of one important bedroom encounter which left an important legacy, a record of a unique spot of time when two people lived together fully in the moment and from thereon in memory. The monologue is vital in setting up this atmosphere of romantic and sexual anticipation with an undertow of regret and offers a case study in how to establish and modulate tone. This is just the first of many examples of the skill of playwright Bill Rosenfield in establishing character with detailed brushstrokes of ironic comedy and plausible romance as the action unfolds.

Robert is an actor feeling his age and the consequences of decisions he now regrets. After years of cashing in on his good looks in rom-com male ingénue roles he feels he has passed up the chance to really develop his talent to the full in riskier fare. He has also reached a plateau in his personal life. He has a long-term partner back home, but they have agreed to spend time apart to review their future.

Meeting Robert in his hotel room is Alan ((Jak Ford-Lane) who is working as an ASM in the same production. He is a young lad from Ohio, uncertain about his sexuality and not at all clear what he wants from and with Robert, other than that he finds his company alluring in a variety of ways.

It is clear from the start that this play – which runs straight through for eighty minutes – is potentially a drama about coming-out and sexual initiation, and indeed it becomes both of those things. But it is a tribute to the skill of the writing and the actors that it becomes a lot more than that too. Rosenfield plays his cards closely and keeps us guessing for a long time. Moreover, there is the same careful variation of tone and intensity that was present right at the start.

There are sections which possess real sexual electricity – including a foot massage that only goes to show that less is more often than not more, once the imaginations of the audience are engaged! But there are also several points of repose and reflection which allow us to hear and understand Jak’s fears and anxieties and confusion in real time. Above all there is lots of wit and humourand tenderness. It is therefore a very even-handed and textured piece of writing, in which there is a central narrative of seduction but nuanced and inflected with the different perspectives that a 20-year age difference can bring.

Only the ending, while still plausible, seems a missed opportunity. After taking us so far into the mental worlds of these two men, and building up the significance of this encounter for both of them, I felt that the gentle petering out of the narrative, while perhaps true to life, was dramatically a disappointment. This is not a call for unmerited melodramatic twists and turns, and more perhaps for a symmetrical bracketing monologue – a letter, say, from one character to the other which might have mirrored and balanced the excellent mood-painting of the opening.

There are two very fine performances at the heart of the success of the evening. Baldwin uses all his extensive experience in this repertory as actor and author to leave a memorable portrait of Robert’s charm, regrets and essentially unresolved life. It is a tricky business to present an image of a confident seducer alongside that of a man riven with all sorts of internal conflicts and tensions, yet he does this with great skill and humour, and exquisite variations of pace.

No less subtle is Ford-Lane’s take on the apparently innocent and naïve Jak. As the play progresses we are led to question whether Jak is quite the blank sheet of paper he claims to be. How much of what he says is fully true? What does he really want from this encounter? Moreover, it is through this strong, carefully calcuated performance that we gradually sense the tables of authority turning in the later scenes.

It is through Jak rather than Robert that some of the most important questions about gay relationships are asked, whether about the connection or separation of love and sex and the consequences that follow from different pathways chosen; or whether the choices of Robert’s newly liberated generation were the wisest in the long term. It is good to see these issues discussed for once outside the perspective of HIV/AIDS, and that is another reason to praise the author’s decision to site the action in 1970. Director Joshua Stamp-Simon sets a good pace and ensure that the actors make full use of the limited space.

Music and musical theatre hover importantly in the background of this play. Rosenfield for many years supervised show recordings in New York, including for many of Sondheim’s works. It is therefore not a surprise that the play contains telling musical interventions and many knowing references to Sondheim songs. Company is referenced explicitly – and in some ways this whole play is an extrapolation of ‘Barcelona’. ‘My fault, I fear’, one of the characters says near to the end, and on that invocation of A Little Night Music suddenly you realize the common tone of romantic regret and semi-farcical missed opportunities, and the sources of the dilemmas the play seeks to dramatise. This may be a specifically gay play, but its emotional pillars stand proud as general and eternal themes.

One final, but not I hope carping point….The Hope Theatre is a small and intimate space, which deserves a lot of credit for its bold choice of repertory and its exemplary stance on wages for the actors and creatives who perform for it. However, it would be wonderful if some wealthy patron from the stuccoed wedding-cake mansions of neighbouring Barnsbury could fund some better sound-proofing. In this delicate drama, the sirens and swish-and-sigh of passing cars in the rain on Upper Street were very distracting. The actors deserve better.