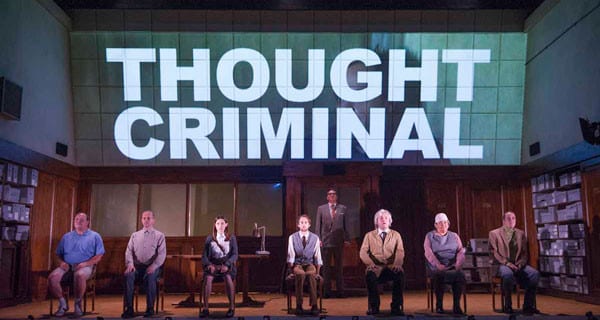 When I first read George Orwell’s terrifying masterpiece, 1984, I can vividly remember two things: that 1984 seemed an aeon away and that the sequence with the caged rats seemed unbeatable in terms of potential for torture.

But, I also thought that the idea that a Government would brainwash people was pure fantasy; that our world would never become one where surveillance was the norm and privacy an all but forgotten everyday expectation; that electronic mediums would never control our lives or be used as a way of controlling, pacifying or subjugating a free society; that the idea that a government would spy on its constituents or arrest them without advising them why they were arrested was the stuff of pantomime.

And yet here we are. In a world where, frankly, Orwell’s visions seem almost tame by comparison to a reality which encompasses regimes where homosexuals are, effectively, “non-persons”; which includes an America (the supposed home of the Free) which permits capture and imprisonment and torture without habeus corpus; which every day sees people using social media unable to discern between fact and fiction; which permits the existence of Fox News; which actually does have Newspeak and Oldspeak, certainly in digital communication, but elsewhere through the tenacious grip of political correctness; which can see people like Snowden and Manning treated worse than mass murderers; which can see Australia governed in secrecy and being reformed in a way that makes the future the past.

But, as enlivened in Robert Ickes and Duncan Macmillan’s visceral and terrifically intense production of their adaption of Orwell’s classic novel, which concluded its run at the Almeida Theatre last night but which is shortly to transfer to the West End, tame is the last word that comes to mind.

The adaptation manages to synthesise all of the great terrors Orwell envisioned and to present them in an interesting, compelling and quite frightening way. But, at the same time, there is a reserve, a distance, a sense of observation which, rather than detract from the experience, intensifies it. You don’t particularly empathise with Winston on his journey, but you experience it with him, you experience relief that it is happening to him and not you, and you wonder how you would cope, what you would do?

Partly, this is because of the detached, but expert, acting from the whole cast. Partly, it is because screens and videos have a prominent place in the composition of the production, so that the audience not only sees the action, but sees it being seen through hidden surveillance devices. So, the question of what is real and what is imaginary becomes elusive, intangible.

The result is as disturbing a time in the theatre as it might be possible to have.

And bravo for that. Because Orwell was not writing a novel to read while languishing by a pool or the lapping waves of an ocean. And even though one’s perception may have changed since the novel was first read, its raw, undermining power still crackles with a fierce and frightening intensity. The fundamental questions are still the same: Who can you trust? What is history? What is reality? What does it take you break you?

Chloe Lamford provides a marvellous set which neatly combines the duality in Winston’s life: it seems real but feels like it is not. The multimedia aspects are seamlessly entwined. Together with Natasha Chivers’ exceptional lighting (there are moments when one shares Winston’s torture simply by the lighting) the space pulses with hidden power and provides for great moments: the first snap blackout allows six people to silently and suddenly appear on stage as if by magic. That instant sets the tone – were they there and we did not see them or are they really there now?

Mark Arends is wonderful as Winston, completely believable in every aspect. It is all clear: the questions, the passion, the certainty, the fear, the uncertainty, the humiliation, the last remaining fragile essence of humanity. It’s a bravura performance. The torture scenes are almost unbearable.

Just as powerful is Tim Dutton’s O’Brien, Winston’s enigmatic, bloodless, smiling interrogator and destroyer. He plays Winston like an instrument and there is a musical sense to his delivery which makes it all the more compelling and horrific.

Hara Yannas is especially good as Julia, but the entire ensemble does excellent work. They specialise in weirdness and insular disorientation.

This really is first-rate modern theatre: challenging, entertaining and questioning.

Rupert Goold’s vision for the Almeida is electrifying. The first trio of productions, Chimerica, American Pyscho the Musical and this 1984, suggest that a new golden age of the Almeida upon us. The prospect of the next one, King Charles III, bodes well.

Book tickets to 1984 at The Playhouse Theatre