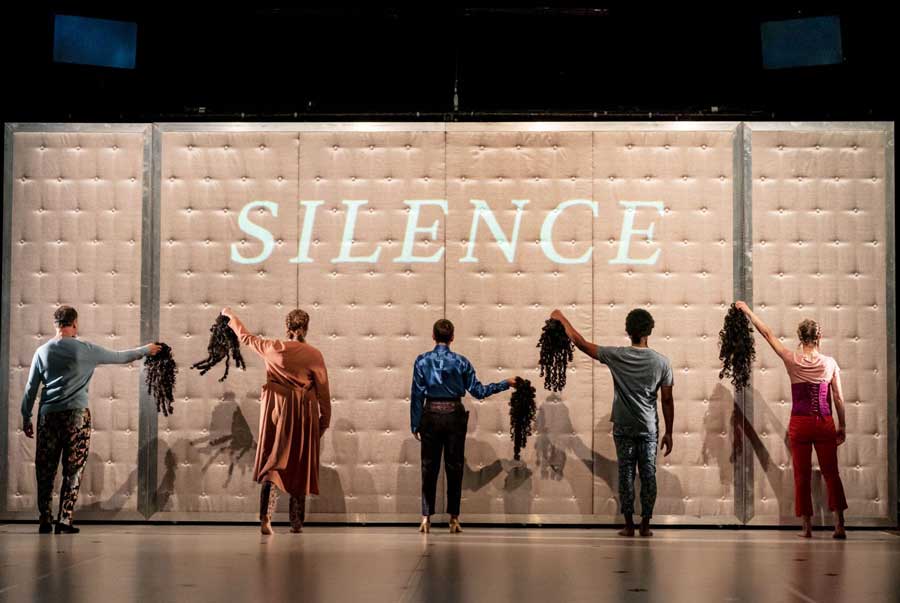 Gore Vidal once said, ‘Fashions come and go, but the avant-garde is always the same’, and so it proves with this wordy, rather static and monumental entertainment from the stable of Annie-B Parson’s Big Dance Theater from the USA, making a fleeting 4-night visit to Waterloo.  As a riposte to the vision of Trump’s America, it can hardly be beaten: in every respect, it seeks to cock a snook at all the current GOP pieties, preventing us from indulging in any emotional mood, and insisting upon not only the validity but also the supremacy of the life of the mind as the primum mobile of national life.  It is a kind of decorated lecture, with some – not very much – movement.  As a ‘dance’ show it may be being promulgated, but the ghost of Pina Bausch stalks large here, with dry, relentless rigour.  Although there are a lot of smiles, and the ‘playfulness’ of art is called upon, the intention appears doggedly serious.  Insiders will get the in-jokes – they certainly laughed loudly enough at them on Press Night.  But I am not among their number.  And I wonder how a more regular issue theatre-goer might react to this display of knowing intellectualism. 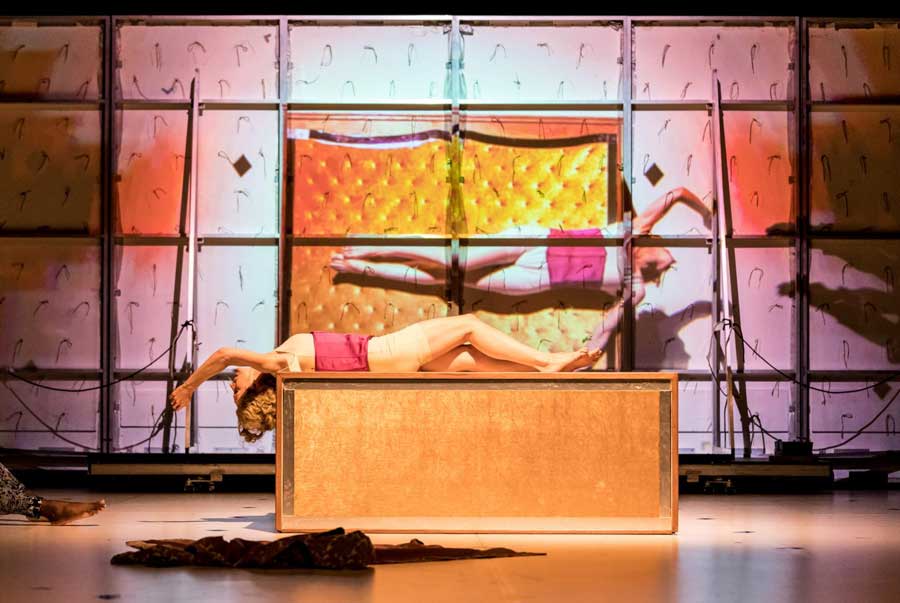 Launched a couple of years ago in the States, and since then widely travelled with the company (last month it was shown in Berlin), the starting point of this work is the canon of great Eng Lit titles, and of those the salient point of interest here is in the seventeenth century secret diary of Samuel Pepys.  Pepys famously wrote this in an arcane code known only to himself that resisted posthumous deciphering for centuries after his death.  Oddly, he is identified in the programme as ‘over-sharing’, but as far as we know no one else could read what he wrote: so what does that mean?  Perhaps something else was intended, but this single point knocked a chip out of the smart veneer of the show and made me question more and more of it as it went along.  Could we trust what A-B P and her cohorts were presenting to us? 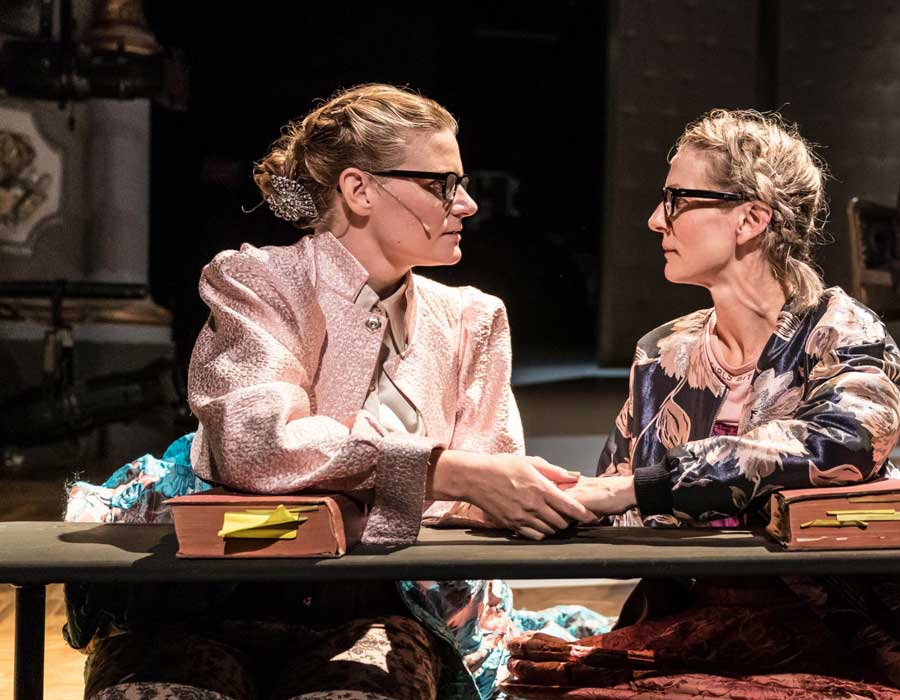 Well, in simple terms, the extensive reading aloud from the unexpurgated diaries seems to be rich fodder for the #Me,Too generation.  Yes, this is yet another story of historical revisionism, telling the story of a woman – Mrs Pepys – who was sidelined through her relationship to a celebrated man.  In today’s world of cross-gender careers and social and personal freedom, we usually forget that for millennia the ONLY life open to women was that of moving from the world of the father’s family to that of the husband’s.  Yes, since Chaucer, at least, writers have been showing us the few unusual women who could to an extent side-step this trap, but – alas – not everyone can be as autonomous and strong as the Wife of Bath (and even she is defined by her matrimonial status).  Elizabeth, Pepys’ spouse, also kept a diary: but Sam one day in a fit of rage destroyed it, thus silencing her voice.  (The Tolstoys also argued over their diaries: we continue to re-read his, and ignore hers.  And so on.)  So, why didn’t she write it all out again, like T E Lawrence, when he left the entire MS of ‘The Seven Pillars of Wisdom’ on the platform of Reading station?  We will never know. 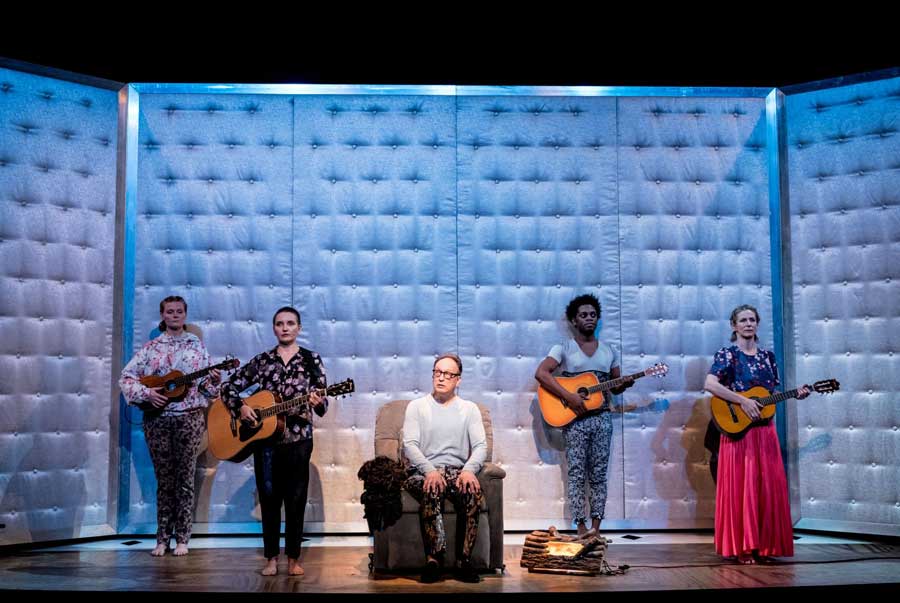 Parson here possibly seeks to bestow upon Elizabeth Pepys the persistence and resilience that she did not feel able to possess in her life.  That is kindness.  And it is a tradition of re-visiting the past, and seeing it with today’s eyes that has a long list of credentials.  In movement worked out between her and the company (of Elizabeth DeMent (as Mrs P), Mikeah Ernest Jennings, Cynthia Hopkins, Paul Lazar and Kourtney Rutherford) and in an open, almost skeletal design by Joanne Howard, with frumpy, trashy costumes by Oana Botez, there is nowhere to hide from the storm of ideas launched at the audience.  These are Americans who think.  An element of theatrical showiness is provided in the sometimes flamboyant lighting design of Joe Levasseur and Tei Blow’s splendid soundscape (especially in the on-stage music-making), and through Jeff Larson’s videos.  But the overall mood is one of near-teutonic earnestness.  The show is only 80 minutes or so long, but feels a great deal longer.  The sheer intensity of the programme, stuffed with important thoughts and big concepts, would be exhausting were there more of it.

As it is, after barely an hour and a half it shimmies away from us, in an almost off-hand and careless manner, turning off the stream of cerebral activity as deftly as it was turned on.  We are released from its hold.  And free to leave.  And do what?  Think.

FIND OUT MORE ABOUT ANNIE-B PARSON