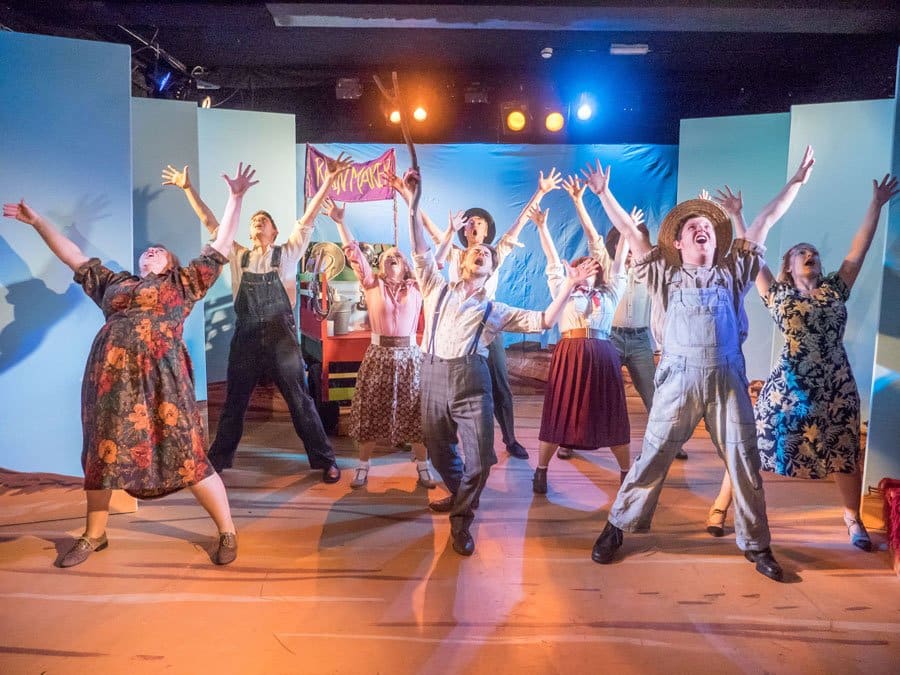 Ever since it first pushed the mercury up in 1963, this Broadway successor to the same songwriting team’s unstoppable ‘The Fantasticks’ has been trying to establish itself in the mainstream repertory. There have been some major revivals, most recently in New York, with Lonny Price directing and no less a star than Audra Mcdonald taking the lead role of Lizzie Curry, and the show’s ‘slice-of-western-life’ milieu has endeared it to stock and regional revivals in the States. But somehow its warmth has not yet thawed the cool reception it has received over here. Why? It’s a perfectly constructed musical comedy with its head and heart firmly pointing towards the modern era, it contains 18 finely written musical numbers by Harvey Schmidt (music) and Tom Jones (lyrics), the script is a smart, clever adaptation by N Richard Nash of his own play, ‘The Rainmaker’, which itself became a legendary film with Katharine Hepburn as Lizzie and Burt Lancaster in one of his most captivating performances as the self-styled Starbuck, the rogue conman of the title. Add to that, it’s easy to stage, with minimal demands being made in terms of costume and sets. So, why don’t we see it all the time? 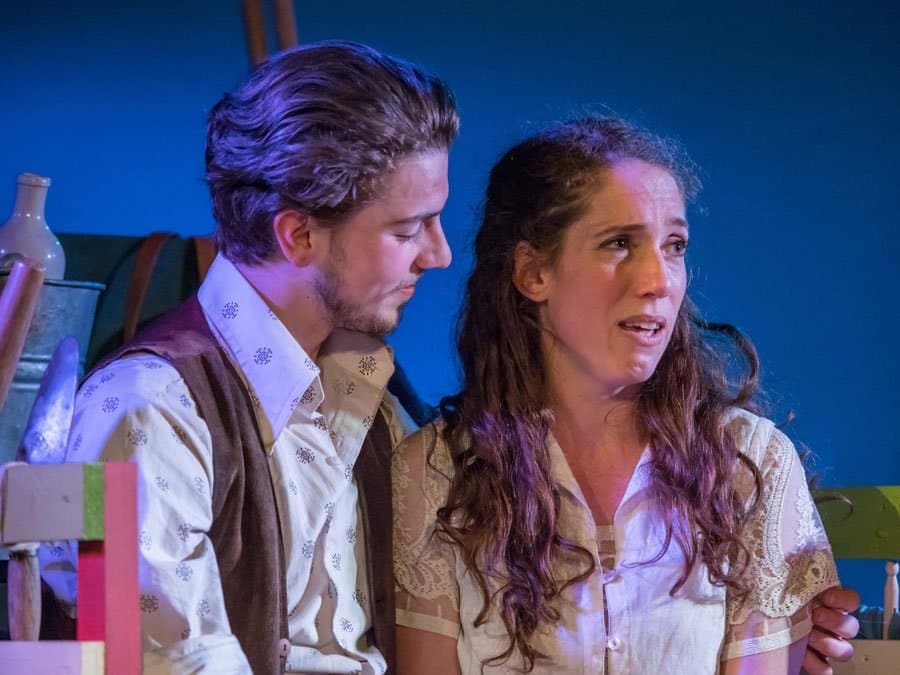 I have no idea. I’ve been to see it twice this week, and have enjoyed it thoroughly. Thanks to the always useful Rose and Crowne in Walthamstow, Andrew Yon has put together a cracking team to do this work the justice it has long sought and so seldom received. Randy Smartnick, who knows the work from productions in the US, returns again to this space to direct a smooth, fluid outing, where the story is given the clarity and lightness it requires. True, there might be more thought-out business in the longer scenes of the first half, but his focus on stillness and concentration on the (for a musical) extremely well-written dialogue works best in the briefer second half. His trusted collaborator choreographer Kate McPhee has flown in from the Riviera to bring the musical staging to life, and does so with a precision and aptness that are quite brilliant: her movements, and the syntax with which they are coordinated, take their cue from the motivic nature of the score, with phrases aligning themselves to particular musical ideas. And this score is exceptionally well written in that respect: it lends itself to intelligent choreography, and in Walthamstow, thanks to McPhee – who knows how to make the most of her dancers – that is just what it gets.

Musically, in charge here in resident MD, Aaron Clingham, and he and his band of Jade Cuthbert (violin), Catriona Cooper (viola), Dominic Veall (cello), Ashley Blasse (guitars and banjo) and Janette Williams (percussion), have a field day with this most ambitious of sound worlds. The strains of Aaron Copland and Samuel Barber are never far from our minds in this lush yet light ambience of ethereal choruses, stomping folk songs, lyrical ballads, and pert variety numbers. There is an undoubted relationship to the Americana of Dick Rodgers, and others, but here it feels like Rodgers and Hammerstein have been put through a meat grinder by Nadia Boulanger. What comes out the other side is transformed, reformed, and grilled at an open air barbeque on the end of hickory sticks for our delectation. 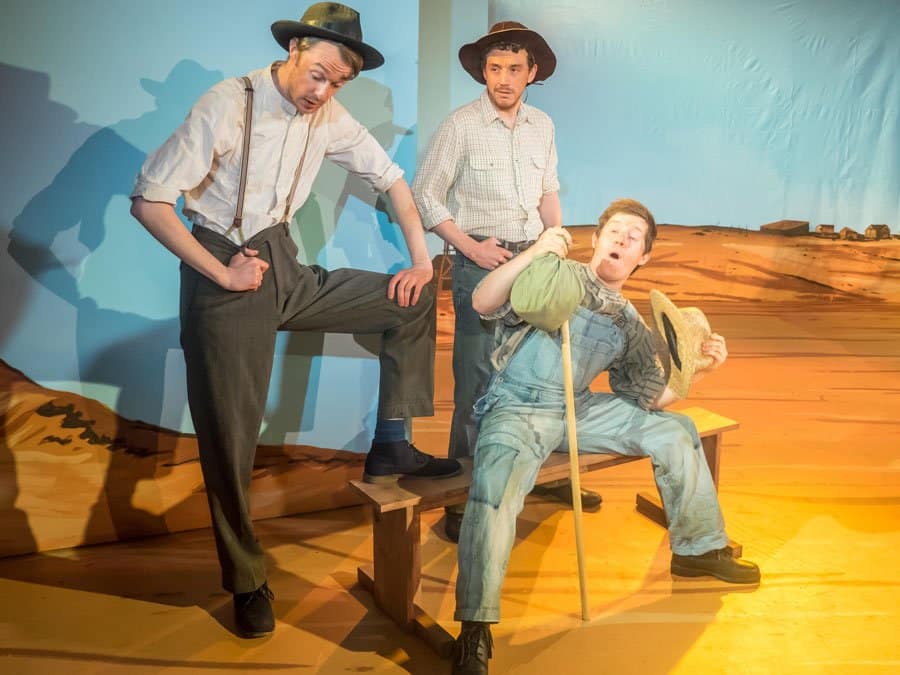 The cast has a ball with all this. Now resident in the UK for twelve years, New Yorker Laurel Dougall does a touching impersonation of a dowdy yet spirited westerner; vocally and in terms of holding the stage she can be a lot more powerful than she allows herself here and perhaps we could see a few more degrees of that as she develops through the story. Similarly, the catalytic role of the shyster Starbuck, who promises he can bring rain to the parched land… for a hundred bucks, is Daniel Urch, who is rather youthful and light in a part that seems to call for more weight. By contrast, tougher customers are Lizzie’s family of H C (Christopher Lyne, oozing masterful experience and gravitas as the father – he REALLY knows what to do with this dialogue), bullyish older brother Noah (David West – a strong physical and vocal presence, clearly signalling he’d be very at home in taking charge of a much larger stage), and daft-as-a-brush younger brother Jimmy (a lovely comedic characterisation from Julian Quijano). Keeping an eye on them is dour local sheriff File (Nick Wyschna, a warm baritone always belying his irascible front). Jimmy takes up with regular ball-of-fun Snookie Updegraff (the terrific Rebecca Withers): their 2nd Act injection of mirth when the plot is getting serious, ‘Little Red Hat’, is one of the high-points of the show.

The ensemble is made up on more well-drawn characters: Joe and Beverly Copeland (Mikey Wooster and Amy Christen-Ford); George and Hanna Curtis (the apparently staid, but actually rather racier Craig Nash and Natalie Durkin; with Sammie-Sue Miller (Francesca Pim) and Phil Mackey (Henry Roadnight) completing the numbers. The detailed, imaginative treatment of these minor figures shows clearly that Smartnick can find much more variety, perhaps when he’s aiming more for humour rather than melodrama.
It only remains for me to draw suitable attention to the spectacular open spaces of the scorched countryside conjured up by Joana Dias’s set. This magisterial sweep of orange and russet terrain, dotted with agricultural buildings, stretching endlessly flatly this way and that under a bleached blue sky works equally well for the daytime and nighttime scenes. It is admonished wonderfully well by her musical comedy costumes for the characters, whose cheerfulness brings their stories into bright focus. In fact, we seem to be watching ‘The Little Drought On the Prairie’. And, if we approach these simple folk with that same artless innocence and sincerity, we won’t go far wrong.

BOOK TICKETS FOR 110 IN THE SHADE