Paul T Davies reviews 10:31, MCR now playing at The Space On The Mile as part of the Edinburgh Fringe. 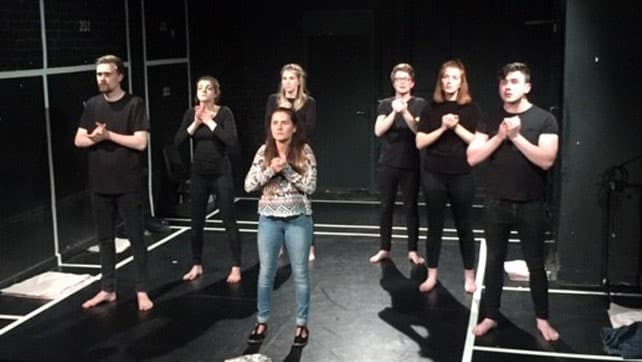 10:31, MCR
Space On The Mile, Edinburgh Fringe
13 August 2019
4 Stars
Book Tickets
Every now and then you come across a show in Edinburgh that allows you to pause, reflect and be quietly moved. This is such a show. It deals with the Manchester Arena bombing, and it is a verbatim piece that brings together voices and stories building up to the explosion and the aftermath. Millennials and Other Terrible Things have created a sensitive piece in which, among other things, breath takes on a significant meaning.
The three performers, Megan Sharman, Ciaran Forde and Rio Montana Topley work seamlessly together, and the core strength of Fabiana Sforza’s beautiful direction is the movement, fluid at times, taut at others, that capture the ages of children and adults alike. It’s performed to a powerful soundscape of voices, sounds and music that stays with you after the show. Despite it’s subject matter, the piece never lectures and rarely shouts, and holds you close until the moving conclusion, beautifully done.
The company have worked closely with Liv’s Trust CIO, a charity set up in memory of Olivia Campbell-Hardy, a victim of the terror attack. It was created to raise money for young people in Manchester to receive education in performing arts, and the show has a collection at the end of every performance. Be quick and catch this haunting piece that stays in the mind and the heart.