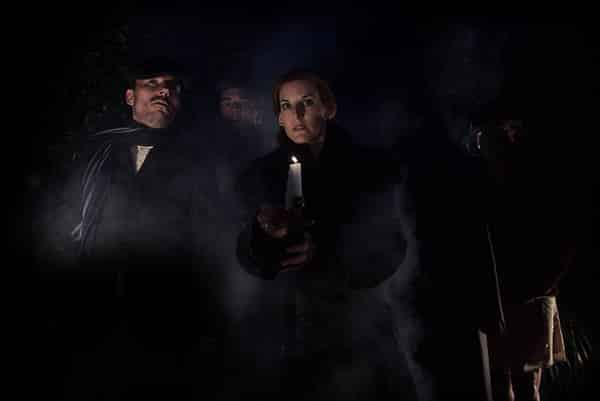 Originally published in 1927 as a novel by a then unknown Priestley, it wasn’t until 1932 that the novel was adapted  by Universal into a film called The Old Dark House, which broke box office records across the UK.

Set in the heart of wildest Wales on a treacherously stormy night where it seems the world itself is going to end, Philip and Margaret Waverton are left with no choice but to abandon their Austin Tourer and seek refuge in an old dark house. Soaked, hungry and exhausted from their ordeal, the Wavertons’ relief at finally being indoors rapidly slips away as it becomes devilishly apparent that their gracious hosts for the evening, the peculiar Femm Family (and indeed the house itself), may be far more frightening than the Welsh mountainside they seek to escape.

J.B. Priestely’s son, Tom Priestley, comments, ‘Benighted was my father’s second novel which was totally unlike his first novel Adam in Moonshine, and indeed unlike anything he wrote later. He liked to try his hand at different genres and, as he told me later, he had to enjoy his writing himself, otherwise how could he expect anyone else to enjoy it? Experiment was a key part of that enjoyment. It will be fascinating to see how it now translates for the stage, a new and very different medium. Of course the blend of characters will be as written but the setting must be adapted for the theatre’.

This production of Benighted will be directed by Stephen Whitson and adapted for the stage by Duncan Gates.

Priestley’s An Inspector Calls will open at the Playhouse Theatre in November.