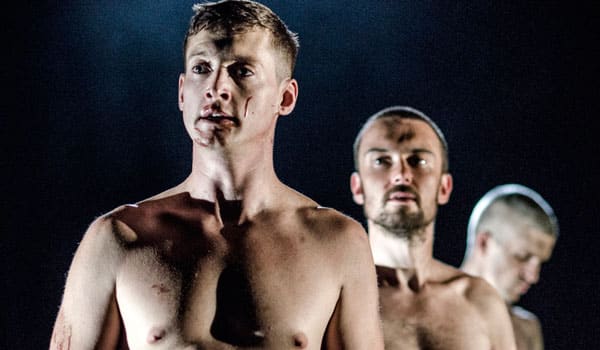 The Curing Room by David Ian Lee, which caused a stir at the 2014 Edinburgh Fringe Festival and subsequently played a limited season at the Pleasance Islington, will return to London this summer with a four week run at the Vaults Theatre, Waterloo from 4 – 29 May.

The Curing Room is a bold, daring thriller based on true events, in which the ensemble of seven male actors perform the show completely nude.

Originally written and developed in New York with a series of workshops and public readings, The Curing Room marked its inaugural production in Edinburgh with the following cast, who will return to London: Rupert Elmes, Tom Holloway, Matt Houston, John Hoye, Harvey Robinson and Marlon Solomon. John Last will join the cast.

Joao de Sousa said, “In spite of the moments of brutality and gore, The Curing Room is a beautifully staged production with an undercurrent of hope and humanity. I’m thrilled to bring the show to new audiences at the Vaults, who’s subterranean setting so ideally suits the design of our production that I feel like it is almost site-specific!. It’s a thriller that shines a light on dark side of human behaviour that is as old as humanity itself – and was inspired by an allegedly true anecdote recalled in George Steiner’s seminal work The Death of Tragedy.  However, what precisely befell these seven men ‘in the last year of the war’ will forever remain conjecture – as will the identities of the men themselves.”

The Curing Room will run at the Vaults Theatre, Waterloo from 4 – 29 May