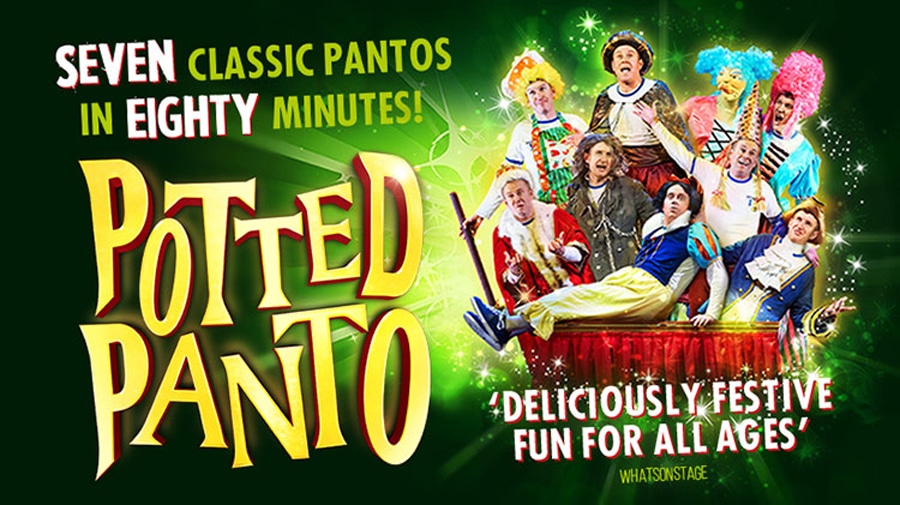 ‘Potted Panto’, written by Daniel Clarkson, Jefferson Turner and Richard Hurst, will run for a festive season at the Garrick Theatre from Saturday 5 December 2020 – Sunday 10 January 2021. Tickets on sale now.

Capacity has been reduced to comply with COVID-19 Secure guidelines for social distancing plus robust risk mitigation. In addition to hand sanitation, face coverings and track and trace, other measures will include contactless tickets, temperature testing and the deep clean and sanitation of the theatre.

In a madcap ride through the biggest stories and best-loved characters from the wonderful world of pantomime, our dastardly double act dash from rubbing Aladdin’s lamp to roaming the golden streets of Dick Whittington’s London and making sure that Cinderella gets to the Ball. Not to mention the full-scale versions of Snow White and Sleeping Beauty which see Dan and Jeff trying to work out not only how two people can play 7 dwarves, but also which of them will make the prettiest princess!

Writer and star Daniel Clarkson said: “So excited to be able to bring Pantomime to London this Christmas. Just a few Covid challenges to solve, how will we wake up Sleeping Beauty? How can the seven dwarves bubble together with the six-person rule? How will Jack be able to sell Daisy the cow when her bottom has to be socially distanced 1 metre away from her head! But you better believe we will have this figured out by December 5. Oh yes we will!”

Producer James Seabright said: “I’m delighted to be working with Nica Burns and her brilliant team at Nimax Theatres to bring Dan and Jeff’s wonderfully funny show ‘Potted Panto’ back to the West End, offering London’s families the chance to enjoy seven classic pantomime stories in 70 minutes. We’ve reduced ticket prices since our last season at the Garrick Theatre to make this festive treat as affordable as possible – after all, everyone needs a good laugh this Christmas!”

‘Potted Panto’, which had its West End premiere at the Vaudeville in 2010 and was subsequently nominated for Best Entertainment in the Olivier Awards, is unmissable fun, whether you’re six or 106!