Mark Ludmon offers a round-up of some of the playtexts of shows that were cut short or postponed because of the theatre shutdown. 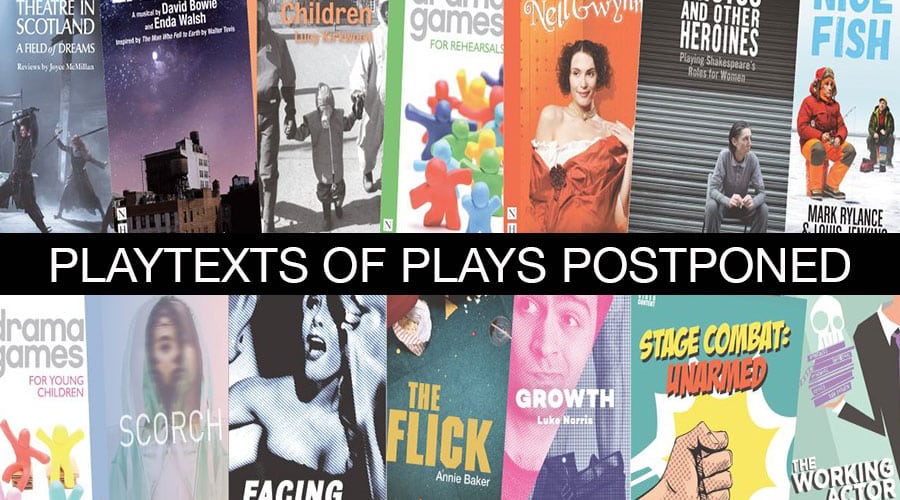 Nothing beats live theatre, and some of these productions will be back but, for now, you can explore them through their playtexts.

Playwright Alistair Beaton adapted Hans Fallada’s classic novel Alone in Berlin in a production directed by James Dacre, artistic director of Royal and Derngate in Northampton where it premiered in February. Set in Germany in 1940, it follows an ordinary couple whose small acts of resistance attract the attention of the Gestapo. With a cast led by Charlotte Emmerson, Denis Conway and Joseph Marcell, it transferred to York Theatre Royal but did not make it to Oxford Playhouse. (Methuen Drama)

Caryl Churchill’s short 2000 play, Far Away, turned out to be rather timely when it was revived at London’s Donmar Warehouse in February. Due to run to 4 April, it was directed by Lyndsey Turner with a cast including Jessica Hynes, Aisling Loftus and Simon Manyonda. Filled with a sense of foreboding, it sees reality mix with the fantastical in its unsettling depiction of a world threatened with chaos. This is a new edition tying in with the Donmar production. (Nick Hern Books)

Chris Bush draws inspiration from Marlowe, Goethe and other versions of the Faust myth for her radical retelling, Faustus: That Damned Woman. Johanna Faustus, played brilliantly by Jodie McNee under director Caroline Byrne, sells her soul to the devil but, facing eternal damnation, she opts to travel through time to change history. With theatre company Headlong, the show ran at Lyric Hammersmith in London, Birmingham Rep and Bristol Old Vic but never made it to Leeds Playhouse or Northern Stage in Newcastle upon Tyne. (Nick Hern Books)

Out of Joint’s revival of Richard Cameron’s raucous comedy, The Glee Club, opened at Cast in Doncaster in February but made it only as far as Theatr Clwyd in Mold at the start of a major tour due to run till June. It tells the story of five hard-working, hard-drinking miners and a church organist whose lives are changed by music in the early 1960s. Directed by Kate Wasserberg, it has a cast led by Bill Ward. The text may lack the show’s live music but this new edition ties in with the production. (Methuen Drama)

Performances of West End hit Harry Potter and the Cursed Child are currently suspended until 31 May but, while you may miss the magic, the texts to both parts one and two are available to read (as a “special rehearsal edition” published ahead of the 2016 world premiere). Written by JK Rowling with writer Jack Thorne and director John Tiffany, the two-part story reveals what happened to Harry and his friends as well as a new generation of trainee wizards. (Sphere) Book Tickets Here

Temi Wilkey’s beautiful debut play The High Table, directed by Daniel Bailey, was critically acclaimed when it opened at London’s Bush Theatre in February but was unable to go ahead with its transfer to The Rep in Birmingham. In this epic family drama, a woman’s plans for a perfect Nigerian wedding to her girlfriend are derailed when her parents refuse to attend and, as family secrets spill out and the rift widens, her ancestors start to show an interest. (Methuen Drama)

After playing at London’s Yard Theatre in February, Jamal Gerald’s Idol embarked on a tour but never made it to venues including Manchester’s Royal Exchange and Sheffield Theatres’ Studio. Combining African diasporic ritual, music and storytelling, it is a daring and unapologetic examination of religion, pop culture and Black representation. (Oberon Books)

Theatre company Frantic Assembly commissioned Sally Abbott’s I Think We Are Alone as part of their 25th-anniversary celebrations. It has a timely theme of finding community in the dark hours of isolation, described as a delicate and uplifting play about fragility, resilience and our need for love and forgiveness. Co-directed by Kathy Burke and Frantic Assembly’s artistic director Scott Graham, it premiered at Theatre Royal Plymouth in February before going on a UK tour that was cut short. (Nick Hern Books)

The Wardrobe Ensemble had to halt its UK tour of The Last of the Pelican Daughters, a co-production with Complicite and Northampton’s Royal and Derngate. Using their trademark irreverent humour and lovable characters, the show tackles what it means for young people to grapple with inheritance, loss and justice in this comedy about four sisters trying to come to terms with their mother’s death. See the trailer HERE. (Nick Hern Books)

Box of Tricks theatre company was stopped midway through its UK tour of Alison Carr’s The Last Quiz Night on Earth, visiting pubs and social clubs as well as theatres and arts centres. As an asteroid hurtles towards Earth, quizmaster Rav and licensee Kathy hold a quiz night for the end of the world, with some unexpected guests. (Nick Hern Books)

Tom Stoppard’s Leopoldstadt at the Wyndham’s in London was stopped mid-run although its producers say it will return later in the year. This epic but intimate story follows the Merz family through war, revolution, impoverishment, annexation and the Holocaust. Directed by Patrick Marber, it had a huge and impressive cast including Adrian Scarborough, Faye Castelow and Luke Thallon. (Faber)

The world premiere of Frances Poet’s new play, Maggie May, never quite made it to opening at Queen’s Theatre Hornchurch on 17 March – a co-production with Leeds Playhouse and Leicester’s Curve Theatre where it was due to transfer. It starred John McArdle and Eithne Brown (pictured in rehearsal). It is a warm, humorous and uplifting story about an ordinary family balancing the challenges of daily life while living with dementia. The production, directed by Jemima Levick, was infused with music so stick on Rod Stewart’s greatest hits while reading. (Nick Hern Books)