A new production company called Elliott and Harper Productions has been formed by Marianne Elliott, the Olivier and Tony Award-winning director of the National Theatre’s hugely successful productions of The Curious Incident of the Dog in the Night-Time and War Horse and producer Chris Harper.

The pair have also announced the UK premiere of their first West End show today: Simon Stephens’ Heisenberg: The Uncertainty Principle. Starring Anne-Marie Duff and Kenneth Cranham which will be directed by Marianne Elliott. Heisenberg: The Uncertainty Principle will play at the Wyndham’s Theatre from 3 October 2017 until 9 January 2018. Tickets are on sale at midday today. 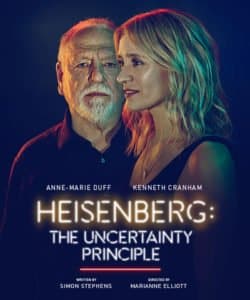 In this uncertain world, who can predict what brings people together? When two strangers meet by chance amidst the bustle of a crowded London train station, their lives are changed forever. Tony and Olivier-Award-winning playwright Simon Stephens’ Heisenberg: The Uncertainty Principle is a surprising and life-affirming new play.

In addition to Heisenberg: The Uncertainty Principle, Elliott & Harper are co-producing a new production of CS Lewis’ The Lion, the Witch and the Wardrobe with West Yorkshire Playhouse and Catherine Schreiber. Directed by Sally Cookson, it will play at the Quarry Theatre at West Yorkshire Playhouse from 29 November 2017 – 21 January 2018, with a press night on 6 December 2017. Joining Sally Cookson on the creative team are: War Horse designer, Rae Smith, sound designer Ian Dickinson, writer in the room, Adam Peck, movement director, Dan Canham and lighting designer, Bruno Poet with music by Benji Bower.