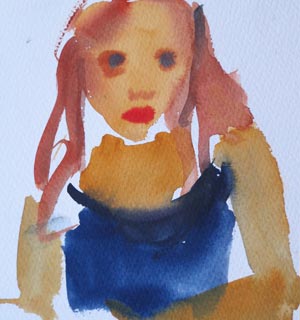 Bridlington is a  gritty yet humorous play that combines disappointment and disillusionment in a plot that follows a doomed affair in a psychiatric hospital. Showing both the therapeutic and destructive power of literature thorough one patient’s infatuation with Wuthering Heights,Hamilton weaves grisly realism with the surreal wanderings of the unstable minds of characters struggling between real and fictitious worlds.

Long-term psychiatric patient Ruth has read Wuthering Heights forty-nine times and is the star of the Therapy Unit’s poetry workshop.As she nurses her teddy-bear, Heathcliffe, in a psychiatric hospital in York, she recalls her former life in a ward in Bridlington, and her doomed affair with Bernard Whittaker, a thirty-seven year-old fellow patient from Leeds. Ten, (or is it twenty?) years earlier, Bernard is obsessed with anti-submarine warfare in WW1 and hallucinates that he is being visited by a young German submariner called Wulf, who keeps trying to persuade him to join him on his U-boat. Bernard is very tempted but is constantly drawn back by his deep attachment to the hospital cuisine.

Peter Hamilton is the Leeds-born writer known for Basildon, performed at the White Bear Theatre (2009). Hamilton’s writing spans decades and has previously explored similar themes of disillusion and mental illness in Switchboard (1997) and The Reappearance of Christ in the East End (2005). Previous credits also include Skara Brae (2007) and Danelaw (2005).

Peter says: “I wanted to write about a damaged creativity; one where painful experiences are processed by writing about them therapeutically, and compiling a fictional narrative using the elements of reality around one. Ruth is slowly spinning a pile of gold out of her past, using elements from her psychiatric hospital, muddling fantasy and reality, but helping to heal herself. From this it has grown into a play about damaged womanhood and manhood. To me Ruth is a wounded “Mother Nature”, violated by brutal western industrialism, and Bernard a damaged male “Warrior” type, limited and emasculated by petit-bourgeois society.”

The cast of Bridlington will feature Julia Tarnoky as Ruth, Richard Fish as Bernard, Steve Hunt as Eric, Antoinette Sym as Gillian, and Christopher James Barley as Alexander.