Just as the creation of the original production of Miss Saigon was documented on film, so to the current revival will have a documentary dedicated to it.

The documentary titled The Heat Is Back on is the most comprehensive look at the staging of a West End musical according to Producer Cameron Mackintosh.

Mackintosh told The Stage “Having a camera crew watch every stage of the process over a long time meant we were able to get every single element of the show. We thought it would be interesting to not just showcase Miss Saigon, but to show the kind of work that goes into a big musical.” 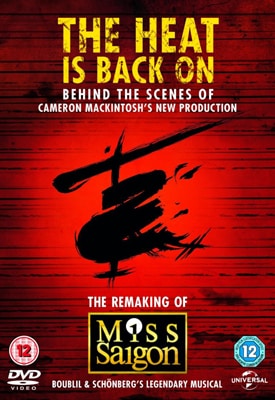 Miss Saigon has been seen by over 40 million people worldwide. From the process of casting 40 actors from 18 different countries, to the reinvention of the staging, including the famous helicopter scene, The Heat is Back On takes us on a journey through rehearsals right up to the star-studded opening night.

Featuring interviews with legendary producer Cameron Mackintosh, authors Alain Boublil and Claude-Michel Schönberg and many of the award-winning cast and creative team, this documentary is one of the most revealing documentaries ever about how a major musical production comes to life.

The Heat Is Back On can be pre-ordered from Amazon UK ahead of its release on July 6, 2015

Book Tickets For Miss Saigon at the Prince Edward Theatre.