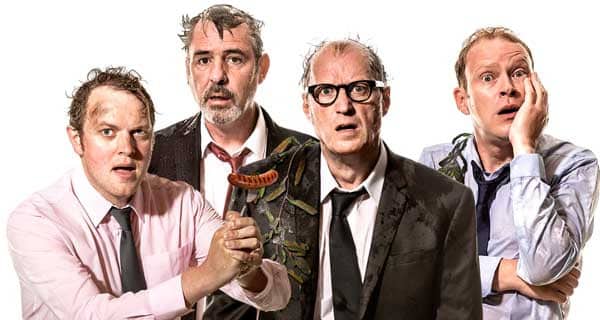 Preview performances for the hit comedy Neville’s Island begin this Friday at the Duke Of York’s Theatre and we’re delighted to bring you this new trailer for the show.

With a star-studded comedy cast featuring Adrian Edmondson (reprising his performance as Gordon from the original run at Chichester), Miles Jupp, Neil Morrissey and Robert Webb, Neville’s Island is written by Tim Firth and directed by Angus Jackson.

Shipwrecked in the Lake District, menaced by wildlife and with only a sausage between them, our unlikely explorers battle the elements and each other as corporate bonding descends into a hilarious carnival of squabbling, French cricket and cagoules.

This celebrated production of Neville’s Island marks the play’s triumphant return to the West End, 20 years after the play was first seen in London at the Apollo Theatre, where it opened in October 1994. Originally presented by the Stephen Joseph Theatre in 1992 and subsequently at Nottingham Playhouse in 1994, Neville’s Island was nominated for the Laurence Olivier Award for Best Comedy in 1995 before being adapted by Tim Firth for Yorkshire Television and presented on ITV as a TV movie in 1998 starring Timothy Spall, Martin Clunes, David Bamber and Jeff Rawle.

We hope you enjoy the new trailer.