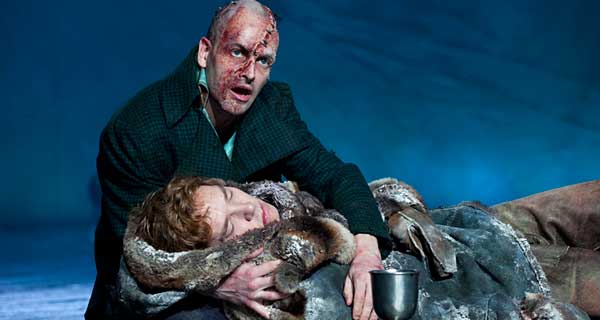 National Theatre Live’s thrilling broadcast of Frankenstein returns to cinemas for a limited time, due to unprecedented audience demand.

Danny Boyle’s award-winning production of Frankenstein returns to cinemas from 30 October, due to popular demand. Benedict Cumberbatch and Jonny Lee Miller – who jointly won the Evening Standard and Olivier Award for Best Actor – alternate the roles of Victor Frankenstein and the Creature in Nick Dear’s play, based on the novel by Mary Shelley.

Both versions of Frankenstein will be screened in a special two-part presentation in over 550 cinemas around the UK and worldwide from 30 October. The production was a sell-out hit at the National Theatre in 2011, and the broadcast has since become an international sensation, experienced by almost half a million people in cinemas around the world.

Childlike in his innocence but grotesque in form, Frankenstein’s bewildered creature is cast out into a hostile universe by his horror-struck maker. Meeting with cruelty wherever he goes, the friendless Creature, increasingly desperate and vengeful, determines to track down his creator and strike a terrifying deal.

Urgent concerns of scientific responsibility, parental neglect, cognitive development and the nature of good and evil are embedded within this thrilling and deeply disturbing classic gothic tale.

The cast of Frankenstein also includes Mark Armstrong, Naomie Harris, Karl Johnson, Daniel Millar, Andreea Padurariu, John Stahl and Lizzie Winkler. The production is designed by Mark Tildesley, with costumes by Suttirat Anne Larlarb, lighting by Bruno Poet and movement by Toby Sedgwick; the music and sound score is by Underworld, and the music associate is Alex Baranowski.

Frankenstein is suitable only for ages 15 years and above. The performance runs for 2 hours without an interval, preceded by 15 minute pre-show interviews.

For a full list of participating locations and ticket information visit www.ntlive.com