Death Drop is to star Willam and Latrice Royale and Myra Dubois when the Dragatha Christie murder-mystery re-opens at the Garrick on 19 May 2021. 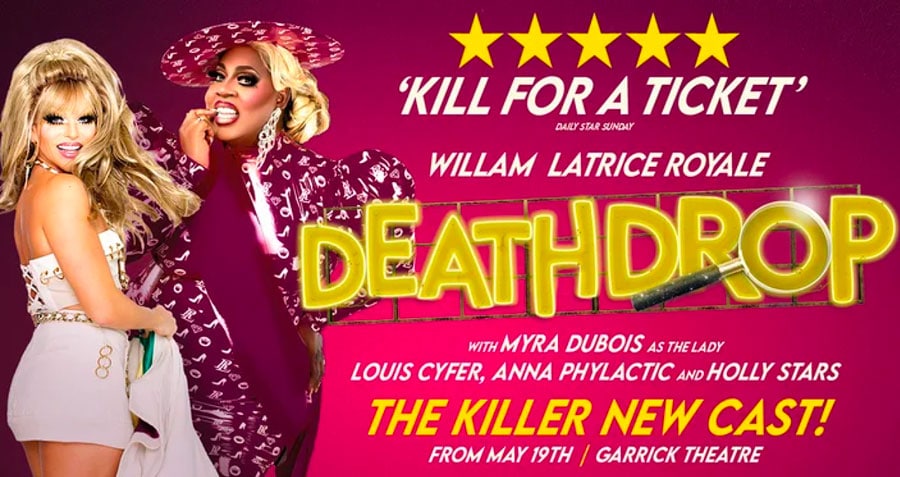 Following rave reviews in December 2020, the fabulous killer comedy and smash-hit sold-out sensation Death Drop is sashaying back into London’s West End and will return to the Garrick Theatre on Wednesday 19 May for an eight-week run until Sunday 11 July. Tickets are on sale now.

Described by Attitude as a “killer show” and ”rollicking good fun” by The Guardian, this 2021 summer residency (some of which will be socially distanced) will also feature some fabulous new casting: RuPaul’s Drag Race legends Willam and Latrice Royale will star alongside Britain’s Got Talent 2020 semi-finalist Myra Dubois, along with a full drag cast in this hilarious Dragatha Christie murder mystery – this show is like nothing you’ve seen on the West End stage before!

In what will be their West End debuts, Willam will take on the role of 80s pop sensation Shazza, alongside Latrice Royale as Summer Raines, a glamorous American weather girl living in London and Myra Dubois as The Lady.

Willam said: “I’m excited to be in the West End with my breast friend Latrice Royale in Death Drop, a spectacular drag musical murder mystery. No spoilers please (I DID IT).”

Latrice Royale continued: “I cannot WAIT to be making my debut on London’s West End in Death Drop! This is just beyond any dream I could have even conceived of when I was a boy in Compton, California. And to get to come out of an entire year in lockdown and step into such a major production is a very welcome change. It gives me hope that the world is going to get back to “normal” and when I can finally get on a stage again, I’m gonna tear it up! I miss connecting with a live audience so much, and getting to do it with my good Judy, Willam, makes it even more special.”

Myra Dubois added: “Rejoice! I, Myra DuBois (off the telly), am making my long-anticipated West End debut! People forget that as well as a globally revered singer, poet, muse, wellness facilitator, energy worker and an empath; I’m also an actress. Award-winning, actually. What an honour it is to be able to swoop in and save this little show. I can’t wait to meet my supporting cast.”

LoUis CYfer, Anna Phylactic and Holly Stars – who all performed in the show last year – will return to reprise their co-starring roles.

It’s 1991 and a gaggle of guests gathers on Tuck Island for a soirée like no other. The tension rises as the outrageous guests reveal their suspicious and sordid pasts, and one by one they sashay away until at the last, nerve-shredding, side-splitting moment the surviving guests find out whodunnit!

This rampant, raucous, ridiculous romp of a murder mystery serves up all the drama, comedy, twists, and turns you’ll ever need! Read our review of Death Drop here.

TuckShop is the UK’s only specialist theatre production company devoted all things drag. In 2019 they presented Cinderella starring Baga Chipz, the UK’s first-ever all drag pantomime in the West End which sold out its run. They also produce drag events across the country and are the UK’s largest merchandise retailer for drag performers.

TuckShop Creative Director and Producer Christopher D. Clegg said: “To reopen the West End, not once, but twice with Death Drop is so exciting. In the short run, we had in December our audiences were having so many much-needed laughs, and we can’t wait to slay you all once more. To bring the history-making first-ever Drag playback to the Garrick Theatre once again – for an even longer run – with some of the best, most talented, and hilarious drag Kings and Queens is an honour!”

The capacity at the Garrick Theatre has been reduced to comply with COVID-19 Secure guidelines for social distancing with robust risk mitigation in place. In addition to hand sanitation, face coverings and track and trace, other measures will include contactless tickets, temperature testing and the deep clean and sanitation of the theatre.