There’s nothing more to be said about this horrendous, dismal year. Theatre has done its utmost to survive, and there are times when the government seem to refuse to give live entertainment a break. However, there is a determination to survive, and theatre moved online, found new innovation, and recorded shows became available to millions more people. So here is my top ten of the year, a mixture of live, recorded and crossover theatre that keep my hope and determination alive.

Death of England/Death of England: Delroy. (National Theatre)
Striding the pandemic like a colossus, Roy Williams and Clint Dyer’s two-part play, (The first, Death of England, premiered early this year, live in the Dorfman, the second, Delroy, closed on its opening night due to lockdown two, but was streamed via their YouTube channel), has been forged from experience and observation to create two monologues that encapsulate English attitudes, fragility, bigotry and stoicism when faced with the huge issues of our time. With forensic detail, they make sure we don’t turn away from injustice, yet they are forged with fires of passion, humour and emotion.

In the first, we met Michael, who was reeling from the death of his racist father, then from Delroy, Michael’s black best friend. Both pieces chart Brexit, football, English pride and defeats, and we view England through their masculinity. On his way to the hospital where his girlfriend, (Michael’s sister), is giving birth to their daughter, Delroy is stopped, searched and put into a police cell. Unable to control his anger, we first meet him having an electronic tag fitted and he takes us through the events until arriving at the first national lockdown. Covering Black Lives Matter and the events of the summer, these passionate plays were forged in the crucible of our year and superbly performed by Ralf Spall and Michael Balogun respectively.

Uncle Vanya (Harold Pinter Theatre)
I didn’t get to review it, but Ian Rickson’s stunning production of Connor McPherson’s free translation brought Chekov to life. I fond it hard to forgive bad Chekhov, but this was the best Chekhov, funny and poignant, urgent and relevant. The cast were superb, particularly Toby Jones as Vanya in one of the performances of the year, Ricard Armitage a frustratingly superb Dr. Astrov, and Aimee Lee Wood almost stealing the show as goofy and loveable Sonya. The good news is it has been filmed and will be screened on BBC4 over the festive season. Unmissable! Read my review.

Nora: A Doll’s House. (Young Vic)
This was set to be a year of Ibsen and Chekov, but COVID-19 put paid to that. Just before lockdown audiences are being treated to this radical, stunning reworking of the play by Stef Smith. Whilst the integrity of Ibsen’s structure and themes remain, Smith has created three-time lines that each feel like a significant moment for women, 1918, the year women got the vote, 1968, the year the pill became commonplace and abortion legalised, and 2018 and the scale of the #MeToo movement. There are three Nora’s, decades and a century apart, three Christine’s, three Thomas’s (Torvald) and so on. Yet Smith’s writing was crystal clear, and the ensemble did terrific justice to a script that thrummed with relevance and power- what has changed for women and what has stayed the same? Read my review.

On Blueberry Hill (Trafalgar Studios)
Sebastian Barry is one of Ireland’s finest writers; author of many a prize-winning novel. In response to his son coming out to him, Barry gifted him, (and us), the beautiful novel Days Without End, a novel of the triumph, against all odds, of gay love. His characters are human, flawed and often crushed by their own insecurities and upbringing, and he writes for the stage intermittently, and perhaps not often enough! On Blueberry Hill features two men, Christy and PJ, who share a prison cell, who are connected by death under the most terrible circumstances, and who have love for each other. Though this is not an outright LGBTQ play, it is a triumph of continuing reconciliation and understanding. The last thing I saw before lockdown. Read my review

Talking Heads: Bed Among the Lintels. (Bridge Theatre)
To one of the first things, I saw when the theatre was allowed to reopen in limited, socially distanced form. The Bridge Theatre did an excellent job of providing a safe environment and staged eight of the Twelve Talking Heads restaged by Nicholas Hytner over the summer. (See below.) I selected this one because it’s one of my favourites of Bennett’s series, and the exquisite Lesly Manville made the piece her own. 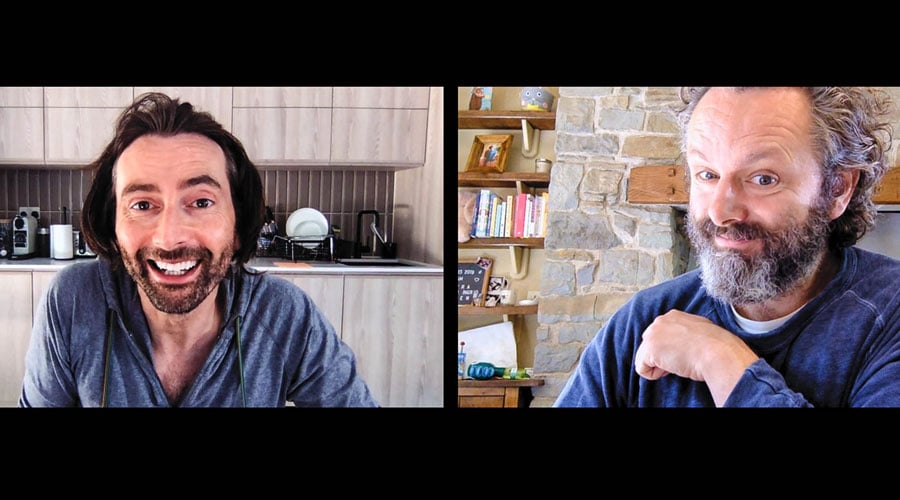 Staged, (BBC)
One of the first responses and a genuine lockdown treat. Michael Sheen and David Tennant played versions of themselves, (I suspect only their loved ones will know how accurate this is), who were due to put on a play in the West End before Covid19 put everything on hold. The play’s director, Simon Evans, is worried that his big break will pass him by, and he persuades the actors to carry on rehearsing Six Characters in Search of an Author online.

It is an absolute joy, mainly because of the chemistry between the two leads, who not only get on with each other but are so willing to send themselves up and revel in self-deprecation. Sheen is all beard and wild hair, distracted by the slightest noise, “The birds have returned to Port Talbot”, a hermit in his kitchen and he comes across as an aggressive Paddington Bear, with a fixed stare that freezes the screen with disapproval. A wonderful range of guest stars enlivened each episode, and a second series is imminent! Unmissable! Read my review here.

Talking Heads. (BBC)
Another triumph for the BBC, with the revisiting, recasting and revelation that Alan Bennett’s classics have survived the test of time, and with two brand new monologues that gave us Bennett fans much hope. What was wonderful was how some of the weaker pieces were discovered and given new life, particularly Nights in the Garden of Spain, beautifully performed by Tamsin Grieg, and Maxine Peake gave a cheeky edge to Miss Fozzard Finds Her Feet– both went on to perform them at the Bridge. But it was the classics, my favourites, that shone with new light, especially Martin Freeman in Chip in The Sugar, and Lesley Manville in Bed Among the Lentels.

Declan (Mouthpiece) (Traverse Theatre)
Huge congratulations to the Traverse Theatre for programming their new space, Traverse 3, an online festival that will run throughout the year. Declan, adapted from Kieran Hurley’s extraordinary Mouthpiece, seen at the Traverse last summer, is my pick. Rarely have I had such a visceral, emotional response to a play as I did being in the audience of Mouthpiece. Beginning at Salisbury Crags, a middle-aged woman steps forward to fall to her death, but she is saved by a teenage boy. From that moment Libby and Declan form a friendship, fragile at first, but growing as Declan begins to trust her, and he begins to experience art and glimpses of another life. Libby is a failed writer, and she spots an opportunity in the despair and chaos of Declan’s life, in his artwork and stories, and she begins to appropriate his story and her star begins to rise as his life falls apart.
Told now almost exclusively from Declan’s point of view, Lorn McDonald’s superb direction took us to the locations, and the heart, of the play. Read my review.

Little Wars. (Ginger Quiff Media.)
A wonderful rehearsed reading of Steven Carl McCasland’s extraordinary play. Don’t be put off either by the words “rehearsed reading”, with a cast of this calibre the script is alive and vibrant. On the eve of the fall of France in 1940, Gertrude Stein and her girlfriend Alice Toklas hold a dinner party for guests Lillian Hellman, Dorothy Parker and Agatha Christie. This is a dinner party gathering to die for! But, mouth-watering as all this is, we are aware from the outset that war is looming when freedom fighter Muriel Gardner arrives to arrange safe passage for three Jewish refugees that Stein and Toklas are supporting. Deciding to stay the night, Gardner adopts a pseudonym and tells the guest she is a psychiatrist, which the writers’ sense may not be the full truth. The cast, including Linda Bassett and Juliet Stevenson, made this the production I want to see on stage one day!
Read my review

Rose (Hope Mill Theatre)
“She laughed. And then she blew her nose. She had a cold. The bullet struck her forehead. It caught her in the middle of a thought. She was nine. I’m sitting shivah. You say shivah for the dead.”
It’s a bold, attention-grabbing opening to Martin Sherman’s powerful one-woman monologue Rose. His portrait of a strong Jewish woman, who recounts her life from war-devastated Europe to achieving the American Dream, is a tour-de-force for an actress, demanding, and a full- length play, no seventy-minute interval free here. And in Maureen Lipman, filmed on the stage of the Hope Mill Theatre, the script has a perfect interpreter, holding us close in Rose’s story, almost daring us to look away in the darkest moment, embracing us seconds later, with wonderful self-deprecating humour. There is a subtlety to the performance, the production, (gentle sound effects and music, with some projections), gently directed by Scott Le Crass, avoids melodrama and is all the more mesmerising for it. Another I would love to see performed live. Read my review

There is so much more of course, and streaming has now become firmly part of the theatre, and, with a huge audience reach, is unlikely to go away! National Theatre at Home was a lifeline and is now the new, superb streaming service from the venue. And Nick Hern Books kept writers and readers engaged with each other through excellent play readings and Q and A’s, superb new publications, and witty tweets! It’s been hard to remember sometimes that the priority is to stay safe and well and to keep going till we can gather together again. We have to believe things will get better, and I send every best wish for 2021.