Paul Taylor-Mills is delighted to announce MT Fest UK, a two-week festival of new musical theatre at The Other Palace from Monday 11 to Saturday 23 February 2019.

MT Fest UK will present new work by both emerging and established writers, as well as programming talks and concerts from some of the most celebrated performers, writers and producers currently working in musical theatre. All tickets to events and performances will be between £10-15.

At the centre of the festival will be a Taster Menu series of eight new musicals, each presented as a 45-minute semi-staged sharing in the studio at The Other Palace. The musicals will range from brand new commissions from Paul Taylor-Mills, to re-worked Broadway shows and brand-new musicals that Taylor-Mills has developed in his role as Affiliate Producer at The Other Palace. Beyond the Taster Menu series, the festival will also feature a selection of intimate talks, performances and one-off events throughout the day, including:

Paul Taylor-Mills said today: “Over the years I’ve been fortunate to meet writers and composers from all over the world, and this festival is about putting their work front and centre and celebrating the process of creating new musicals. It’s vital to ensure the musicals seen on our stages in years to come remain relevant, entertaining and boundary-pushing, and this means giving writers the opportunity to put their work in front of audiences. So MT Fest UK will open the doors to the process of creating new musicals, allowing audiences to see pieces from across the world at various stages in their journeys. Come play, discover, learn – you never know where these musicals may end up!” 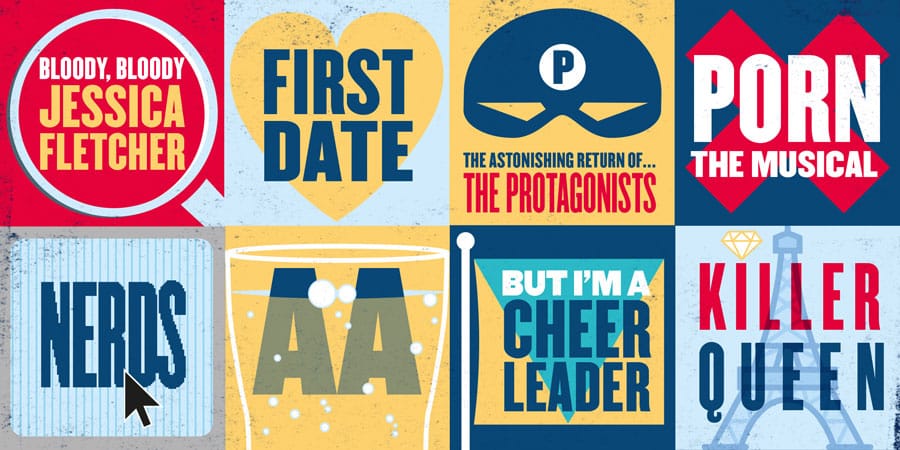 Announced today are the eight headline musicals that will form the Taster Menu series:

AA is a hilarious and tender musical from Olivier Award-winning composer Richard Thomas(Jerry Springer the Opera, Anna Nicole), set within an Alcoholics Anonymous meeting. Music and Lyrics by Richard Thomas.

Nerds is a Musical Dot-Comedy, telling the story of the rise of computer technology and the two men that made it all possible: Bill Gates and Steve Jobs. Music by Hal Goldberg and Book and Lyrics by Jordan Allen-Dutton & Erik Weiner.

First Date sees a blind-date newbie and a serial-dater meet for a casual drink that turns into a hilarious high-stakes dinner. Unfolding in real time, will this first date be their last, or will they see something special before the check arrives? Book by Austin Winsberg and Music and Lyrics by Alan Zachary & Michael Weiner.

But I’m a Cheerleader is the story of Megan, an all-American high school cheerleader who seems to have it all. But her friends and family suspect Megan is a lesbian, so send her packing to the ‘True Directions’ rehabilitation camp to put her on the straight and narrow. Hilarious, cheeky and one of a kind, this is a quirky coming-of-age comedy about sexual awakening and staying true to yourself. Book and Lyrics by Bill Augustin and Music by Andrew Abrams.

Bloody Bloody Jessica Fletcher is a musical parody as authorized as a novelist at a crime scene. There’s been another gruesome murder in Cabot Cove! Should we call the police? FBI? CSI? Nope. We have a geriatric novelist on the case. Book by Kevin Zak, Josh Lamon & Phillip Taratula and Music and Lyrics by Keith Varney. Additional Music and Lyrics by Josh Lamon.

The Astonishing Return of… The Protagonists follows a group of once mighty superheroes battling the forces of evil. But twenty years later, they find themselves battling the forces of thinning hair and menopause. When an old nemesis re-emerges with a sinister plan, can the former super-friends pull it together to save the world again? Book and Lyrics by Kevin Del Aguila and Music by Michael Shaieb.

Killer Queen combines rap and RnB with 18th century France to retell a story that sparked a revolution. When Marie Antoinette married King Louis, her reputation was already tarnished by gossip. But when she is implicated in a crime to defraud the crown jewellers of a diamond necklace, it is not just her reputation at stake, but the monarchy and France itself. Music and Lyrics by Tasha Taylor Johnson, Jack McManus & Jonny Wright and Book by Jonny Wright.