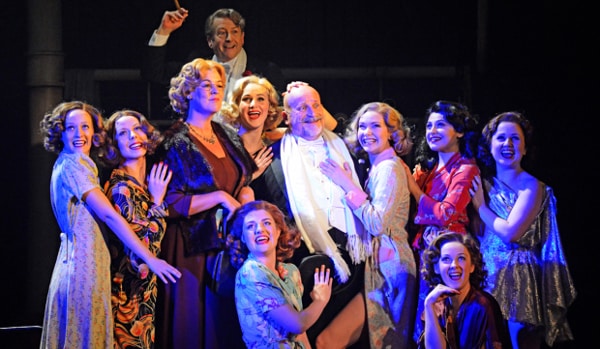 Mrs Henderson Presents will star  Tracie Bennett and Ian Bartholemew playing Mrs Henderson and Vivian Van Damm and Emma Williams playing Maureen. We believe that both Bennett and Williams will reprise their roles in the West End. Other casting will be announced shortly.

It’s London, 1937, and recently-widowed eccentric, Laura Henderson, is looking for a way of spending her time and money when her attention falls on a run-down former cinema in Great Windmill Street. Hiring feisty impresario Vivian Van Damm to look after the newly renovated Windmill Theatre, the improbable duo present a bill of non-stop variety acts. But as war looms something more is required to boost morale and box office… When Mrs Henderson comes up with the idea of The Windmill Girls – glamorous young women posing as nude statues – audiences flock. And as the Blitz hits London, The Windmill provides a refuge for all, boasting the spirit-raising slogan “We Never Close”.

Based on the film Mrs Henderson Presents – original screenplay by Martin Sherman, the musical has a book and is directed by the multi-award winning Terry Johnson. Lyrics are by the Oscar, Tony and Golden Globe winning Don Black with music by Oscar nominated George Fenton and Simon Chamberlain, who both collaborated on the original film. It is choreographed by Andrew Wright, has set design by Tim Shortall, costume design by Paul Wills and lighting design by Ben Ormerod. Wig, hair and make-up design is by Richard Mawbey, orchestrations are by Larry Blank with musical supervision by Mike Dixon.

Could 2016 an awards year dominated by the girls, with Imelda Staunton and Gypsy hot favourites in the revival categories and now Mrs H in the Best New Musical categories?