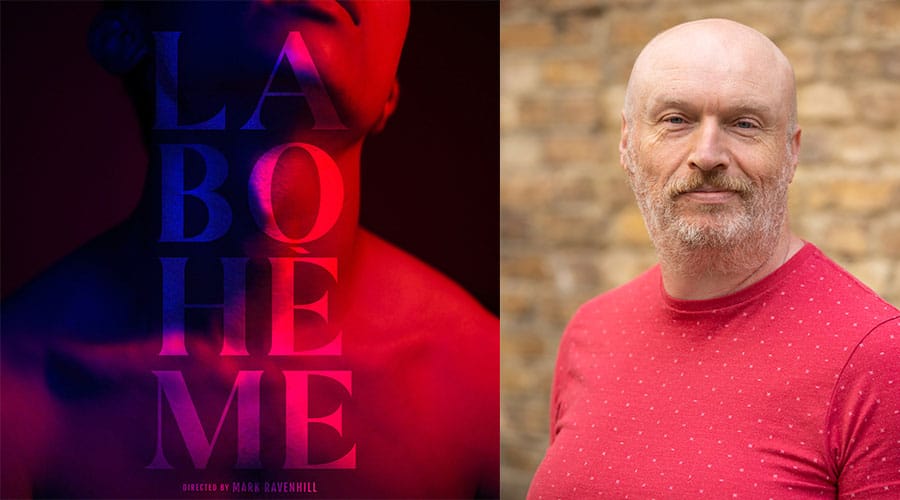 Mark Ravenhill, Co-Artistic Director of The King’s Head Theatre, will direct a contemporary queer reinvention of Puccini’s classic opera La Boheme, opening at the world-renowned Islington pub theatre’s stage from 26 April and playing until 28 May.

With Puccini’s score and a new English libretto originally conceived by David Eaton and Adam Spreadbury-Maher with additional material by Philip Lee, and with Musical Direction from David Eaton, this classic tale of love and loss amongst a community of struggling artists returns to the King’s Head Theatre in a new version which relocates the story to contemporary London. Full casting will be announced shortly.

Penniless writer Rudolfo struggles to monetise his online writing but a Grindr hookup with a Liberty perfume salesman- known to his friends as Mimi -leads to unexpected blossoming of romantic passion.  Meanwhile Rudolfo’s flatmate, Marcello pursues an on/off relationship with sometime model Musetta who is torn between the idealism of loving an artist and the material possibilities offered by a hedge fund manager.  As a year passes from one Christmas to the next, the four friends struggle to reconcile love with artistic aspiration and the need to pay the bills.

Puccini’s story has been constantly reinvented since its premiere in 1896 most notably with the Broadway musical Rent.  A previous production for Opera Up Close enjoyed a successful run at the King’s Head Theatre, and received an Olivier award. Subsequently, in 2018 another incarnation of La Boheme from the King’s Head Theatre West End season was nominated for Best New Opera at the Oliviers.

Mark Ravenhill explains: “Our version of La Bohème is the story of a group of friends who started partying in the 1990s.  As they reach middle age, they are faced with the possibility that now may be the time to sell out and settle down.  But romantic passion, sexual desire and the hedonistic pleasures of partying remain as strong as ever.  It’s exciting to honour the overwhelming romantic beauty of Puccini’s score with his eye for telling social detail in this new version”.

Musical Director David Eaton continues, “It is really exciting to be returning to the King’s Head to work on this new production of La Bohème with Mark Ravenhill.  I’m always looking for ways to bring opera to new audiences and to reframe the outdated tropes and narratives that can make Opera feel elitist and alienating.  The King’s Head is the perfect space to come and experience something new – up close, personal and modern, far from the old-fashioned conventions of the Opera House.  There are some great singers on board and an inspiring Director – I can’t wait to get started!”

The King’s Head Theatre was established in 1970. Passionate about great theatre, it is known for its challenging work and support of early career artists.

The King’s Head is committed to fighting prejudice through the work it stages, and the artists and staff it works with. The team believes in fair pay for all on the fringe and create accessible routes for early career artists to stage their work – work they are passionate about. In 2022, subject to a fundraising campaign, the King’s Head Theatre will move into a custom-built space in the heart of Islington Square, directly behind its current home securing the future of the venue for generations to come.

Darren Murphy is an Olivier Award Nominated producer and writer who in 2014 founded his production company Making Productions. He has gone on to produce bold new writing and existing work in new and exciting ways to engage and entertain audiences. Combining newly discovered talent with experienced collaborators, partner organisations and other producers, the aim is to extend the scope of creativity in the performing arts. Darren is passionate about exploring relevant and current work for education and community organisations for the betterment of all and is unique in this practice by championing Women, BAME and LGBT+ creatives.