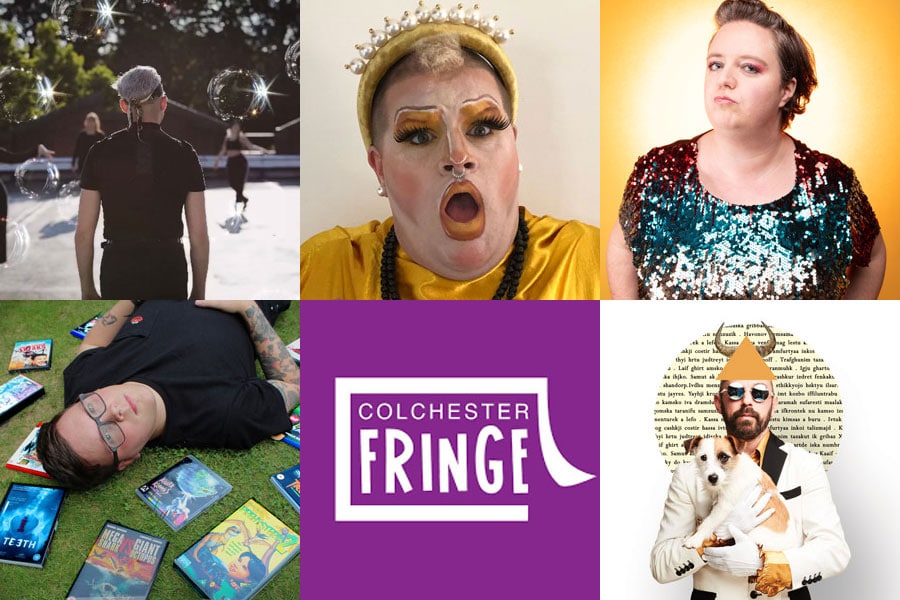 The first Colchester Fringe Festival proved to be a huge success, filling venues across the town with theatre, comedy, family shows and much more. I usually focus on theatre, and as I was presenting my own show at the festival, I was limited for time but I aimed to see an eclectic range as possible.

Luke Poulton’s Bad Movies is an excellent show, full of affection for really terrible movies, and introducing me to some “classics” I now want to see- I mean Shark Exorcist is crying out for a viewing! There are so many horrors I never knew about! A thoroughly entertaining introduction to the DVD bargain basement! (4 stars)

Every Thing I Know I Learned from Eurovision by Jo Fletcher Cross was huge fun, and dealt with the ray of glitter ball light that the song contest can shine into a difficult upbringing! There are many strong sequences, but then a slightly over long “interval entertainment” by kazoo playing Lee Ashcroft began to drag the pace down. It’s a good idea but needs more refinement, and the piece began to feel like a work in progress. There is loads of potential here though, and the Eurovision lovers in the audience put me to shame! (3 Stars)

I had similar feelings about Drag Bingo with host Shar Cooterie. This was an informal, fun hour of bingo, but felt messy, and inviting the audience to message questions which the host would answer added a nice line of jeopardy, but felt like padding. Songs could have been added, and the bingo calling could have been even filthier, but there was much to enjoy. (3 stars)

There were some great family shows, and two magic presentations really stood out. Saska: Bull in A China Shop, was great fun, his image being of a foreign magician, (origin of birth, difficult to pin down!), bordering on incompetent, who actually pulls off some pretty impressive magic tricks. Great interaction with the young members of the audience, and enough cheesy gags to please the parents! (4 stars)

Entrée, by Jose Pedro Fortuna, (Portugal), was a delightful discovery. Again, his magic act is one of a potentially incompetent magician, but he adds a superb series of slapstick, working well with all the props and building up to an announcement we never hear! Excellent comic timing throughout, a master class in how to hold an audience from young, interactive, commentators to delighted adults! (4 stars)

Wonderful to welcome a new play written and directed by one of the “young fringers”, Jaz Skingle. Ghost Therapy is set in the clinic of Dr. Soul, who helps those in the after life with their problems, and features a range of “clients”. The gag rate is very high, and though the timing was a little slow on the first performance, the play built up to an hilarious climax when Dr. Soul has to face her own phobias, with Ewan Purser stealing the show as her assistant Ryan. A very funny, well-structured play, with a hauntingly funny Spectre by Emma Pallet. (3 stars)

Outstanding work from Radio Vision, who presented two short audio plays, cleverly presented as a visual experience. Both plays written by Griff Scott, the first, Jumbo, was an amusing story based around the Colchester landmark, a Victorian water tower known locally as Jumbo. But it’s the second play, Number One North Sea, that really was a highlight of the Fringe. Beautifully performed by all, it was a moving, original story that peeled off its layers effectively to twist and surprise the audience. It’s a work that deserves a future. (5 stars)

Back to the Roaring Twenties was an amazing dance piece from Movement Space. Whilst there wasn’t a strong narrative regarding the roaring twenties of 2021 and 1921, it was present in the outstanding soundtrack and the superb choreography of Jonathan Prestley and the high-octane energy of his dancers. (4 stars)

The Fringe was a wonderful experience, and proved that there is an appetite for this time of festival in the town. Here’s to next year, and the possibility of the event growing!