Wendi Peters, Kimberley Walsh and Matthew Kelly are to join Jay McGuiness in Big The musical at the Dominion Theatre. 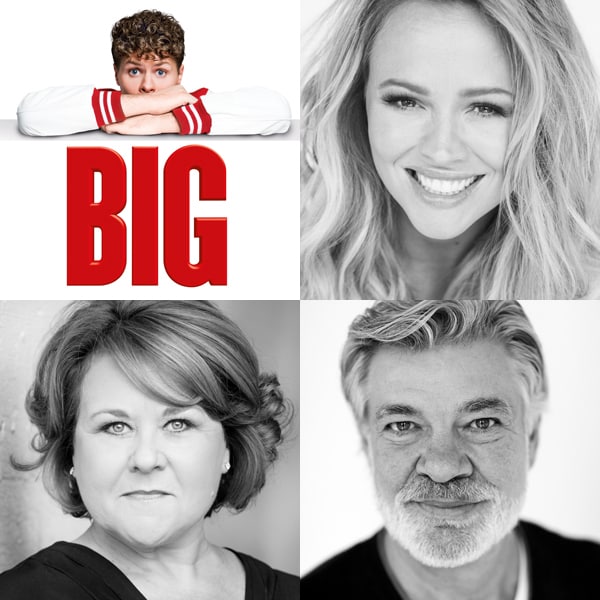 Producers have also released a video of Jay and Kimberley singing We’re Gonna Be Fine which can be viewed below.

BIG is a joyous, heart-warming musical about 12-year-old Josh Baskin who longs to be big.  When a mysterious Zoltar machine grants his wish, he finds himself trapped inside an adult’s body and he is forced to live and work in a grown-up world, but his childlike innocence has a transforming effect on the adults he encounters.

Wendi Peters is best known for her role as Cilla Battersby Brown in Coronation Street – a role that she played for over four years, returning briefly in 2014.  Wendi plays the recurring character Cook Jenkins in Hetty Feather (BBC) and her other television credits include Queen Shania in Hacker Time (BBC), Kelly in Sadie J (BBC), Marion in Crime Stories (ITV) and ‘Podger’ Pam Jolly in Bad Girls (ITV).  Theatre credits include Princess Puffer in The Mystery of Edwin Drood (Arts Theatre, West End), Grumpy Old Women Live 2 – Chin up Britain (National Tour and Novello Theatre, West End), Vagina Monologues (National Tour), and Martha Watson in White Christmas (Dominion Theatre). Most recently, Wendi could be seen in the National Tours of Salad Days, Quartet, Wonderland and Oh What a Lovely War and as Dorothy Needham in the world premiere of Hatched ‘n’ Dispatched at Park Theatre, London.

Kimberley Walsh rose to prominence in the record-breaking girl band Girls Aloud. During their 10 years together, the group achieved twenty consecutive top ten singles in the UK, including four number ones, with over 4.3 million single sales and 4 million albums sold in the UK alone.  In 2012, Kimberley was runner up in Strictly Come Dancing.  As an actress, Kimberley has starred as series regular Rebecca in Disney’s The Lodge, played Claire Butterworth in the second series of Channel 4’s Ackley Bridge, and appeared in children’s movies Horrid Henry and All-Stars.  In the West End, she starred as Princess Fiona in Shrek The Musical, Jovie in Elf the Musical, and joined Denise Van Outen for a week-long run at Cadogan Hall in Sweet Charity.

Matthew Kelly’s many television credits include the award-winning thriller Cold Blood, Benidorm, Bleak House and Moving On, although he is probably best known for presenting You Bet! and Stars in their Eyes.  His West End appearances include the original Stanley in Funny Peculiar (a role he had created at the Liverpool Everyman), Waiting For Godot with Ian McKellan and Roger Rees, Tim Firth’s play Sign of the Times, the musical Lend Me A Tenor! and as Lennie in the Birmingham Repertory Theatre’s production of Of Mice and Men at the Savoy Theatre, for which he won the Olivier Award for Best Actor.  His other most recent theatre credits include W.H. Auden/Fitz in the first revival of Alan Bennett’s The Habit of Art, Pride & Prejudice (Regents Park Theatre & UK Tour), The Jew Of Malta, Volpone and Love’s Sacrifice for the RSC, TOAST (Park Theatre & 59E59 in New York), the musicals Spamalot and Legally Blonde (National Tours), Troilus and Cressida (Shakespeare’s Globe) and Who’s Afraid of Virginia Woolf? (Trafalgar Studios, London).

Jay McGuiness originated the role of Josh Baskin at the Theatre Royal Plymouth in 2016.  Jay came to fame as part of the successful boy band The Wanted.  His fame widened when he won Strictly Come Dancing in 2015 with professional dancer Aliona Vilani.  He and fellow bandmate Siva won last year’s celebrity version of Channel 4’s Hunted, raising money for Stand Up To Cancer.  Jay is also a regular contributor to the BBC’s The One Show and is currently starring in Rip It Up – The 60’s in London’s West End until June.

BOOK TICKETS FOR BIG AT THE DOMINION THEATRE