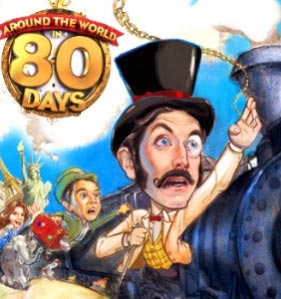 A new stage production of Jules Verne’s classic 1873 novel, Around the World in 80 Days, directed by Lucy Bailey, will open at the St. James Theatre this Christmas, just a stone’s throw from the Reform Club on Pall Mall where Phileas Fogg’s adventure begins. In an adaptation by playwright Laura Eason, a writer on hit Netflix series House of Cards, the production will run for eight weeks from 26 November 2015 – 16 January 2016, with casting will be announced shortly.

Pack your bags for a trip Around the World in 80 Days. The majestically mysterious, fabulously wealthy Phileas Fogg wagers his life’s fortune that he can circumnavigate the globe in just eighty days. Join Fogg and his loyal valet, Passepartout, as they voyage from the misty alleys of Victorian London to the exotic subcontinent and the wild west in a race against the clock. A cast of eight play more than 100 characters in this high-spirited, imagination-filled escapade for all the family.

Lucy Bailey commented “I remember Jules Verne’s book as delightfully eccentric. This new stage version is off the wall, refreshingly unconventional, and celebrates our world – what could be better! It’s a chase movie, a love story, and a heroic quest – all in one.”

Tickets are now on sale for Around The World in 80 Days through the St James Theatre.