A 19-strong cast led by Jessica Martin has been announced for the Union Theatre’s revival of Lionel Bart’s epic wartime musical, Blitz!. 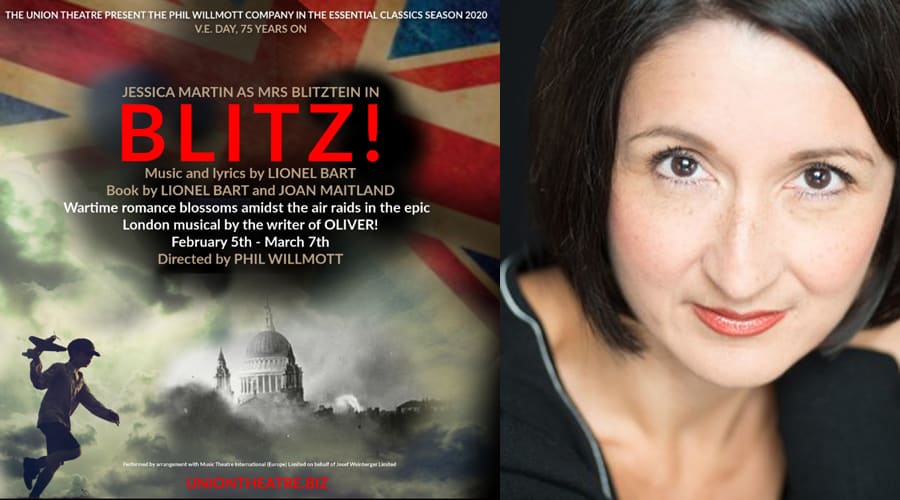 The new production, directed by Phil Willmott, will run at the Union Theatre, London from 5 February to 7 March 2020 as part of this year’s commemoration of the 75th anniversary of VE Day.

First staged in 1962 two years after Bart’s mega-hit Oliver!, Blitz is a celebration of London’s working-class spirit as the Nazis rained down bombs on Britain’s cities. It follows the story of the redoubtable Mrs Blitztein, played by Jessica Martin, who is loved and feared by her neighbours as the “Queen of Petticoat Lane” – a character based on Bart’s mother.

Initially, determined that her kids will not marry outside the Jewish faith, Mrs Blitztein is forced to reconsider as neighbourhood feuds take an unexpected turn in the nightly scrabble for the air raid shelters.

With Bart’s music and lyrics, you are never more than 10 minutes away from a cockney knees-up or a haunting ballad. Bart also wrote the musical’s book with Joan Maitland. This production features choreography by Daniel Maguire with musical direction by Rosa Lennox. The set is being designed by Reuben Speed.

The first production of Blitz! was one of the most spectacular and expensive musicals ever staged and, although it was a hit, producers have been intimidated by the cost of a remount ever since. This production is the first attempt to reframe Blitz! as a chamber piece, with the intimacy of the Union Theatre pulling the characters and relationships into sharper focus than before, recreating the crowded claustrophobia of the air raid shelter and the bustle of London’s alleyways.

From West End leading lady to one-woman cabaret shows, Martin has performed all over London and the rest of the UK in productions including musicals Me and My Girl, Elf, Spamalot, and Mack and Mabel. In her 30-year career, she has performed in theatre, comedy, television and radio and received critical acclaim for her one-woman show Sunset Bitch at Waterloo East Theatre in London.

This rare revival of Blitz! is one of three shows being staged at the Union Theatre in 2020 to explore the role of the British in World War Two. It is part of the Phil Willmott Company’s Essential Classics season, now in its fourth year.

Otherwise, please click here to continue to the Union Theatre...
x
Send this to a friend