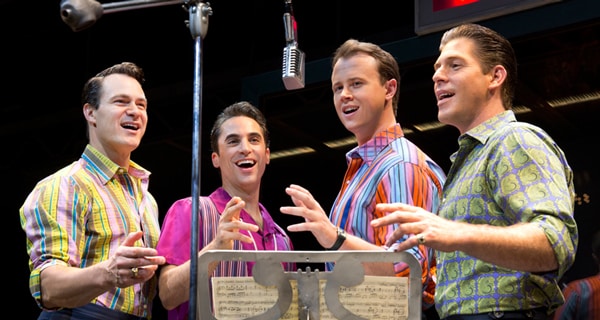 The winner of 55 awards including the Tony Award for Best Musical, the sensational Jersey Boys recounts how four rough and ready kids became one of the greatest pop bands of all time.

Through ingenious storytelling told from four points of view and iconic songs, discover the true story of Frankie Valli and the Four Seasons as they battle the mob, the industry and themselves to make music history.

An outstanding cast brings the unique sound of Frankie Valli and the Four Seasons to life. A true Broadway treasure, Jersey Boys showcases all the very best hits from this beloved band, including ‘Oh What a Night’, ‘Walk Like a Man’, ‘Beggin’’ and ‘Sherry’.

Playing at New York’s August Wilson Theater, whether you’re a devoted fan or want to see for yourself why these Hall-of-Famers have sold over 100 million albums, Jersey Boys will blow you away.