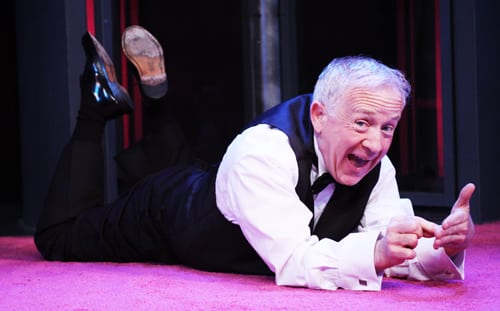 It has to be the hottest pink ticket in town folks! As Jordan prepares for the opening of his one man show, can Phil Matthews get him to reveal even more?

If you aren’t aware of the name Leslie Jordan by now – one has to pose the question – where have you been hiding?

He may be just 4 foot 11, but wherever this pintsized power house skips, boy does he make himself heard.

A true comedy star of American television and stage, Jordan eventually made his name in the sitcom Will & Grace starring as camp southern Republican Beverly Leslie. It was a show stealing role that won him an Emmy. Surely the penny is on its second bounce by now?

The 55 year old has travelled across the pond and has been in the Capital on a media mission to promote his one man show – Lesley Jordan – My Trip Down the Pink Carpet – which opens tonight at London’s Apollo Theatre. We’re told to expect “an outrageous tell-all that weaves together a hilarious collection of true life stories”.

It is a show that wowed audiences in modest venues off-Broadway and forty five cities across the States. The decision to seize the Apollo on Shaftesbury Avenue for a month, is at the very least a brave one. Having said that, there’s a twinkle in Jordan’s eye that says he trusts his team, and more importantly, his material. If preview squealers and talk of standing ovations are anything to go by, we’re in for a real treat.

I’ve been invited to Jordan’s hotel for afternoon tea in the run up. ‘How camp’ I think, skimming the press email – hell yeah, you can count me in. Though naïve I certainly am not and of course I’m expecting to be just a small part of his arduous day, or rather fortnight, of interviews. The guy has 700 seats a night to fill, the pressure is on, I get it.

But surely anyone would be jaded by this gruelling schedule? “Ooh it’s my favourite subject – myself,” quips Jordan as we sit. I search for his tongue being planted firmly in his cheek, but Jordan is off with his first anecdote like a race horse, so I’m barely given the chance. In the back of my head I hear the words of Marlon Brando: ‘An actor’s a guy who, if you ain’t talking about him, ain’t listening’.

Jordan has taken pleasure pouring his soul out to the media, and bearing in mind he’s a self-confessed open book, I do wonder what is left to reveal. But whatever, I could listen to him gush on for hours, he’s undeniably irresistible.

“I decided I wanted to be a jocky when I was 19,” explains Jordan when asked about his early career choices. “I had the ability, but I don’t have the heart. I’m a big sissy!” 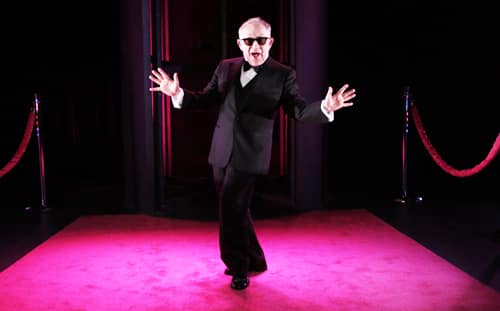 Realising this was a valiant vocation that didn’t suit his character, Jordan returned to his hometown at 26 years old to find one that did. After toying with the idea of journalism, his buddies urged him to take an ‘Intro to Theatre’ class. It was a moment that would change his life forever.

The theatre course introduced him to improvisation and it wasn’t long before the room was filled with laugher. “All of sudden, I was funny,” says Jordan reliving the moment. “I went that afternoon to the head of the theatre department, Dr Fred Beringer, and I said ‘my God, this is what I want’.”

Jordan became Dr Beringer’s first student and certainly “the very first one that showed passion” at The University of Tennessee’s new multi-million dollar theatre division. His first role would be as Dr Rance in Joe Orton’s What the Butler Saw.

“I just loved the language,” says Jordan springing into action to rein act Orton’s classic: “There were scenes where Dr Prentice says ‘You’re a nymphomaniac’ and the wife says ‘I’m not a nymphomaniac’ and he says ‘you were born with your legs apart, and you’ll go to your grave in a ‘Y’ shaped coffin!’ Well I just screamed, this was all new to me!”

On opening night Dr Beringer marched backstage with a stark warning. Fed up of Jordan’s show stealing antics, the Doc was resolute. “He had been so hard on me, other people he encouraged. But he rode me constantly, I thought ‘just give me a crumb’,” recalls Jordan. “He said ‘if you get cute, I’m gonna break your f***ing legs’ and he left. I thought ‘what is that supposed to mean’?

“We got on stage and that laughter hit me like a drug, I’m telling you I was so out of control. By the end of the play, I was practically winking at the audience. I had the last line ‘Oh had we known in these dark days what we know now’. Curtain. Thunderous applause! We each took our individual bows and I just screamed. I walked off stage on a cloud.”

What happened next has stuck with Jordan for 30 years. Dr Beringer, livid at being defied, stormed backstage and pinned the pocket-sized actor to the wall. “He was salivating,” explains Jordan. “He says ‘I told you not to get cute.’ He was just spouting gibberish, I had no idea what he was talking about. I remember it rained and I just walked the streets all night long thinking ‘Do I wanna do this?’

Perseverance ensued. Two years on and a stomach ulcer later, Jordan braced himself for his final showdown with Dr Beringer who described him as “the most infuriating” pupil he had ever worked with. “He said: ‘You are capable of genuine artistry, but you’re so f***ing lazy. You’ve been blessed with this instrument and you’re funny’.”

Beringer was tenacious and pressed him on what he really wanted out of his career. With that, Jordan places a gentle hand on my knee and leans forward with that renowned grin, he’s actually living every moment. “Just to be mean, I said ‘You know what I want? I want to walk into a 7/11 [American convenience store] in Omaha Nebraska, and I want them all to shit and just fall back in it’.

That confirmed he was in it for the fame and Beringer wished him luck and that was that. But it was this special training that instilled the love of the craft of acting in Jordan, perhaps subconsciously, that would materialise and make sense some years later. “He was so right,” smiles Jordan, pausing for a brief moment. “I wish I could find that Dr Beringer now.”

Jordan would realise in LA that the job of an actor is to be a servant to the director’s vision, a feat that has seen him re-employed time and time again. But surely he finds joy in the antics of the red carpet, he certainly appears to. “This is what I do, not what I am.”

It’s with that comment, I realise for every frivolous camp spark that flies from Jordan’s mouth, there’s three or four poignant observations, filled with insight and just the right amount of wisdom. His serious and comedic credits alike have proven Jordan is more just a celebrity, he’s a real actor.

Our chat over runs 20 minutes. We’ve talked about everything: the highs, the lows, the lefts, the rights, but is there anything Jordan doesn’t share with the public these days? Having lived with secrets all of his life, it seems not – and what’s more, his mother agrees. “My mother said ‘Son, if I live to be 105, I will never understand this deep seated need you have to air your dirty laundry. Why can’t you just whisper it to a therapist?!’ ” Jordan giggles. “She’s funny.”

As the next interviewer is ushered in and Jordan’s publicist signals to wrap things up, I can’t resist one final question. In line with that superb book, Dear Me: A Letter to My Sixteen-Year-Old-Self, and having just taken a mini trip down Jordan’s pink carpet, it seems apt to find out how that conversation would have gone. “Oh I love that,” says Jordan, his eyes widening – Bingo! That’s the question he hasn’t answered before.

“Imagine if I could say to my 16 year old self: ‘It’s gonna get so much better… Everything you’re ashamed of right now, everything you’re petrified of, is gonna turn in your favour. You’re gonna be famous for being a sissy! You’re gonna make a lot of money, people are going to want to watch you act like a sissy, all the things that you have tried to hide.

As I go to shake his hand, he pulls all 6 foot 1 of me in close for a hug. “You’re adorable.” Even though I’m sure he says that to all the boys, I’m literally tickled pink.

I walk out of the hotel and I think about how Dr Beringer had predicted an empty fame-hungry life for Jordan: After leaving uni he would go to LA and end up on some God awful sitcom and “the world would never know”. It’s clear his mentor’s training finally kicked in. “I get so much artistic satisfaction now,” Jordan would tell him.

If the world didn’t already know, after tonight honey, I have a feeling the universe will.

My Trip Down the Pink Carpet runs until 19th February 2011 at the Apollo Theatre.