Few people would have ever guessed that Avenue Q would beat Wicked to the Best Musical Tony Award, Jess Parker didn’t realise it at the time but her career would entwine with the world of puppetry teaching and inspiring others.

You originally began your theatre life on the stage, what first got you into the world of theatre?
Seeing ‘Cat’s’ at The New London Theatre when I was 7 years old. It was my first West End experience, and I sat on the front row. The moment I saw what the human body can do to replicate an animal, sing and dance at the same time, blew me away. I still remember so vividly tears streaming down my face as the cast took their final bow. I was blown away. Then I knew it was simply what I HAD to do. To be involved in this incredible industry felt like a destiny I was yet to discover.

You then transferred on to more creative roles in productions. What inspired you to make this transition and what did the transition involve?
During my first year as cast in Avenue Q in 2014, there was a definite need for a creative role within the tour and production. I have an amazing relationship with Sell a Door (Producers), and Cressida Carré (Director & Choreographer) as I had already worked for them for a couple of years on other productions at this point.

I have always been a meticulous person, and working on shows, it was the detail of production value – and maintaining it I was interested in. I became Resident Director for the following year, and I found my creative calling in that respect. I would be in the wings throughout the show, working alongside stage management, and technical departments. I would install the cast into our weekly venues and stage/re-stage numbers accordingly. I would maintain the Puppetry, and run understudy rehearsals and runs, and show watch on occasions that required me to. 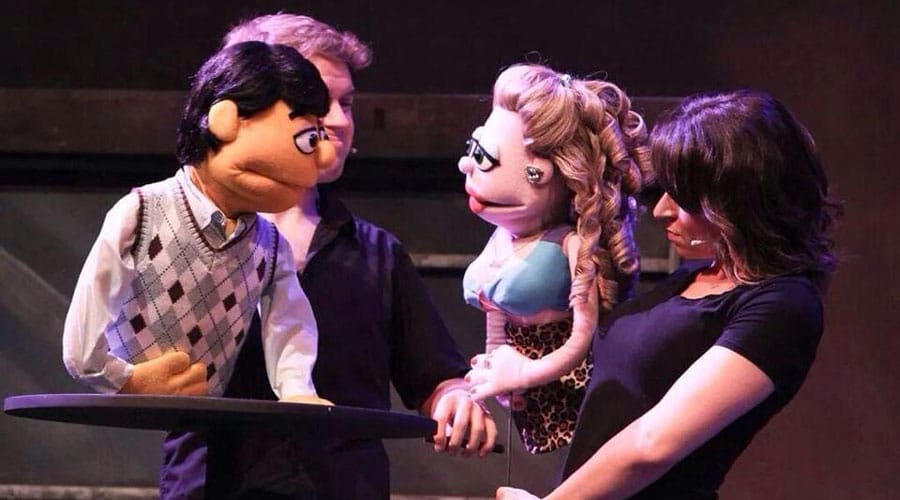 The hardest part is maintaining relationships with your company and fellow cast, and keeping things non-personal and separate when it comes to ‘work’ time. Keeping the balance of managing, and respect is something I have learnt over my years being on-stage and working with so many production staff and creatives.

Since, and up until the pandemic, I have been working as an Assistant and Associate Director and Choreographer on shows such as Jersey Boys, Six, 20th Century Boy… in addition to installing the cast production shows on Seabourn Luxury Cruise Liners with Belinda King Productions. I also became Associate Director for Avenue Q in the 2018-19 UK Tour.

Why is theatre important to you?
I think Theatre is the best way of self-expression – and even as an audience member, no matter what you are experiencing in your everyday life, theatre can transport you to another place for a magical 3hrs. It evokes thought, self-discovery, and sometimes even challenges our beliefs through the magic of storytelling.

What is your favourite part of creating a show? (The auditions, the rehearsals…?)
You know, I actually love the tech period. From the sitz-probe when you literally get goosebumps from hearing the full orchestra… seeing the set for the first time after the production company has been working tirelessly night and day… seeing the cast in costume – bringing that extra final ‘layering’ onto their characters… to completely changing your vision for a scene or staged number because the lighting designer has come up with something so magical, you can’t not!
Seeing the production ‘come alive’ in the tech is something I will never tire of, and I love every moment.

How have you been keeping creative during lockdown?
Well, I am always busy in my brain, always working to build something for others, or for myself – as I love creating new ideas. I had the idea for a business at the very start of lockdown, something that puts back into the education and theatre sectors. I’ve also been taking online Spanish lessons!

Tell us about your company ‘Parker Puppetry’ and the brilliant workshops you have on?
Parker Puppetry was created as a platform for Puppetry, where you can learn, create and inspire with Puppetry.
With the focus being on Hand & Rod Puppetry (Avenue Q/The Muppets/Sesame Street), during lockdown, I have spent hours and hours creating my own syllabus that’s easy and clear to follow with bespoke exercises students can ‘take-away’ to practise between sessions.

I have utilized my various skills as a Puppeteer, Actress, Creative Director, Choreographer and Teacher, and rolled it all into the package of Parker Puppetry!

The adult syllabus classes are called ‘Avenue’s’, (with my history with the show, it’s my tip of the hat to Avenue Q) and each Avenue focusses on a different element of the skill, enabling you to grow as a Puppeteer and move on to more Intermediate Skills.

We now have grown a wonderful community, filled with Creatives, Teachers, Ventriloquists, Performers, Voice Artists… that are now part of our ‘Parker Puppetry Army’ community. It’s really special and many new friends have been made!

I have also been doing Workshops for the education sector also, including Theatre Schools, including Practical, Sock-Puppet Making, and Lip-Sync Performances with their characters they have created at home. Puppetry is perfect for Children and Young Adults, as it encourages creativity, confidence, and motor skills. They can relate, and feed energy through their characters and it’s a joy to watch how they develop.

As we ease out of Lockdown, I am armed and ready with all my Puppets for student use for full in-person Puppetry Workshop Days… including adult courses that will offer different styles of Puppetry delivered by specialists in each sector: Hand & Rod, Live Hand, Screen work, Table Top, Marionette, Physical and Mascot and Bunraku.

And! In addition to all our teachings, Parker Puppetry also offers Creatives, Puppet Directors, Captains and Puppeteers for Theatre/Film/TV Productions.

When you pick up a puppet for the first time, how do you begin to create their character? Is it their movement, their voice…?

So I usually commission a builder to help make what I have in my head – I usually have an idea of a character, and then it’s just about bringing them to life. All the characters have an element of myself, that’s been heightened into a bold character! It’s like releasing your ‘inner cartoon’ and it’s so much fun. 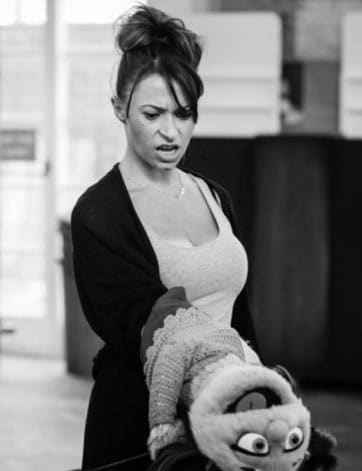 I also always do a character breakdown, as I would if I were working on a role in Theatre/TV. Doing a full character study I find helps me nail down bits and pieces that will eventually help with the entirety of the character. Where are they from? How old are they? Who is their best friend? I encourage all of my students to do the same. Because if YOU don’t know the character inside out, how will your audience see and connect with them fully?

What is one of your best/funniest memories on stage?
The funniest moment I have had on stage is when I and Stephen Arden (now one of my amazing ‘Puppeteachers’ and Creatives for Parker Puppetry) went on stage for ‘Loud’ in Avenue Q as The Bad Idea Bears. Stephen had to lead onto the stage, and then at the first point in the song where we look at each other, we jump and land. As Stephen landed with Blue Bear, one of the bear’s eyes just popped out and started rolling around the stage. I lost it. Looking at a one-eyed Blue Bear for the entire number was just the funniest thing ever!!! And Stephen had NO idea until we came offstage.

This is a very difficult time for new graduates starting in the industry. What advice would you give to them?
Hold tight. The industry WILL return back to its full force, and the skills you can pick up NOW whilst you can, do it. Your future self with thank you. That includes maybe taking courses in things you are interested in…hobbies that you can side-hustle with in the future… Yoga Teaching, Mindfulness, Beauty, Design work, endless lists of things you may love, that you can develop into something alongside your career in the future.

FIND OUT MORE ABOUT PARKER PUPPETRY