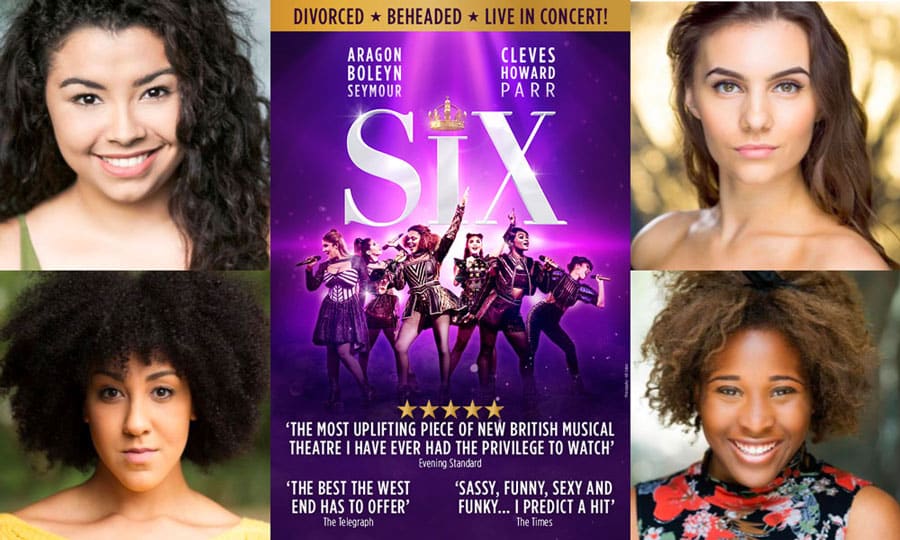 Six the musical has announced it will now play at London’s Arts Theatre untilk5 July 2020 with 85,000 new tickets going on sale today.

From July 2019, Collette Guitart will join the Arts company as a Dance Captain/Understudy. Shekinah Macfarlane will also join as Alternate Catherine of Aragon and Anna of Cleves from July through to October 2019.

Alternate casting will be announced soon.

Courtney Bowman is currently playing Fatimah in Everybody’s Talking About Jamie in the West End and was Horse in Stiles & Drewe’s The Wind in the Willows at the London Palladium. Danielle Steers was acclaimed for her vocals as Zahara in Bat Out of Hell and she recently played Carmen in Sweet Charity at the Donmar Warehouse. Her other West End shows include Beautiful, The Bodyguard and Legally Blonde. Collette Guitart was in Bat Out of Hell and 27 – Rise of a Falling Star. Shekinah Macfarlane is currently in American Idiot, and her recent shows include Hair, Tommy and Parade.

Six, by Toby Marlow and Lucy Moss, nominated for five 2019 Olivier Awards, including Best New Musical, Best Choreography and Best Costume Design, is the phenomenon everyone’s losing their head over.

The show’s 2018 debut at the Edinburgh Festival Fringe hastened its West End transfer which opened in January 2019. The production is playing to sold-out houses at the Arts Theatre and a year-long 33-venue UK tour starts at the Yvonne Arnaud Theatre, Guildford on Thursday 24th October.