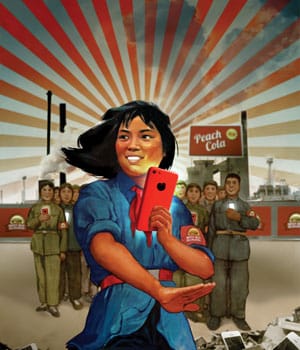 Ahead of revealing its full tenth anniversary programme, HighTide has announced that, alongside the Arcola Theatre, they will present a new play by Anders Lustgarten, which will run at the Arcola from 7th April before opening HighTide Festival in September.

The Sugar-Coated Bullets of The Bourgeoisie will reunite Lustgarten, who won the inaugural Harold Pinter Prize for If You Don’t Let Us Dream We Won’t Let You Sleep (Royal Court), with HighTide Artistic Director, Steven Atkinson, whose recent credits include Forget Me Not, peddling and Bottleneck.

Based on almost a decade of study, The Sugar-Coated Bullets of The Bourgeoisie is a timely play that explores the lives of the Chinese people in two eras, during the rise of Maoist China, and in 2016, an increasingly diverse, volatile, $11 Trillion economy on the precipice of change.

The production’s 8 strong cast of British East Asian actors includes Andrew Leung (Chimerica, You For Me For You) and Anna Leong Brophy (P’yongyang).

HighTide, focused on developing emerging playwrights, will celebrate its tenth anniversary in September 2016. The annual festival in Suffolk has showcased some of the UK’s most well-respected new writers of the last decade including Luke Barnes, Vickie Donoghue, Ella Hickson, Nick Payne, Beth Steel and Jack Thorne.