Following its sell-out season at The Other Palace, Heathers the musical will transfer to the Theatre Royal Haymarket from a strictly limited season.

The European premiere of Heathers smashed all box-office records at The Other Palace and sold out in record time prompting producers to announce that the show will transfer to the West End’s Theatre Royal Haymarket from 3 September 2018 for a limited 12 week run. 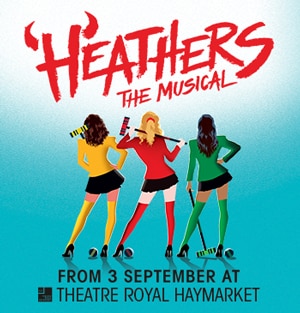 Carrie Hope Fletcher will reprise her role as Veronica Sawyer with other casting to be announced.

Heathers the musical is based on one of the greatest teen films of all time released in 1988 which starred Winona Ryder and Christian Slater. The award-winning writing team, Laurence O’Keefe (Legally Blonde, Bat Boy) and Kevin Murphy’s (Reefer Madness, Desperate Housewives) hit musical adaptation has enjoyed successful runs in Los Angeles and New York, and finally arrived in the UK for its European premiere on 9 June 2018, following a rapturous response to its 2017 workshop at The Other Palace.

Heathers the musical is directed by Andy Frickman, choreographed by Gary Lloyd design by Davied Shields lighting by Ben Cracknell, sound by Dan Sampson and casting by Will Burton.