David Dawson and Lyndsey Marshal will perform Tennessee Williams’ The Two-Character Play at Hampstead Theatre from 23 April 2020 for a limited season. 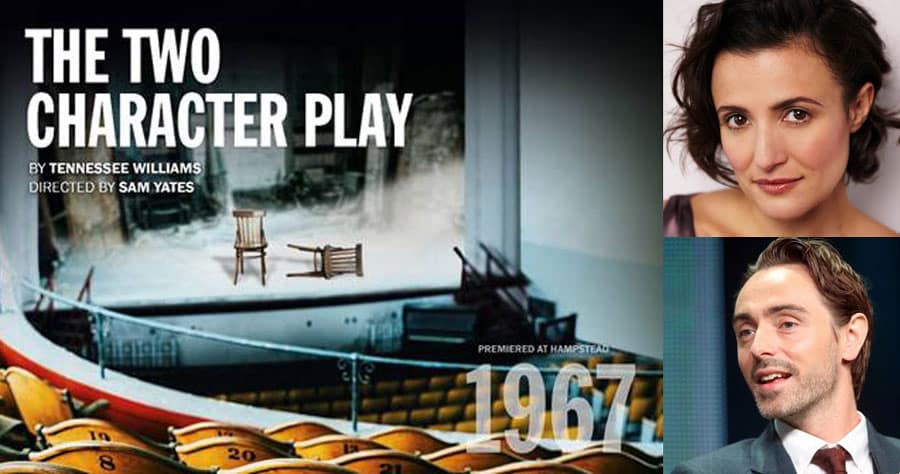 Hampstead Theatre has announced the cast and creative team for Tennessee Williams’ innovative, and partly autobiographical work, The Two Character Play.  Acclaimed stage and screen actors, David Dawson and Lyndsey Marshal, will perform in this unique two-hander which Williams called ‘My most beautiful play since Streetcar, the very heart of my life’.  The production, directed by award-winning theatre and film artist, Sam Yates, will run from 24 April until 23 May 2020.

David Dawson is an acclaimed stage and screen actor.  Recent television credits include playing Joseph Merrick (as The Elephant Man) in Channel 4’s Year of the Rabbit (2019) and starring in BBC espionage drama The Secret Agent alongside Toby Jones, Vicky McClure and Stephen Graham.  Recent theatre credits include Fairview at the Young Vic and Casimir in Brian Friel’s Aristocrats at Donmar Warehouse.

Dawson will be joined by Lyndsey Marshal, best known for her performance in the psychological film The Hours, alongside Meryl Streep, Nicole Kidman and Julianne Moore, and for her recurring roles in HBO’s Rome (as Cleopatra) and BBC period legal drama Garrow’s Law (as Lady Sarah Hill).  Recent screen credits include Mike Barnett’s ITV drama Trauma and the BBC’s New Year hit Dracula by Mark Gatiss and Steven Moffat.  She was nominated for an Olivier and Evening Standard Award for her role in Phyllida Lloyd’s production of Boston Marriage at the Donmar Warehouse.  Recent theatre credits include The Wild Duck; The Hypochondriac and Blood Wedding at the Almeida Theatre.

Tennessee Williams, one of the foremost playwrights of the twentieth century, spent over ten years writing The Two Character Play.  It was originally directed by Hampstead Theatre’s founding Artistic Director James Roose Evans and received its world premiere at Hampstead in 1967.

Fellow actors, brother and sister Felice and Clare have been on tour too long: every town looks increasingly the same until they feel they could be anywhere… Abandoned by the rest of the acting company, but faced with an audience expecting a performance, they must enact The Two Character Play. But as their gripping ‘play within a play’ unfolds, the line between reality and illusion becomes increasingly unclear; as their characters reach out to the outside world, the actors’ isolation and uncertainty grows…

The Two Character Play is directed by Sam Yates, designed by Rosanna Vize, lighting by Elliot Griggs, sound by Dan Balfour, and video by Akhila Krishnan.